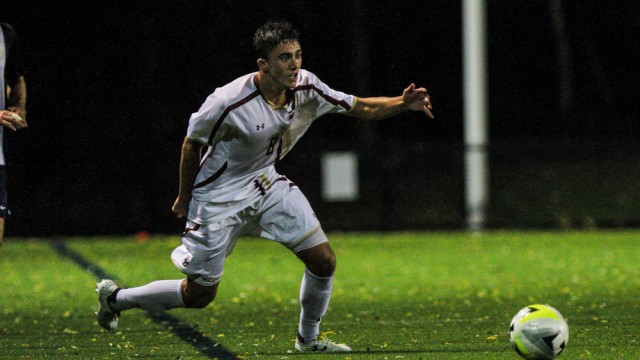 Ed Kelly Gets 300th Win In Victory Over No. 12 Syracuse

After the game, Ed Kelly could only chuckle and say he was exhausted.

The Eagles came out in a new look formation against the Orange. Opting out of the usual 4-1-4-1, Ed Kelly lined up his team in a fluid 3-5-2.

“It was a big decision for me to make the change before the last game of the season,” Kelly said. “I said the hell with it. I think it’s right, I’m gonna do it.”

To start the game, Len Zuegner controlled the middle of the backline, with Toby Ampadu and Mohammed Moro on either side. Dylan Pritchard, one of three seniors on the team, got the start as one of the two wing-backs in the midfield. In the formation, he and Abe Bibas on the other wing function as extra defenders when BC is without the ball. Raphael Salama and Henry Balf played in the middle behind Zeiko Lewis, with Simon Enstrom and Trevor Davock up top, side by side. Aside from the new numbers in the back, the addition of an extra striker up top was the key to the game, as Enstrom and Davock linked up with each other all game.

Kelly’s decision was the right one, as the formation paid off both offensively and defensively for the Eagles in the first half. When the Orange were on the attack, they couldn’t unlock the resolute BC defense, which at times had as many as five men in the backline. Pritchard or Bibas could drop back to make five at the back, or one could drop with the other pressuring on the other side.

On the other end, Pritchard was the catalyst for the first goal, as he played a ball into Simon Enstrom from a wide position in the 23rd minute. At the top of the box, Enstrom executed a brilliant turn, took a couple touches past defenders, and played Davock in on goal after a smart run. Davock scored with a clinical finish past the keep for his fifth goal of the year. Aside from the new numbers in the back, the addition of an extra striker up top was the key to the game, as Enstrom and Davock linked up with each other all game.

Eleven minutes later, the Eagles extended the lead after a giveaway by Syracuse goalie Hendrik Hilpert. After Zeiko turned and played a through ball in the direction of Davock. Hilpert came out 25 yards to win the ball, but then dribbled towards the sideline, kicking the ball right at Enstrom. Displaying composure and technical skill, the Swede neatly tucked a ball into the side netting from 30 out—no easy task—making it 2-0 for the Eagles.

The second half was all Orange, as BC dropped back a bit and looked to spring Lewis, Enstrom, or Davock on the counterattack. The pressure built as Syracuse put in cross after cross. The visitors did manage to pull one back with less than ten minutes to play, but BC’s defense stood to the task, defending and blocking shots.

Most of the credit for the win goes to goalie Alex Kapp, who fittingly put in a man of the match performance on his senior night. Standing on his head down the stretch, Kapp kept the Eagles in the lead with aggressive play, athletic saves and big clearances.

Kapp had been aggressive all night, and with just three at the back, received back passes a little more than usual, but he looked in rare form, doing everything but keeping a clean sheet. The BC keeper excelled most in the air, as Syracuse main line of attack came from crosses. He commanded the box well, doing well to get out and above the bigger strikers to make a number of big clearances with punches.

With one minute left, Kapp provided the moment of the match. After a few blocked shots, the ball fell to a Syracuse player at the corner of the six. Kapp made a tremendous diving effort, stretching out to his left to not only make the save but keep the ball in play so one of his defenders to clear the ball.

After the game, the senior handed the game ball to his coach to honor the occasion.

The milestone moment came at the perfect time for Kelly, as it happened at home, against a tough and ranked ACC opponent, and on senior night — the final game of the regular season.

“I love this place, and I’m glad it happened here,” Kelly said.