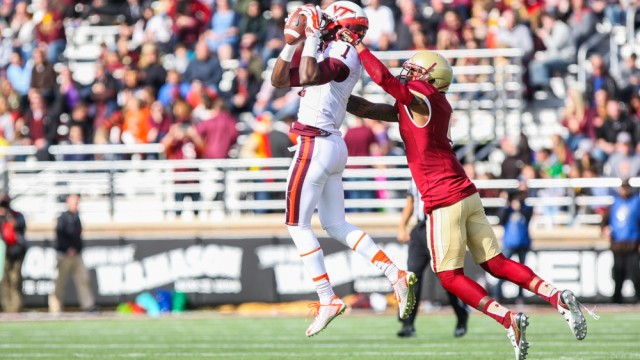 BC Offense Can’t Get Any Momentum In Virginia Tech Rout

Boston College, already down 10-0 to Virginia Tech midway through the second quarter, had just stopped the Hokies at midfield. The punt looked to pin BC within the 10, regardless of whether Sherman Alston actually caught it or not. He waved for a fair catch, allowing his gunners to try and prevent the Hokies from stopping it before the end zone—a pretty standard play for Alston.

Then that punt hit Taj-Amir Torres’ shoulder. If you listened close enough, you could hear a collective “womp, womp, womp” from the Alumni Stadium crowd.

It looked like the Hokies would put it away at that point. But as it has done so often this season, the BC defense bailed out its offensive and special teams miscues. Strong safety John Johnson perfectly read Michael Brewer’s first down overthrown pass to Bucky Hodges, tracking it in the end zone for a pick and the touchback.

But as it has done so often this season, BC’s offense didn’t return the favor.

Two plays after Johnson’s momentum-swinging interception, true freshman running back Jordan Gowins—the same player whose fumble lead to Wake Forest’s only field goal in the 3-0 debacle—couldn’t hold onto the ball again. This time, it led to a scoop-and-score by linebacker Andrew Moutapuaka, and a 17-0 lead for Virginia Tech (4-5, 2-3 ACC).

Just like that, a game that was still in reach for the best defense that BC (3-6, 0-6 ACC) has had in recent memory quickly became a disastrous blowout for possibly the worst offense that the program has ever had. And with their sixth loss, the Eagles have been virtually eliminated from postseason play and can no longer control their own destiny. Their only chance of making it relies an insufficient amount of ACC teams qualifying for a bowl, along with BC winning all three of its remaining games.

Offensively, the Eagles struggled on their first two drives under soon-to-be ex-starting quarterback Troy Flutie. His only two drives—BC’s first two of the day—led solely to frustration: run, run, sack, punt on the first one; run, run, incompletion, punt on the second. At that point, head coach Steve Addazio pulled Flutie for John Fadule, a freshman walk-on who, as recently as last week, was on the scout team. Addazio noted that his staff planned to use both Fadule and Flutie for equal amounts of drives early in the game before going on feel for the remainder of the way. Like earlier in the season, when he switched between Flutie and Jeff Smith (who was out today with a concussion), Addazio called this system a “performance-based deal.”

Immediately, Fadule cashed in on that deal. He ran for 25 yards on his first collegiate play, finishing the day as the Eagles’ leading rusher with 53 net yards. “I think the energy rippled through the team a little bit,” Addazio said of Fadule’s performance.

Yet that energy couldn’t translate into points. BC’s young offensive line, which now largely relies on three young starters who weren’t projected to see considerable time this season—Chris Lindstrom, Aaron Monteiro, and James Hendren—had trouble stopping the Hokies’ pass rush. The O-Line also couldn’t open any holes for the running backs, who didn’t do themselves any favors. Myles Willis, Tyler Rouse, Sherman Alston, Richard Wilson, Bobby Wolford, and Jordan Gowins combined for 28 yards on 18 carries. Of course, a large part of that comes from BC’s predictable offense—these smart ACC defenses, many of which rank in the top 30 in the country, load up eight or nine in the box on every BC offensive set. Willis doesn’t believe that’s an excuse.

“If they want to load nine in the box, that’s the same thing that [former BC running back Andre Williams] faced, and he managed to make plays,” Willis said. “I just got to figure out what I can do to get more production.”

At times, you could see Addazio actually adjust and stray from his painfully conservative and predictable game plan. He went for it on fourth down, even when the game seemed out of reach—some of the conversions were successful, too. He pulled out the unbelievable from his playbook—long passing plays!—which Fadule perfectly executed on BC’s lone touchdown drive.

Nevertheless, the same excruciating play-calling appeared at times. Down 23-0 in the third quarter, deep in Virginia Tech territory with little to lose, Addazio opted for Mike Knoll to kick a field goal. Perhaps it could’ve been a confidence booster for his beleaguered kicker, who had missed one earlier in the game. But the move still elicited deafening boos from the crowd, the first time this season they were loud enough to be heard from the press box.

That’s not to say the defense played a perfect game. Aside from the fumble recovery, the Hokies still scored 17 points. Travon McMillian gained 105 yards on the ground, the first 100-yard rusher the Eagles have allowed this season. Brewer picked apart a secondary down its two best men—Kamrin Moore (lower leg, out for the year) and Isaac Yiadom (right shoulder, out for the game)—for 180 yards on 15-of-21 passing. Their biggest play was also for naught, as a forced fumble returned for a touchdown was ruled down and unreviewable on account of forward progress.

In spite of that, and in spite of the fact that it often had to work with a short field and got little rest, the defense still played excellently. Matt Milano and Steven Daniels each bolstered their push for a Butkus Award nomination, rattling brains with hard hits and a sack apiece. The secondary stayed disciplined without its starters, something that can’t be said about the Hokies, who committed five pass interference penalties. And overall, as it has all season, the defense gave the offense a chance to win the game. But the offense just couldn’t match.

And whether you want to blame injuries, or youth, or time management, or inexperience, the Eagles couldn’t win an ACC game—as they haven’t all season. And now, with a bowl game virtually out of the picture, their consistent shortcomings will force them to play for pride the rest of the way.