Home » BC Shuts Out Huskies For Second Time Over Weekend 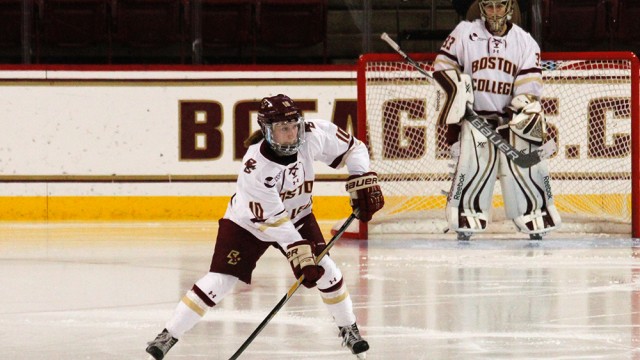 BC Shuts Out Huskies For Second Time Over Weekend

Home-and-home series offer an unusual opportunity for two teams to get a feel for each other, playing 120 minutes over the course of two days.

Boston College women’s hockey had that opportunity this weekend against the University of Connecticut. After decisively handling the Huskies (3-3-2, 0-3-0 HEA) in Chestnut Hill on Friday night, the Eagles (10-0-0, 3-0) once again took care of business in Storrs, Conn., on Saturday afternoon by a score of 4-0. Saturday’s game was similar to Friday’s, offering a good glimpse into just how dominant the Eagles can be.

Saturday’s game was a good road test for the Eagles against a league opponent, but the Huskies proved to be no match for BC. The first period was quiet for both teams, resulting in no goals from the Huskies or the Eagles. When the second period began, the action and the scoring really got going for the Eagles.

Megan Keller was first on the board for the Eagles, recording her first of three points in the game. This goal for Keller came at the 4:42 mark off a feed from Kali Flanagan, who had received the puck from Kenzie Kent. As the second period neared the end, the Eagles cashed in on an opportunity again, scoring their second goal of the day. This time the goal came off a power play for the Eagles at the 19:47 mark. Haley Skarupa got herself on the scoresheet, redirecting a shot off the stick of Keller. The goal put the Eagles up 2-0, giving them a comfortable lead heading into the third period.

At the start of the third, the Eagles added another tally. This time the goal came off the stick of sophomore Kenzie Kent, who was set up for the goal by Alex Carpenter. Scoring once again on the power play, Kent—while screening the UConn goalie Elaine Chuli—redirected a shot from Carpenter and put the puck right past Chuli. Keller also recorded her third point of the game on the goal by Kent. This goal allowed Eagles to grab control over the game and solidify a decisive advantage over the Huskies. Despite the commanding 3-0 lead, the scoring was not yet over for the Eagles.

The Eagles’ fourth goal came off the stick of Flanagan at the 10:37 mark of the third period. Flanagan received the feed from Skarupa at the point and fired a shot past the UConn goalie. Flanagan’s goal was her third point of the game, the second three-point effort of the sophomore’s career.

“I thought our team did a nice job of staying focused through the whole game,” head coach Katie Crowley said. “Connecticut is a very physical team and we played well through that. It was a nice weekend for us, coming out with four league points as we head into two tough games against Boston University next.”

A basic review of the stat sheet shows BC’s dominance. The most glaring difference for the two teams was the shot advantage that the Eagles had over the Huskies—BC outshot UConn 45 to 11. BC also dominated the faceoff circle, winning 40 out of 54 faceoffs, good for 74 percent of the game’s total. Even when it came to penalties, the Eagles were in the box one fewer time than the Huskies.

Saturday afternoon’s game was an extension of several streaks for the Eagles. They continued their unbeaten season at the same time as recording their third straight shutout. In addition, Saturday marked the eighth straight time that the Eagles have defeated the Huskies. Looking forward, the effort on display from the Eagles on Saturday afternoon will need to continue and perhaps increase, even, if the Eagles really plan to achieve their ultimate goal of a national championship.

uconn alex carpenter
Reasons To Keep An Eye On BC Football (But Only One Eye)
Eagles Force OT In Draw With No. 3 Florida State