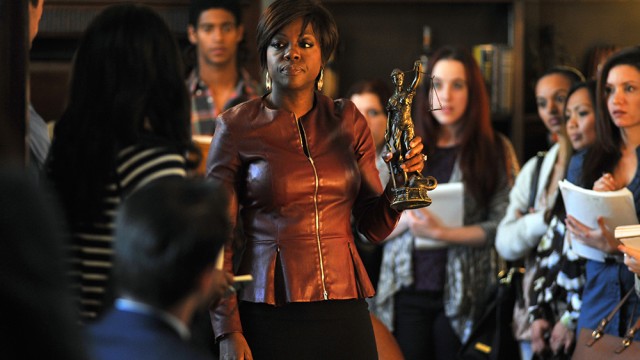 When Viola Davis ascended the stage last month to accept the Emmy for her role in How to Get Away With Murder, she accepted the award not only as the first black actress to win for best actress in a drama series, but on behalf of the women of color who were limited by the large diversity gap in Hollywood. “You cannot win an Emmy for roles that are simply not there,” Davis said, before going on to thank other prominent black actresses in the entertainment industry. “So here’s to the Taraji P. Henson’s, the Kerry Washington’s, the Halle Berry’s, the Nicole Beharie’s, the Meagan Good’s, to Gabrielle Union: Thank you for taking us over that line.”

Ever since the show’s inception last fall, Davis has courted both critical praise and numerous accolades for her lead role as Annalise Keating, a criminal law professor at a prestigious Philadelphia university who helps four of her students cover up a complicated murder plot. The show itself has challenged white, heteronormative depictions of race, gender, and sexuality on prime time television. While Keating is a ruthless defense attorney who runs her law firm with an iron fist, one episode sees an emotional Keating removing her wig and makeup after a draining scene, revealing her natural hair..

Davis has been dismantling Eurocentric standards of beauty and exposing the marginalization of black women in the media to “mammy” roles throughout her time in the spotlight. In her acceptance speech at the People’s Choice Awards, Davis called out a New York Times article that labeled her “older, darker, and less classically beautiful” than fellow actresses Kerry Washington and Halle Berry and characterized her as an “angry black woman.”

The show boasts a diverse cast with four people of color as its main leads. Alfred Enoch plays Wes Gibbons, a student who was recently admitted to the school off the waitlist. Michaela Pratt (Aja Naomi King) is a highly-ambitious lawyer who emulates Keating and dreams of one day rising above her socioeconomic status. Laurel Castillo (Karla Souza) is a shy, but determined Latina student who begins an affair with Frank, one of Annalise’s defense attorneys.

What the show gets right is, rather than merely stopping at representation, HTGAWM seeks to normalize race and sexuality through authentic depictions of human experiences. In one episode, we watch as Connor Walsh (Jack Falahee) sleeps with a client’s male secretary in order to win a case. The show never shies away from realistic portrayals of gay sex—something that has normally only been attributed to heterosexual sex scenes on prime time. Rather than creating characters who embrace their own stereotypes, showrunner Shonda Rhimes and writer Peter Norwalk normalize Walsh’s sexuality. Much like Keating who operates with a shaky moral compass, Walsh is both narcissistic and manipulative yet still possesses redeemable qualities. In the same way that Keating gives representation to marginalized racial groups, Walsh is written as a fully-developed, flawed character instead of relying purely on stereotypes.

Rhimes claims that she isn’t “diversifying” television but “normalizing” it. “I really hate the word ‘diversity,’ it suggests something other. As if it is something special. Or rare,” Rhimes said in her acceptance speech at the Human Rights Campaign Gala. “As if there is something unusual about telling stories involving women and people of color and LGBTQ characters on TV.”

Programming such as NBC’s Black-ish, the CW’s Jane the Virgin, and ABC’s HTGAWM are paving the way for progressive portrayals of women, LGBTQ characters, and people of color on prime time television. In the same way that producer Ryan Murphy missed the mark with Glee and Scream Queens. HTGAWM  is unraveling traditional standards of beauty and giving nuance to its marginalized characters by portraying them as real people instead of relegating them to caricaturist stereotypes.

days of summer how to get away with murder
LTE: A Letter From Eradicate #BostonCollegeRacism
The Neighbourhood Gets Bigger And Just A Bit Better