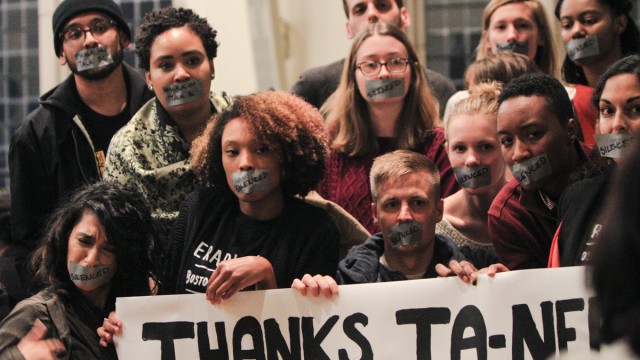 LTE: A Letter From Eradicate #BostonCollegeRacism

Eradicate #BostonCollegeRacism is an anti-racist organization and movement, created and sustained by people of Color and white people from across Boston College. Like others, we were profoundly disappointed by BC administrators’ silence about high-visibility police murders of Black youth and adults, including Mike Brown and Eric Garner, as well as judicial failures to hold accountable the officers responsible. We could not accept threats of punishment brought against students and faculty who chose to express their own grief and indignation by staging a die-in at St. Mary’s Hall. Their action brought respectful recognition of systemic violence against people of Color to BC and clarified the operation of institutional racism within the university. Our group is dedicated to furthering this analysis and bringing about change in the policies and practices that constitute and sustain institutional racism at BC.

While the University provides many resources on racial diversity, diversity programming and other forms of dialogue do little to right material inequities caused by institutional racism. These inequities continue to be expressed and enforced through Eurocentric biases in BC’s curricula, policies that silence students of Color and their allies, and recruitment and retention practices that prevent people of Color from joining and advancing in the faculty, administration, and board of trustees—realities that leave other diversity initiatives inadequate. To put this observation more concretely, people of Color represent only 14 percent of tenured and tenure-track faculty (as of 2010), 12 percent of senior academic administrators, 9 percent of senior non-academic administrators, and 4 percent of deans and vice presidents. A campus operating under these conditions will never be a genuinely inclusive or equitable place for people of Color or an environment where white people can readily learn how to contribute to the elimination of racism from society. Until BC becomes a place where administrators publicly discuss and commit to timelines to change such conditions, its commitment to racial justice will remain suspect and require continuing critique.

Eradicate has brought such critiques to light through infographics (both displayed and not displayed), protest and direct action (including a silent protest inspired by the work of Ta-Nehisi Coates and a plane flyover at graduation), social media, and community-building through retreats and monthly potlucks. The group has been met with backlash from the university—with members of the Boston College Police Department ripping flyers out of students of Color’s hands at Modstock and saying to a female student of Color, “This is private property. I’ll touch you as much as I want to.” Students’ statuses have been threatened, a department has blocked and censored content on a student-faculty listserv, and most recently, the Provost’s Office has denied a group of faculty permission to post flyers with content made by Eradicate, a blatant violation of academic freedom. These attempts to silence our work have further illustrated institutional racism at BC and served to strengthen our cause. They suggest that BC’s leaders have decided that it is better to silence critical analysis than to hold themselves accountable for the University’s ongoing role in perpetuating racial injustice.

Eradicate is fundamentally a call to the potential of BC and its Jesuit mission of social justice. As the facts stand, the mission of the University is out of step with its actions. Faculty and students have observed for decades the forms of institutional racism cited by our group, and yet these realities stand with little indication of dissatisfaction or stated plans for change from University President Rev. William P. Leahy, S.J., or other leaders. The action of these figures is essential to achieving anti-racist change, and they hold final responsibility when such change fails to be realized.

We have been told by administrators that there are ways of doing things at BC—institutional channels through which to pursue reform. In effect, we have been told that BC leaders will make changes when they are ready and not because members of the BC community are calling for them. Allowing people who benefit most from the status quo to decide how and at what pace to institute change is the definition of injustice. Students, alumni, faculty, and staff have the collective power to hold these figures accountable by calling attention to institutional racism at BC and expressing disagreement with decisions that obscure this serious problem.

We believe all members of the BC community—of all backgrounds, political orientations, and institutional positions—are capable of making the choice to help end institutional racism. Some already have, taking action in ways that are worthy of recognition and respect. We are grateful to and inspired by these groups: among them, The Heights Editorial Board, the Center for Human Rights and International Justice, Climate Justice Boston College, FACES, the Undergraduate AHANA Leadership Council, the African and African Diaspora Studies Program, the Black Law Students Association, the Graduate Students of Color Association, and the Black Student Forum. Others clearly feel this call and seem to be searching for guidance. If we support one another, we can bring material change to BC.

Our work through Eradicate has already taught us the transformative power of working together to eradicate institutional racism. We hope you will support not only initiatives that recognize diverse identities, but also efforts like ours that address inequalities for marginalized groups. If you are interested in working with us, we encourage you to come to our weekly planning meetings on Tuesdays at 5 p.m. and our first Friday monthly potlucks. For more information and to keep up with our latest news and events, follow us on Facebook, Twitter, or Tumblr, or email us at [email protected] to be added to our listserv.

Our connections to one another as we pursue this work are important to sustaining possibility. However, such relationships are not a substitute for addressing historical and contemporary inequity on campus. Until that change comes, we hope few will choose to remain silent. #WalktheTalkBC.

eradicate boston college racism ta-nehisi coates Fr. William P. Leahy
Programming For Wounded Soldiers Would Work At BC
‘How To Get Away With Murder’ Is Paving The Way For Diversity In Prime Time