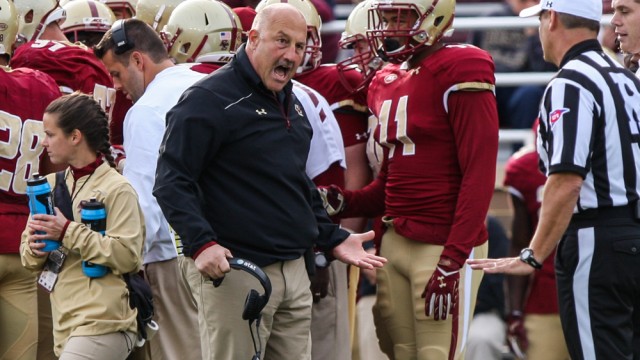 I get it, Boston College football fans. This is not the situation we all thought the Eagles would be in at this point in the season. Sure, there was bound to be some sort of regression. BC had lost a lot of its misfit toys from the Frank Spaziani-era that Steve Addazio had mangled together just enough to manage two consecutive 7-6 seasons. And of course, the Eagles were helped by two of the most special players in program history: Andre Williams and Tyler Murphy. Now, the Eagles would rely on Addazio’s youthful and inexperienced recruits.

Still, no one expected BC to sit at the very bottom of the ACC—I predicted another 7-5 regular season, with a worst-case scenario being 5-7. Injuries have played a huge part in the team’s slow descent to ineptitude, and you can argue that a healthy Jonathan Hilliman or even Darius Wade would’ve helped the Eagles win their games against Wake Forest, Duke, and possibly even Louisville.

But at this point, the what-ifs won’t help anyone. From here on out, as Addazio admitted willfully in his press conference on Saturday, the Eagles are playing for pride. For a team that has been as beleaguered as BC has been this season, that’s not nothing.

So what should we—the media, fans, coaches, and Brad Bates alike—look forward to throughout the rest of the season? Surprisingly, there’s plenty. It doesn’t mean you should necessarily spend your money on it by heading out to Alumni Stadium—I won’t say don’t do that, but I won’t trick you into doing it either—but if you want to observe from your couch by watching on the highly-esteemed ACC Digital Network, I promise you’ll be entertained … or at least intrigued.

Who will step up in the secondary?: A big reason the Eagles lost against Virginia Tech is that they were down their two best cornerbacks: sophomores Kamrin Moore and Isaac Yiadom. Moore is gone for the rest of the season with a lower leg injury that required surgery, while Yiadom left midway through the game holding his right shoulder. Though both will certainly be significant pieces to BC over the next two seasons, and certainly don’t look to lose their starting positions next season based on others’ performance, the Eagles will lose safety Justin Simmons next season. Thus, it’s up to Gabriel McClary, William Harris, and Taj-Amir Torres, among BC’s other underclassman defensive backs, to prove to the coaching staff that they deserve consideration on the starting unit.

Enjoy Steven Daniels while he lasts: BC’s most exciting defensive player is the biggest loss for the team among this senior class. Although defensive coordinator Don Brown’s crew will likely do just fine in replacing him, Daniels still brings a dynamism to this defense as both a pass rusher and run stopper that cannot be ignored. He’s a game changer, as he proved in his domination of Louisville’s offensive line. Soak him in, because he’ll be off for the greener pastures of the NFL (or the doldrums of regular personhood if no team can see how talented he is) in a mere three weeks.

Just how good can Matt Milano be?: At early season practices, you would never find Brown spending time screaming at the defensive line or the secondary. Nope, Brown just kept shouting at the top of his mustache—er, lungs—at that linebacking corps. Well, there’s no chance he yells at them anymore, and that’s largely thanks to Milano, the team’s biggest surprise. The junior out of Orlando, Fla. has broken through the proverbial brick wall like the Kool Aid Man (or Andy Reid) announcing his presence to a group of unsuspecting and thoroughly frightened third-graders, notching a team-leading 6.5 sacks and 12.5 tackles for loss.

Will Michael Walker break one of those tackles?: One of the silent benefits of having Myles Willis succumb to a brief injury was discovering Walker as a prime option for returning kicks. He has added an air of explosiveness to a team ranked dead last in Explosive Drive Rate (OEx), which is measured as the number of drives that average 10 yards a play. If Walker can break a couple of tackles and bring one to the house, that’ll not only be a boost to the Eagles, who desperately need the best possible field position, but maybe he can convince Addazio to put him on punt returns, too.

Can a backup quarterback distinguish himself?: Trust me, I want to watch these quarterbacks even less than you do. The trio of Jeff Smith, Troy Flutie, and John Fadule has performed, by actual ACC standards, terribly. (And yes, for those of us lauding Fadule’s performance against Virginia Tech, it’s just in relation to what Smith and Flutie have done.) Now, they must perform well enough to ensure that Addazio will have a reliable enough option as a backup in the event that Wade succumbs to injury again. My only fear is that, in Addazio’s mind, they’ll do too well and will displace the soon-to-be redshirted quarterback to start the season.

BC could upset Notre Dame (theoretically): Listen, you want pride? I’ll show you pride, Steve. Go out there and upset the only ranked team left on the schedule in a ballpark that the Fighting Irish don’t deserve to win in. Fenway Park is BC’s house (by proxy). And a win against Notre Dame may hold over the anger juuuust enough to have Addazio come into next season with a clean and happy slate.

Lord, show me a wide receiver!: Granted, this is largely not the fault of the wide receivers themselves as much as the play-calling. Nevertheless, it’s been hard to see which wideouts on the roster will come in as Wade’s primary options next season. Dave Dudeck and Bobby Swigert are graduating, so it might do Addazio best to allow his younger guys get into games. Thadd Smith, Elijah Robinson, Charlie Callinan, and Drew Barksdale should all be tested as much as possible for Addazio to see what he’ll have to work with next year. If BC’s couple of quick passing-heavy drives with Fadule is any prediction of the future, they’ll have the opportunities to do it.

Let’s get some practice in for the big men: As much as I love Harris Williams and his animated parents, it’s time to see what the Eagles have in store at right guard. Addazio has already taken a step ahead by starting James Hendren, Chris Lindstrom, and Aaron Monteiro, it would do him well to see what else the offensive line has in store for next season.

Prepare yourself for the malaise of rebuilding processes: Brace yourself, because it’ll get worse before it gets better. Watching a team clearly struggle will also prepare you for the men’s basketball season, as Jim Christian attempts to see what his seven freshmen can do in real game action. Though in fairness, the way A.J. Turner, Jerome Robinson, & Co. have looked thus far in practice, this team may be farther ahead of the rebuilding train than we had originally pegged them.

Bargain your happiness now for excitement later: The more you watch losses, the more you’ll be excited for the wins. I’ve learned that through my years cheering on that baseball team from Queens. And it comes down to this: if you watch football lose enough, and are angry enough about its losses, well doggone it, you’re gonna love hockey season.