Home » LTE: The Only Race We Should Be Talking About Is NASCAR 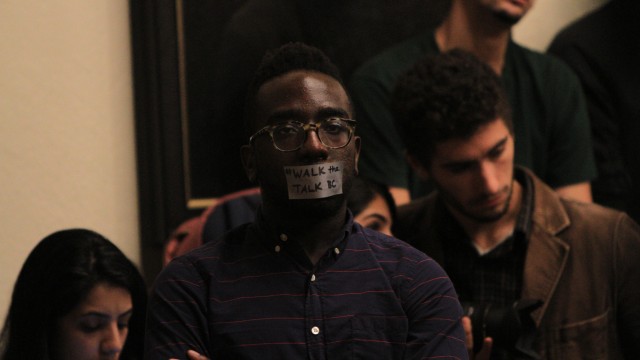 LTE: The Only Race We Should Be Talking About Is NASCAR

I truly didn’t mean to write. Karl Salzmann’s recent LTE, “A Response to ‘The Heights’ Coverage of Coates’ Talk,” however, forces me to pick up my pen—well, laptop. I’m typing this. You get the point, though.

I would like to commend Mr. Salzmann for summoning his inner Trump and saying exactly what’s on his mind, despite the possible consequence of looking ignorant. I would also like to express my appreciation for Eradicate #BostonCollegeRacism, whose thought-provoking demonstration got this conversation on race started in the first place.

But I have a problem with talking about race: conversations about race, about skin color and identity, are too complex and divisive. People feel awkward. Feelings get hurt. You know what’s not complex or awkward and doesn’t hurt any feelings? Man and machine in perfect harmony burning rubber around a circular track at over 200mph for hours on end. That’s right, baby! Start your engines! I’m talking about NASCAR.

When we talk about NASCAR, we don’t have to question Boston College’s adherence to the Jesuit mission of justice with which it so proudly brands itself. Instead, we can focus on the hundreds of miles of exhilarating competition. Mano e mano. There’s no time to think of our campus’ racial climate when things are getting hot and heavy down on the track. We all just need to come together, black people and white people, Muslims and Catholics, male and female and gender nonconforming, to watch Landon Cassill dominate in the AAA Texas 500 this weekend.

Why would we ever point out the administration’s callousness in trying to punish students for dramatising the urgent crisis of racial violence when there’s a big race just a couple days away? If I wanted to, I could recall a famous preacher saying in his most famous speech, “We can never be satisfied as long as the Negro is the victim of the unspeakable horrors of police brutality.” But instead, I’m just going to focus on how satisfying that cold milk must taste after a first-place finish at the Indy 500. Mmm, victory lactose!

Why would we begin the herculean task of attempting to reconcile BC’s Jesuit mission of being “men and women for others” with the institution’s accused institutional neglect and racism toward oppressed people right on their own campus. I don’t want to belabor the irony that Eagles are sent out to “set the world aflame” might have forgotten to light a match on their own campus.

All this talk about fire and flames has made me think of when Reed Sorensen’s stock car was engulfed by a blazing fire after a devastating crash at Richmond. Wow-ee! Is there anything more thrilling? Is there anything that makes you feel more alive? I say nay.

I also say nay to discussing white privilege. Is acknowledging its existence enough, or does more need to be done? What can be done, considering the evils and systematic racism of the past are irrevocable? How the hell did a freshman have the audacity to say he feared white people would be oppressed in the future? Oh, man—these conversations make my head go in circles. Circles? NASCAR! Pit stops! America’s sport!

Some might say that conversations on race, albeit unending and impossibly multidimensional, can lead to understanding and even a call to action. One could also say that these conversations should probably go further than BC’s one cultural diversity core requirement. The boldest among us might even say that a Jesuit university is obligated to facilitate and promote an honest, multifaceted, integrated Dialogue on Race—and only with this concerted effort is progress possible.

But why bother? I’d rather watch drivers progress up to the top of the Sprint Cup rankings, instead. Right now it’s an eight-way tie for first, can you believe it!? What a rush!