Home » BC Falls To No. 2 Clemson In ACC Tournament 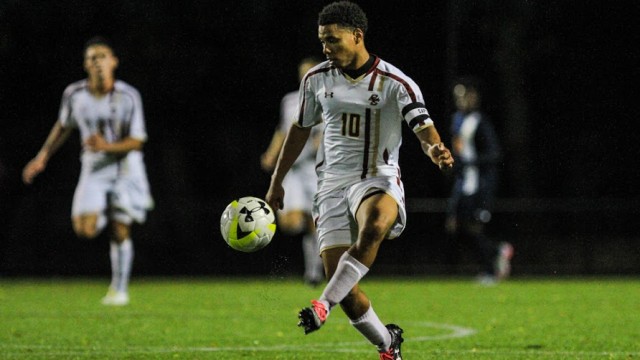 BC Falls To No. 2 Clemson In ACC Tournament

With about 13 minutes left in the first half, Clemson goalkeeper Andrew Tarbell picked up the ball for the first time. A long ball played by BC out of midfield rolled into the box and Tarbell scooped it up for the punt.

For the other 37 minutes of the half, Tarbell was not forced into any action, as the ball was mostly in Clemson’s offensive half

This trend continued for the rest of the game, as Clemson (16-1-2, 7-1-1 ACC) handily defeated Boston College (9-8-1, 4-5-0 ACC) 3-0 in the quarterfinals of the ACC Tournament.
While possession percentage statistics are unavailable for college soccer, the stat line shows Clemson’s utter dominance in the first half. The Tigers jumped all over the Eagles, outshooting their opponents 11-0 and winning eight corners.

Alex Kapp was under extreme pressure in the opening half-hour, as Clemson sent most of their eight corner kicks directly at Kapp, who was surrounded by a slew of players. The direct corners put Kapp’s body in the line of fire. In one particular instance, Kapp went down for some time after he collided with Andrew Burnikel right on the goalline. Kapp survived the initial onslaught, however, as he commanded the crowded box.

A combination of Michael Melvin out wide, Imam Mafi and Saul Chinchilla in the midfield, and Burnikel up top for Clemson outworked and out-skilled the Eagles’ backline all game. They all showed an ability to make moves, dicing up and getting past two or three defenders at a time to get into the box.

Yet the Tigers still couldn’t capitalize on the number of shots from close range. Toby Ampadu looked strong in the clean-up play and BC’s defense held on, able to block shots and only forcing Kapp into making one save while the rest of the shots went wide, but the Eagles could only sustain the pressure until the 37th minute, when Clemson finally broke through.

Mafi had the ball at the corner of the 18 and turned Derek Lyons around with two quick step-overs and fakes to get to the endline. He sent a ball into the box over the head of Mohammed Moro to an unmarked Burnikel, who headed it down and in to put the Tigers up one.

Despite being under siege the entire half, the Eagles limped to halftime only down one goal.

BC came out strong in the second half for the only succession of plays in which the Eagles put any pressure on the Tigers.

Zeiko Lewis won a free kick from about 25 yards out. Dylan Pritchard hit a beautiful strike over the wall that was headed toward the top corner, but Tarbell dove to his right for the full-stretch save, pushing the ball out for a corner.

The ensuing delivery from Henry Balf fell to Moro at the top of the 18, who ripped a shot on goal that Tarbell tipped over the bar. The Eagles couldn’t capitalize on the second corner, though.
Clemson doubled the lead in the 56th minute on an own goal. Chinchilla and Grayson Raynor combined for a give-and-go into the box. Chinchilla’s cross on the ground missed a teammate, came off the foot of Pritchard, and rolled into the back of the net past the outstretched Kapp.

The final nail in the coffin of BC’s season came 11 minutes later as John Cajka assisted Kyle Murphy on a through-ball.

The rest of the game carried on with no significant action as BC emptied the bench a bit, giving playing time to senior Ado Kawuba and freshman Dan Croteau.

Save the one stretch at the start of the half, the Eagles were never in the game as Clemson, one of the top scoring teams in the country, was relentless on the attack.

The likes of Trevor Davock, Simon Enstrom, and Lewis, who have been the firepower for BC’s offense, were held in check by the Clemson defense, and neither of them registered any one of BC’s two shots on goal and three shots overall.

The Eagles’ season is not officially over as a potential NCAA tournament bid looms, but their hopes of more success in conference play ended abruptly in a game where the opposing goalie was rarely called into action.

zeiko lewis clemson simon enstrom
LTE: A Response To ‘The Only Race We Should Be Talking About Is NASCAR’
BC Splits At Home Against North Carolina Opponents