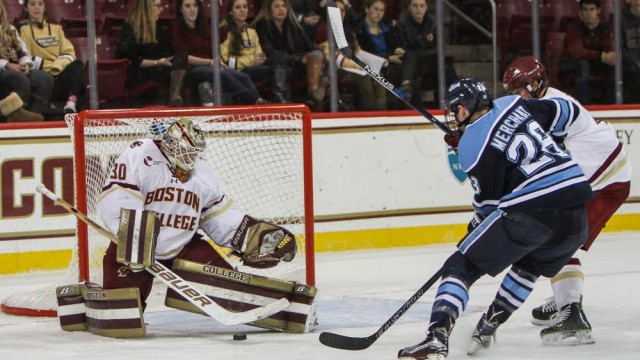 A shot by a University of Maine forward flew right in front of the Boston College goal. McCoshen, the Eagles’ star defenseman, tried to block the snipe, yet it caromed off his skate and ricocheted toward the net.

Fortunately for the Eagles, they’ve got the best goaltender in the country.

Thatcher Demko, who had his head affixed toward the boards where the forward shot from, quickly shifted his body and hips toward McCoshen. With cat-like reflexes, Demko dropped his knees, stopping McCoshen’s shot right under his bottom.

Amazingly enough, that wasn’t even the best save by Demko in the game.

In the third period of a 2-0 win by BC (8-1-0, 3-0-0 Hockey East) over Maine (0-6-3, 0-2-0 HEA), Demko made a stop that looked eerily similar to his brilliant save last season against Vermont. Shortly after BC scored its second goal—a power play gino by Colin White—the Black Bears got their best opportunity of the day on a slick breakaway. The shot came in on Demko’s left side and he deflected it off to his right. Maine’s Sam Becker recovered the rebound, salivating at the sight of twine, clear as day in front of him.

But somehow, Demko was there. He sprawled out to the right, going into full extension mode with the glove, as chants of his name rang out throughout Kelley Rink.

As soon as BC head coach Jerry York sat down at his postgame press conference, he said what was on everyone’s mind. “You got to talk about Thatcher Demko,” he said.

Right now, it’s hard to ignore him. The goaltender just shut out his sixth opponent in BC’s last seven games. Sound impressive? That’s because it has never been done before. According to BC Hockey, this is only the second time in college hockey history that a goalie has blanked his opponents in six games during a seven-game stretch. Only Lake Superior State’s Blaine Lacher has done it before him.

If those aren’t numbers that make your eyes pop, take a look at these. Demko now has a .974 save percentage and a .668 goals against average—both totals lead the country. For comparison, UMass-Lowell’s Kevin Boyle is the closest behind him statistically among goalies who have played the same number of games (nine). He has a .949 save percentage with a 1.422 goals against average.

And he even got into the scuffles a bit, too.

The Eagles kept up their newest moniker—the Beacon Street Bullies—in Sunday’s game, constantly pushing and shoving against a chippy Maine team that has had a trying beginning to its season. In fact, Demko helped convince those pesky Hockey East refs to give Mark Hamilton an interference penalty midway through the second period. Hamilton came after Demko, who proceeded to push his face, doing just enough to put him in the box without earning a penalty of his own.

That doesn’t compare to the fight that broke out toward the end of the game.

At 16:15 in the third period, a scrum ensued following Maine goalie Rob McGovern’s sharp save. Quickly, everyone on the ice got into it. BC freshman Casey Fitzgerald took on Black Bear captain Steven Swavley, cornering him against the boards one-on-one in a tough round of fisticuffs. Colin White went up against McGovern, earning both a trip to the box. York admitted after the game that he had never seen a goaltender actually be forced to serve out his penalty. In total, the two teams combined for four roughing penalties, a slashing call, and six 10-minute game misconducts.

York had no problem with the team’s ability to show some grit, but recognized the importance of losing White, Fitzgerald, and Wood—three freshmen—for the game’s crunch time. “You still got to control your emotions,” York said.

Nevertheless, it all came down to the man between the pipes. And when Ryan Fitzgerald scored the opening goal following his one-game disqualification on Friday, that creeping feeling came over everyone in the stands.

The way Demko is playing? That game was over the second the Eagles got the lead. 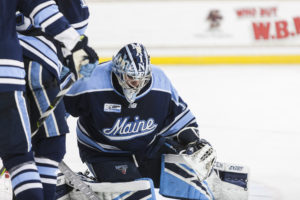 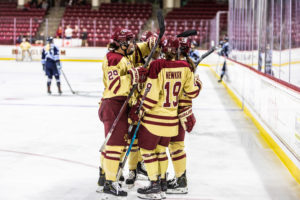 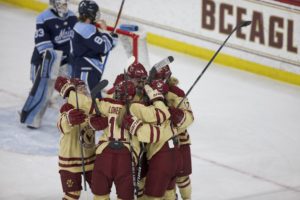