Home » Bieber Mural Is Display Of Public Art With A ‘Purpose’
Metro, Arts

Bieber Mural Is Display Of Public Art With A ‘Purpose’

Turn right on S Huntington Ave. No, you’re not going to the South End. I said turn right. We’re Jamaica Plain-bound. Okay, veer to the left up there. Take this roundabout and complete the circle about 315 degrees. If you’re quick, just put your hazards on and illegally park.

Ugi’s Pizza sits on a corner that juts out in the way that many Boston corners do: awkwardly. While the faded yellow siding can’t seem to make up its mind on whether it wants to actually be faded yellow or literally any shade on the gray scale, the brown stucco on the backside leaves much to be desired. The overall neutrality of the building, however, provides a backdrop that allows the graffiti to bounce off the sides of the structure into passerby’s eyes.

I’m talking bubble-gum pink with cranberry complements, electric blue-green and Pikachu yellow, blood red and metallized gray. One of those Wal-Mart smiley faces for price reduction won’t break eye contact with you, and your eyes keep darting from it to the two yellow lightning bolts atop the horseshoe magnet, back and forth and back and forth. That red magnet won’t let you dart forever. It keeps pushing through this diagonal tension line and your eyes need a break.

You’re looking at one of 18 international murals commissioned by the resurfacing pop-star Justin Bieber. The mural’s Jamaica Plain home connects Boston to the other tagged metropolises around the globe, including London, Sydney, Paris, Berlin, and Toronto. Bieber has successfully built up anticipation for his fourth studio album Purpose by releasing a series of infectious singles, and more so, he has teased audiences, making them thirsty for more, and basically resuscitated his career. He’s back.

The mural, fizzing with the energy of the pink boldface letters on the wall, is Double Bubble in nature—bubbles in bubblegum pink. Popping against the blue-green background, the artists, Deme5 and Kem5, create continuity between the simmering circles of dark pink at the bottom, the palest at the top, and the subdued, cool disks in the background. Tension is created again by the diagonal dimensionality of the letters with the central gray that plays with the perception of space.

RELATED: What The Mural On Boston’s Tallest Building Means For The City

Burning into your retina, the eye candy presents the palpable energy surrounding Bieber’s imminent release and radio infiltration. All of the marketing surrounding his return has been distinctively intentional, filled with anticipation and building awe. Unannounced before each one dropped, Bieber has unleashed four singles from the album with wild success, showcasing a new Bieber with a range of sounds.

He has been periodically punching into international ears, consistently capitalizing on the hype from the last release to make the next surprise even bigger. His tactics have successfully created suspense for Friday the 13th, unrelated to any urban legends. On Nov. 13, Purpose drops. As one of the final preparations, Bieber commissioned these 18 international murals, stirring up frenzy with the full release of track titles for the album. The people are perched on their toes.

His decision to take his audible art and make it physical with these murals was a decision to stamp his brand across the globe. He took what most people will be hearing privately through headphones and put it in the public’s eyes. Bieber is making his reemergence known and using this art form as a forecasting statement for his impending global domination.

The fizzing of the painting, the electricity from the magnet, and the glaring of that smiley face say it all: something’s coming, and he knows it.

Bieber’s murals are intentional and international. They’re rebranding and recreating him. This is public art with a purpose.

Featured Image by Ramsey Khabbaz / For The Heights

justin bieber mural public art
Wahlburgers Gives Viewers Inside Look At What Boston Is All About
Zombies, A Roof, And An Ultimate Realization About City Life 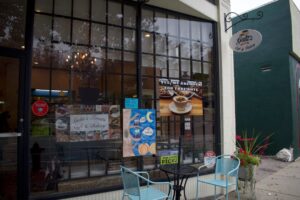