Home » BC Tops Providence On The Road For First Win 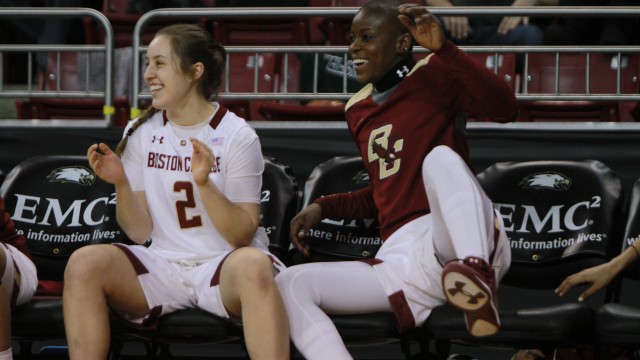 BC Tops Providence On The Road For First Win

Boston College took on Providence College on Friday for the women’s basketball season opener in Providence, R.I. After a disappointing and turbulent 2014-15 season for the Eagles, the team’s potential was shown with a strong victory against the Friars.

While BC came out slow, down 4-0 for the first four minutes of play with a number of turnovers and fouls, guard Kelly Hughes showed fans what this team can do by putting the Eagles on the board with a 3-pointer.

Still down 6-5 with 4:40 left in the first quarter, Hughes led the Eagles to 9-0 run with a decisive trey to finish the first quarter 18-16. The tide began to change for the Friars soon after—PC had multiple turnovers to end the first 10 minutes of play, resulting in BC scoring 10 points off of turnovers in the first frame alone.

Coming off last season as the only returning player who was punished, Boudreau saw one of her few good plays in the last seconds of the first period with a steal and jump shot.

This momentum for BC carried over into the second quarter, with eight straight points, six of them from redshirt freshman Kailey Edwards.

The Friars only points scored in the second period was a 3-pointer from Jaovana Nogic. This 14-3 lead for the Eagles in this period alone contributed to their intensity.

Entering into the second half, BC’s 32-19 lead quickly grew to 20 with a steal and two assists from Alexa Coulombe. Her two assists were to Quandt, who had two lay-ups, and she stole the ball to give Hughes another three-pointer.

This energy made for a strong fourth quarter for the Eagles with Hughes continually leading the team. She ultimately went 6-8 on three-pointers, contributing to her total of 22 points. After not scoring once in a preseason scrimmage game against Harvard University, Hughes has certainly redeemed herself. She is a force to watch out for as the Eagle’s season continues on Sunday against Maine.

The other leaders of the game were Mariella Fasoula and Edwards with 11 points apiece, Awobajo and Mosetti led the team in rebounds, each with a respective six.

Yet even with the Eagles affinity for 3-pointers, it outscored the Friars 36-14 in points in the paint.

This defensive showing from BC led to forced turnovers and rushed shots from PC with a final score of 67-41.

After continually struggling last year in the second half, the Eagles have shown that this is a new season.

This was a different team playing for BC head coach Erik Johnson than from what was seen at the end of last season. Not only was the team more defensive, but it also played in one cohesive unit. Everyone played a part in this victory, with a total of 19 assists, as well as a big showing from the underclassmen. While a young team might have held BC back last year, the group is shaping up this season.

A 26 point win was not something BC was familiar with last year, but if the Eagles can put up more performances like this by the time ACC play rolls around, it’ll pay huge dividends on their path to a postseason run.