BC Students To Educate On Domestic Human Trafficking With Panel

Walk down any busy street and you can easily brush past one of the estimated 20.9 million victims of human trafficking. To bring light to the issue of trafficking on a domestic level, the student organization Rallying Efforts Against Contemporary Trafficking (R.E.A.C.T.) will be hosting an event called Breaking the Chains: A Panel on Human Trafficking next Wednesday, Nov. 18 at 7 p.m. in McGuinn 121, featuring local speakers involved in the fight against human trafficking.

The U.S. Department of Homeland Security defines human trafficking as a “form of modern-day slavery, [involving] the use of force, fraud, or coercion to exploit human beings for some type of labor or commercial sex purpose.”

According to Kelly Sennott, president of R.E.A.C.T. and MCAS ‘16, common perception of human trafficking is heavily influenced by the media, with sensationalized stories of men, women, and children being smuggled away and sold into labor or prostitution becoming two-dimensional representations of a much more complex issue.
Traffickers in the U.S. rely more on emotional and financial manipulation than outright coercion to trick already marginalized communities suffering from political instability, economic hardship, or geographic displacement into forced labor.

This psychological dimension of human trafficking adds to the difficulty of recognizing it in the U.S. and providing care for survivors. As a result, many cases go unreported, with published statistics underestimating the true magnitude of the problem within the country.

Wednesday’s panel includes speakers from the Boston area involved in the fight against trafficking.
“We wanted to emphasize the fact that trafficking is not just an international issue, but also an issue right here in Boston, the place that we call home,” Sennott said.

“To have a survivor who was trafficked out of Chestnut Hill is incredibly powerful, and I think is really impactful for Boston College students,” Sennott said. “This is our home, where we feel most safe, yet there are people here who are subject to a terrible and atrocious institution.”

Health care professionals and shelters work with survivors on an individual basis to help them readjust to society, while lobbyists and entire governments are advocating for policy changes to address the issue on a national scale.

Members of R.E.A.C.T. hope that the panel’s message of hope will teach students to overcome the stigma surrounding trafficking survivors, recognize the signs of trafficking in their own communities, and inspire them to contribute to the cause with their own skills and abilities with the knowledge that victims of human trafficking can be saved. 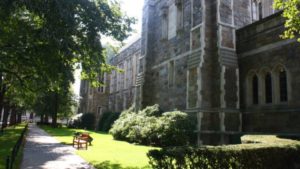