Home » Kim Kardashian And The Art Of Being Famous 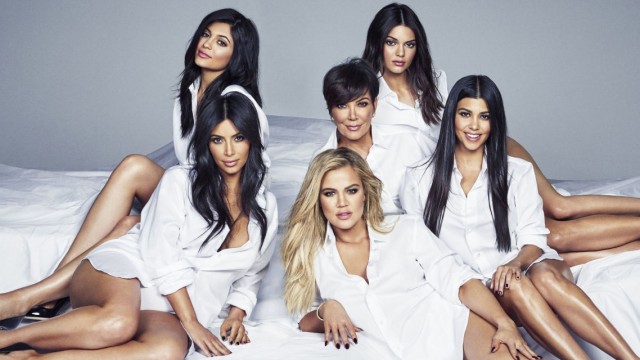 Kim Kardashian And The Art Of Being Famous

When Kim Kardashian West steps outside onto the rain-splattered pavement in front of the unassuming Greenwich Village apartment she shares with her husband, Kanye West, she has a few seconds before the paparazzi cameras begin to flash in her face. Kardashian is dressed for a funeral procession, clad in a crisp black overcoat, her hair pulled back into a sleek bun. She slinks unabashedly past the paparazzi, her gaze tilted downward and her hands shoved into her pockets, before disappearing into a limo. The photograph of the couple quietly exiting their New York City apartment is splashed across the front page of TMZ the next morning.

Kim Kardashian is inarguably one of the most famous women in the world. She salvaged her then-budding career from the fallout of a highly-publicized leaked sex tape scandal in 2007 that couched her reputation in controversy. When the dust finally settled, Kardashian emerged with an empire and one of the most successful reality shows to ever air on television.

Kim and her sisters Khloe and Kourtney made a name for themselves by allowing their lives to be filmed and broadcast on primetime television, the fly on the wall of one of America’s most infamous celebrity families. Keeping Up with the Kardashians spawned spin-offs Kourtney and Kim Take Miami, Kourtney and Kim Take New York, and Khloe and Lamar. Kim became a public relations powerhouse equalled only by her manager and matriarch Kris Jenner. She has amassed a fortune of over $58 million, launching her own successful video game, and portfolio selfie book. Together, the extended Kardashian-Jenner clan are worth $300 million and have over 179.2 million followers on Instagram (more than the populations of France and the U.K. combined.)

“It’s always funny to me when people say that I’m famous for being famous,” Kardashian said in an interview with V Magazine. “I think it’s fascinating, because it’s still entertainment, you know? It’s fun to see the progression of that idea. I don’t take offense to it all. I’m not naive to the fact that I’m not a singer or an actress or anything like that. I never claimed to be anything that I’m not. I think reality is still a new form of entertainment that was kind of an unexpected thing.”

As far as reality television dynasties go, the Kardashian-Jenner family is unparalleled in terms of fame. In recent years, their social media presence has superseded pure talent alone, and has opened the door to more traditional and well-respected channels in the entertainment industry. Caitlyn Jenner came out as transgender on the cover of Vanity Fair and was the recipient of the Arthur Ashe Courage Award and Glamour’s Woman of the Year award. Kendall Jenner has led modeling campaigns for Lancome, walked runway shows for Karl Lagerfeld, and was hand-plucked for a coveted spot in this year’s Victoria’s Secret Fashion Show. Her sister Kylie has served as the subject of media speculation ever since the 18-year-old began experimenting with body modification surgeries last year, and has used her fame to launch her own website, smartphone app, and anti-bullying campaign.

“When I followed Refinery29, I expected news stories about beauty and fashion, not an article every day about the Kardashians,” one user on a Refinery29 article said about Khloe Kardashian and Lamar Odom on Facebook.

A portion of Kardashian’s appeal is built upon the need to appear seemingly unaware of her own social clout. When Kim appeared mostly nude on the cover of the November 2014  “Break the Internet” issue of Paper Magazine, the website received over 34 million unique page views.

The majority of the criticism of the Kardashians falls onto Kim’s 2007 sex tape scandal, the family’s ostentatious display of wealth, and the vacuousness of their reality television show. That criticism isn’t entirely baseless—Kim’s antics, such as complaining about losing her diamond earring in the ocean or planning out a $10 million wedding to ex-husband Kris Humphries, doesn’t do much to defend her against critics that write her off as a vapid fame-hungry TV star. The public’s main gripe with the Kardashians comes from the fact that while they lack distinct “talents” to warrant their status, the family receives constant media attention and garners immense wealth. Yet, Kim has managed to drum up publicity by utilizing her family’s social media presence to launch scores of perfume and makeup collections and her video game Kim Kardashian: Hollywood, which has gone on to earn over $43.4 million and 22 million users. The Kardashians have managed to retain their fame through a series of highly calculated PR and social media moves that control their own image.

“Social media allowed my career to sustain, and I’ve adapted to the change of it all,” Kardashian said at the Code Mobile conference last year.

The question of how celebrities achieve fame by doing “nothing” is not a new one—socialites Paris Hilton and Nicole Richie bolstered their careers with their reality show the Simple Life in 2003. A better question to consider is whether or not reality television is truly considered “nothing.” Kim knows what she’s doing. You don’t get to 36.2 followers on Twitter and 51.2 million followers on Instagram without making a few enemies.