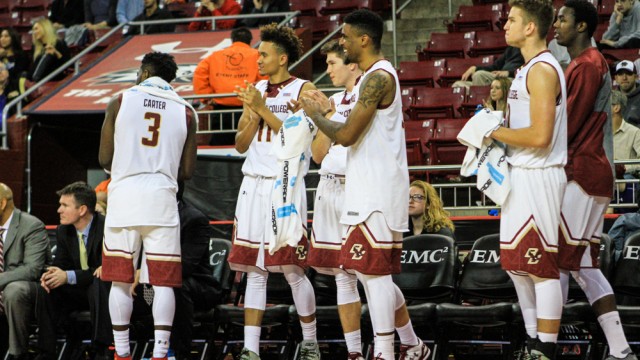 Graves, a 6-foot guard from Greensboro, N.C., has played at three different high schools over his basketball career. Most recently, he led Montverde (Fla.) Academy to a national championship last season, and will play for High Point (N.C.) Christian Academy this year. Graves reportedly chose to attend BC over Virginia, Notre Dame, Virginia Tech, and Harvard. “He is unbelievable with the ball in his hands and can play either guard slot,” BC head coach Jim Christian said in an email. “His ability to take and make difficult shots will separate him from other guards in this class.”

Popovic, a 6-foot-10 forward from Banja Luka, Bosnia and Herzegovina, represents another move in the Eagles’ drive to recruit overseas talent. He played for the U18 Serbian National Team last season at the the 2015 European Championship, and will join The Sagemont School in Weston, Fla. for his senior year. Popovic also received offers from Georgia, Notre Dame, Providence, Vanderbilt, and Richmond, according to BC Athletics. “He has a unique skill set where he has the ability to shoot the three, beat you off the dribble, and score in the low post,” Christian said. “We’re counting on him to get here and bolster our front court immediately.”

Sagay, the 14th-best prospect in New England according to New England Scouting Report, is a 6-foot-7 forward from Bloomfield, Conn.’s St. Thomas More School. An All-NEPSAC Second Team at Hartford, Conn.’s Watkinson School, Sagay chose BC over Villanova, Louisiana State, and Seton Hall. “Mike was an under the radar recruit in New England,” Christian said. “He is a converted football quarterback that just recently got serious about basketball. His skills make him a perfect fit for that combo forward position.”