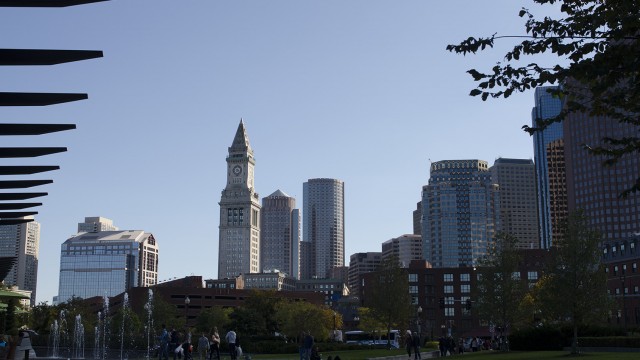 An entire year of writing about the city of Boston and cities as a larger concept has led me to the conclusion that I don’t want to live in the city.

That was how I ended my penultimate column. Not much has changed this past week. I heard the collective gasp from my multitudes of devoted readers. There was much moaning, wailing, and garment-tearing as they realized that I had forsaken my facade of city-loving cheerfulness. But if there’s one thing I always do in these columns, it’s tell the total and completely unadulterated truth, which is that I don’t like cities very much and I don’t want to spend an extended period of time living in one.

After reaching my ear-poppingly unprecedented conclusion, I spent this past week thinking about how one goes about writing a final column. Without an exceptional amount of material I decided I should attend a goodbye dinner thrown by some of my more devoted fans and protégées.

Sitting in the Boston restaurant banquet hall, staring with intense hatred at a wall painting of a beach, I was approached by an ardent fan who asked me to involve myself with the inanity of the party.

“Well, golly gee willickers” I said, plastering a gigantic and terrifying smile across my face. “I guess I can say a word or four.”

I walked to the front of the restaurant, stepped onto a small podium, and looked out at the people who were all expecting me to say something original, inspiring, and insightful. I took a deep and slow breath through my nose, causing a high-pitched whistling sound to echo across the room.

The room was dead silent.

“A city you love!” someone in the back prompted.

Catcalls and angry shouts came from the crowd.

Filled with the fury of 1,000 Chihuahuas, I began grabbing glasses and bottles from every table and throwing them against the wall. Glass shattered and people screamed. I leapt around like a creepy little leprechaun, hurling various shatterable things against hard surfaces until I grew exhausted and was faced with a room full of wide-eyed and painfully disillusioned fans.

With a huge heaving breath, I exited out of the back door of the restaurant into a dank, smelly alley where I sat down on an overturned milk carton and rested my chin in my hand.

Over the past year I’ve written 17 columns, including this one. Have I changed lives? Have I made the world a better place? Have I single-handedly saved the print journalism industry? Have I established a place for myself in the hallowed halls of Boston lore? Yes. Yes, I have done all of those things and more.

But I refuse to say, even one more time, that you should appreciate the city. This is because, it seems to me, that after saying it so many times it has had the exact opposite effect on me. Perhaps prolonged exposure always breeds contempt. I can’t pretend to be very enthusiastic about city-life anymore.

As someone under the age of 30, it sometimes seems like I’m required to crave the cultural adrenaline rush of a city, to bask in the mass exposure to humanity while relentlessly pursuing success like a wolfhound to a bloody steak.

This past year of semi-full immersion into city life and fast-paced pursuit of stimulation has made me realize that this lifestyle is stupid and I don’t like it. The city-life is like having your eardrums rubbed down with sandpaper while someone pokes you repeatedly in the eye. In the end it’s a painful, ultimately pointless emptiness.

Now that I understand this, chances are looking higher and higher that I’m going to end up working in a taxidermy shop in the deep recesses of northern Wisconsin. But then, I’ll still be writing down my thoughts and observations, even if it’s just in a small fur-covered journal.

These columns have helped me make it through these past semesters relatively unscathed.

If you’ve been reading these long-winded manifestos of nothingness, I’d like to say thank you. You’re one step closer to being a good person. I don’t have any final-column-look-at-how-much-I’ve-grown-condescending-advice for younger students. I’m not going to restate a painfully obvious life lesson that’s been said millions of times by better people than me. To end the year, all I can do is write about the city, about spending time by yourself, and about very, very bizarre idiocy.

These thoughts and more were running through my head as I sat outside the restaurant in the freezing cold November air of the dark night. It was the end of an era: The Year When I Was a Metro Columnist.

Looking up I saw a ghostly figure standing at the opposite end of the alley. I recognized the silhouette immediately and a small, genuine smile broke out across my face. Raising my hand, I waved once to the man at the end of the alley.

He nodded once, firmly, and then saluted.

“You’re a useless idiot, Henry,” he said, gently, before disappearing.

And then I was alone again.