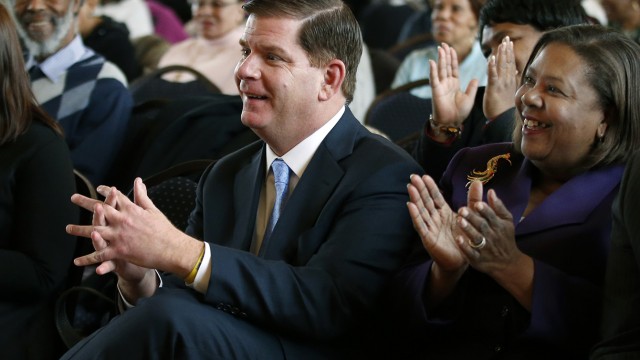 The City of Boston has not initiated a comprehensive city-wide master plan in half a century, but now Mayor Martin J. Walsh, WCAS ’09, is looking to the residents of Boston to decide what the city should look like by 2030.

In the 50 years since the General Plan of 1965 was conceived, Boston has exceeded its expectations in terms of industrial and population growth.

In order to effectively harness the incredible powerhouse Boston has become, however, Imagine Boston 2030 executive director Sara Myerson explained that the city’s resources must be preserved wisely, and enhanced equitably.

As a former Goldman Sachs analyst with a masters degree from Harvard in urban planning, Myerson commands the initiative for Imagine Boston 2030 with an articulate, clear vision that resonates in both her voice, and also within the distinct structure in which the initiative is rooted.

When Boston placed its bid for the 2024 Olympics, Myerson worked as the Mayor’s point person through the effort. After the bid collapsed, Myerson’s passion for the city shifted toward a more immediate goal, and translated into leading Imagine Boston 2030.

“Imagine Boston is designed to engage the entire city, and all those who live, work, and play within Boston in a conversation about what we envision for the future, and ultimately establishing a shared vision for the future of the city,” Myerson said. “We are creating a framework to guide our policies going forward to achieve that goal and vision.”

Unlike previous city initiatives, Imagine Boston 2030 approaches issues on a community and interdepartamental level that truly allows all individuals take action and voice their opinions in themes that range from housing and public health to job opportunities and access to education.

“We are looking to involve the city in ways we’ve never involved it before,” Myerson said. “And we are trying to have conversations which extend beyond just the conversation many of us are used to by making sure we are going to where the people are.”

In order to do so, Imagine Boston 2030 functions across platforms that are both accessible and innovative.

Utilizing digital tools such as social media and texting, as well as street publicity and face-to-face conversations, Myerson hopes to access the entire city in a way that will inspire neighborhoods to promote sustainable growth. Individuals may submit their recommendations with a few taps in the comfort of their own homes; suggestion boxes will be located in well trafficked areas, such as public libraries and local businesses; staff members will be present at pre-existing meetings that are occurring.

“We don’t want to just grow in general—we want to grow responsibly,” she said.

Taking on a project of such scale and extent, however, is accompanied by obvious challenges.

Myerson hopes to see a push toward connecting the problems of each individual citizen, to the city as a whole.

“We are really trying to learn and understand how people engage with their own neighborhoods or the areas they experience most on a daily basis,” Myerson said. “In doing so, we are able to access ways to encourage people to collaborate on a city-wide scale. Moving beyond our own spheres, and into the context of the entire city, has definitely been a challenge.”

Myerson remains inspired and hopeful for the trajectory of the project as it continues to take root.

With the vision, principles, and goals already underway for spring of 2016, the draft development of the plan is expected to be presented by the winter of 2017.

As this initiative continues forward, however, Myerson stresses the importance of gaining feedback from the public in order to create the largest impact.

“What is most important now is to join the conversation,” Myerson said. “We are not creating a singular, physical vision for the city, but rather, we are looking at all visions and collaborating with people and between departments to make our united goal a reality.”

walsh boston 2030
Just A Sliver Of The Prudential: Knowing And Unknowing Boston
A Cappella, JUICE, and Hunger Games This Weekend In Arts