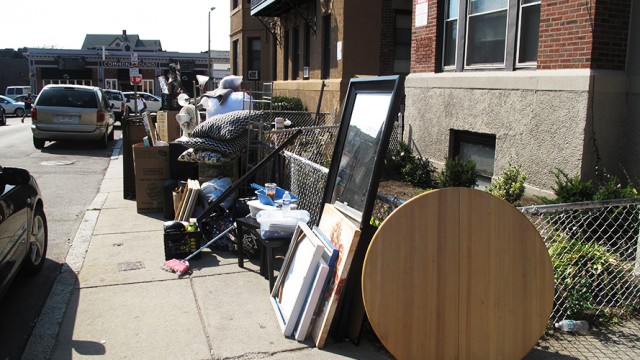 Moving is a stressful process, and packing up all your belongings takes up significant time and causes a disruption of our natural routine. For college students, this often occurs at the beginning and end of the school year. Harvard startup QuikForce leverages technology to streamline the moving process and make your move less stressful.

“When you have to move, it’s a huge pain—you have to call moving companies and schedule a move,” he said. Lim’s inspiration for the startup came from his father, who had his own moving company in his native Singapore. Lim, before arriving to the United States for college, helped his father during his spare time.

QuikForce’s website features a booking system in which customers can select how many and which types of items they wish to move. Customers can select if they have any fragile items, as well as the amount of stairs movers will need to travel. This is used to calculate the approximate length the move will take. Next, users will select their first and second preference of moving days, as well as their contact information. The total cost and time for the move is then calculated.

“We have a fixed hourly rate of $120 per hour and collect a fee for every move booked through us,” Lim said.

Currently, QuikForce accepts cash payments and payments digitally via Stripe. Lim believes, however, that he will add additional electronic payment methods in the future. “We hope to create a mobile app for our platform to include payments and a timer for the customer’s move,” he said. QuikForce ensures that customers are guaranteed that a professional moving company will be handing their move.

QuikForce also has a SaaS (Software as a Service) product in which moving companies can book, schedule, and plan their moves which will allow these firms to be more productive and more efficient with their time. Lim and his team created a dynamic algorithm after it analyzed thousands of moves in the Boston area so that it can match customers with the correct moving firm for each client’s situation. With over 50 million Americans moving each year, Lim believes he can disrupt the $20 billion moving industry. Lim’s company has already partnered with over 50 local moving companies onto the platform. QuikForce’s team is made up of students from Harvard, MIT, Princeton, Penn, Boston University, and Northeastern.

Lim praised the Harvard Innovation Lab for the support it provided QuikForce and its team. “We had the opportunity to meet with other startups, meet with mentors, and learn from others who have been through the process,” he said.

QuikForce is currently available to use in Boston and Miami, and the company is planning to expand to Dallas this summer, according to Lim. Looking to the future, Lim believes his platform could add new services as the company grows. But right now, Lim believes the simplicity of the QuikForce platform has led to higher customer appreciation.

“We have closed over 100 moves and have received great feedback from our clients—it takes as little as a few clicks to book a move,” Lim said. He emphasized how important his team has been in establishing QuikForce. “One of the things I focused on since the beginning, was finding the right team—the right people with a unique skillset and culture fit was important to me.”