Point / Counterpoint: Should Parking Apps Be Allowed In Boston?

t’s not easy to find a parking spot in many major American cities—especially Boston. Many Bostonians will drive around endlessly trying to find parking spots on the street. If you’re making your way into the city for a Red Sox game or the Boston Marathon, you know that it is nearly impossible to find a place to legally park your car for a few hours. In the past few years, a handful of apps have emerged to help with this problem. Haystack was the most notable app that emerged in Boston, but even it failed to gain traction, and was eventually banned due to legal complications. Many cities are currently debating whether to permit these types of apps, acknowledging the possible benefits to consumers as well as any ethical consequences. We, at The Heights asked: Should these parking apps be allowed in Boston?

Parking in urban areas has long been a stressful and inefficient process. I remember being about 8 years old and going with my mother into Manhattan for work. Parking is always contentious, but luckily my mom found someone who was about to pull out of her spot, so she pulled up behind her to wait and not block traffic. The other car left, and my mom begun to pull into the spot when a large SUV pulled up next to us. The man inside rolled down the window and started yelling at my mother, saying he was going to take the spot and she had to move. My mother, steely-eyed, looked at him and asked how he would feel if someone did this to his mother or sister and laid the guilt on so hard that I could feel it second-handedly from the back seat. Needless to say, he drove away.

The truth is that parking in urban areas is not an effective system. One way to look at the issue is through the lens of opportunity cost. A study was conducted in a 15-block area on Manhattan by a public group, Transportation Alternatives, which found that drivers in this area drove 366,000 miles a year just looking for parking. They also found that 28-45 percent of traffic in some areas is created by people searching for parking. Assuming that people circling were driving 20 miles per hour on average, that’s 18,300 hours spent simply searching for parking.

This is evidence of something beyond a daily inconvenience—this is an efficiency drain. Time that could be spent on economic productivity is spent circling for spots in a vehicle that actively harms the environment while wasting fuel that costs money and resources. There is simply no upside.

Industry has attempted to capitalize on this system for decades. Private parking garages and lots that charge fees are one option to generate revenues. Take parking garages and lots in Boston—parking for just an hour can cost upward of $20. This is an industry taking advantage of the scarcity of parking in urban areas. Garage companies use private property to offer this service. A newer parking facilitation concept that has been on the rise with the popularity of mobile devices are parking apps—programs that allow drivers to seek out available spots based on data inputted by a network of users and developers.

One thing we must consider here is creative destruction. This is the idea that when there is opportunity to restructure a system that would create a more efficient operation, it should be done at the expense of the old way. We saw it with Netflix replacing Blockbuster. We are seeing it with Uber fighting the taxi industry. It is happening all the time, and it is vital to understand that this is how progress is made. Reviews for the apps have not been great, but most users attribute their negative experiences to a lack of people who use these apps.

As the popularity of these applications grows, so will their utility. More people who understand the way they work will increase the client base. One thing to think about is the standardization of systems with this premise. Perhaps instead of there being a fee for the spots, the apps could be supported by advertising revenue and government commissions, allowing companies to develop these systems within legal parameters.

It is a fine line. There certainly needs to be a reform on the current public parking system. But if implemented correctly, there could be incredible change in quality of life for car owners in cities and commuters.

Madeleine D’Angelo | For The Heights

When I was little, my mom told me I had to share my Barbies with my younger brothers. After much confusion and pain, I finally mastered the technique, “sharing” not only the Barbies but also the Ken dolls. Just when I thought I had mastered this whole sharing thing, I started realizing that I had to share everything—even my food. It took a while, but I eventually became a competent sharer, and today I am proud to say that I can even share the ice cream that I get all too regularly, with only mild internal pain.

Over the past few years, developments in the hectic world of parking in downtown Boston have revealed that—much like me during younger years—many others struggle with the complex concept of sharing. But sharing ice cream and sharing public spaces are two very different issues, especially when you live in a city like Boston.

In July 2014, Haystack, an app developed by Baltimore-based entrepreneurs, launched in Boston. In theory, Haystack promised to revolutionize city parking by providing parked cars with a way to alert other drivers when they were about to vacate their spot. These drivers, who could be desperately hunting for a spot in packed areas like the North End or Cambridge, could then bid on the advertised parking spot, and part of the resulting profit would go to Haystack, while the rest would go to the car already parked in the spot.

Although this may appear to be an objectively good idea on a day when you need a parking spot in the trendy areas of Boston more than anything else in the world, it actually warps the concept of public property. Parking spots, elusive as they may be, belong to the public. They are equal opportunity, and their usage should be based on whoever is determined and lucky enough to find them, not based upon whoever can pay the most in a bidding war. If apps like Haystack are permitted to thrive, scouring the city streets in the early hours and snatching up coveted spots could become its own business, allowing people to make their living off public spaces that are maintained by taxpayers’ dollars.

As Curt Woodward points out for BetaBoston, “It’s a bit of social etiquette that a kindergartner would recognize as true: When you’re sharing something with the group, it’s not right to just grab ahold of that thing and start acting like it’s yours.”

Just a month later, in August 2014, The Boston Globe revealed that the City of Boston voted to “prohibit the sale, lease, or reservation of public ways in the city, an ordinance that effectively bans the mobile parking app Haystack from operating in the city. In response, Haystack said it would suspend operations in Boston until further notice while continuing to work with the city to find an acceptable solution to Boston’s parking woes.”

Even though the City of Boston made its position on operations like Haystack abundantly clear, it has still endeavored to ease Boston’s parking nightmare over the past few months by mimicking the successful dynamic parking approach taken by San Francisco in 2011.

According to a recent Globe article, “Under a proposal announced Thursday by Mayor Martin J. Walsh, [WCAS ’09] the city would boost the price of select parking meters at peak times near Fenway Park and other commercial districts, hoping to free up spaces and ease congestion.”

Though this approach would certainly raise the cost of parking in some areas of Boston, it would hopefully decrease the congestion in city streets by encouraging people to park in other areas of the city, or even take public transportation.

Walsh has not yet announced when these changes might occur, and perhaps Bostonians will change their transportation habits in the meantime. Who knows, maybe a few trips on the T will remind people about the importance of sharing public space.

apps parking
A Cappella, JUICE, and Hunger Games This Weekend In Arts
‘What Are Your Thoughts On David Ortiz’s Impending Retirement?’ 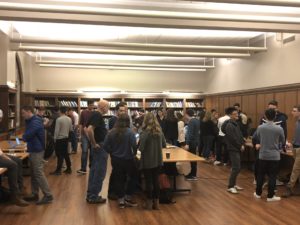