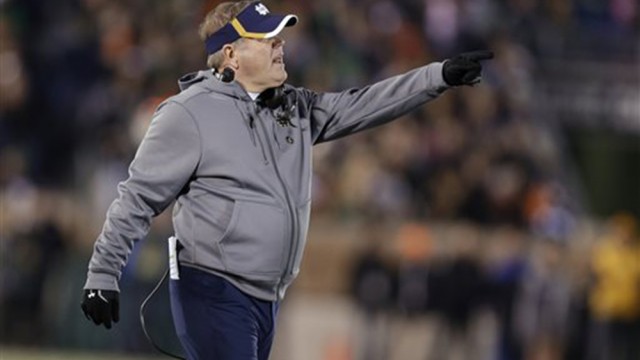 It has been an incredibly trying season for all involved with Boston College football.

Trust me, no one knows that more than me.

Regardless of the cliches that Steve Addazio has impressed upon you in his weekly Monday afternoon press conferences, this season has been an abject failure, even for a rebuilding year. And don’t put yourself in the spin zone by recalling the mighty BC defense, and how it has stifled its opponents, holding them to the least yards and the third-least points in the country—whatever gets you through the night. It won’t work.

No, it’s the offense that was supposed to develop. And that has not happened, no matter how you trick yourself.

Darius Wade, the guy who was supposed to be BC’s next starting quarterback, has hung out on the bench since Nile Lawrence-Stemple ate his ankle in the season’s third week. Addazio often claims the Eagles now have four trained quarterbacks who have seen time against ACC teams. That’s not really the case. Instead, BC has four players, each of whom have either been shuffled around (Jeff Smith and Troy Flutie), used incorrectly based on helping them grow as quarterbacks (Smith and Wade), or gotten incredibly lucky and made the most of garbage time (John Fadule). Together, given their current experience, they make for one good serviceable quarterback. But unless they morph into one Mega Dude, BC will likely have the same growth issues it had this year behind center.

Since no true quarterback has emerged, it has hindered the development of the wide receivers, a group that already has enough trouble in the Addazio offense. The young wideouts, such as Elijah Robinson, Thadd Smith, Drew Barksdale, and Charlie Callinan, haven’t had the opportunity to evolve because of Addazio’s stubborn insistence on a run-first-and-probably-run-only offense. And yes, despite Addazio’s promise for a more balanced attack this year, that’s how this season has turned out. The Eagles have attempted a mere 213 passes this year, 10th-fewest in the country, compared to 427 rushing attempts, the 37th-most in the country.

Think twice about saying that’s the better option for the Eagles: BC only averages 153.2 yards on the ground, 91st in the nation. Every team lower than them in that category has fewer rushes. So the running game that Addazio touts as so dominant is not that efficient, making it all the more absurd that he’s not giving more of an opportunity, not only to his quarterbacks, but to his wide receivers.

Granted, that’s because his running backs have faced their own injuries, too. Their top two choices—Jonathan Hilliman (foot) and Myles Willis (shoulder)—have been sidelined for a good chunk of BC’s minutes. In addition, they’ve played behind a patchwork and youthful offensive line that has been thrust into a starting role before it was ready. And while it has been excellent practice for the line to center up against stout ACC defenses, they’ve looked wholly unprepared to work up to the task.

So yeah, it’s been a frustrating year for the Eagles.

But fear not. All of those bad vibes could disappear as soon as this Saturday evening.

All it will take is a win against the University of Notre Dame, the No. 4 team in the nation and (from the BC perspective, at least) the school’s biggest athletic rival.

Yup, that’ll just about do it.

Let’s look at it first from the football perspective.

Offensively, a good performance against a solid Fighting Irish defense could separate some players in a quest to find who will earn starting time next season.

One of the most important places that may be is on the offensive line. Some of Addazio’s top recruits from last season, including Anthony Palazzolo, were redshirted with the idea that they’d be ready to take over for BC’s two senior line members: Harris Williams and Dave Bowen. Yet with Aaron Monteiro, Chris Lindstrom, and James Hendren—all freshmen or redshirt freshmen—seeing considerable time, not to mention holdovers Jim Cashman, Jon Baker, and Frank Taylor sticking around, it may make Addazio’s difficult task at separating the good from the elite.

The same goes for those wideouts, who will face the 37th-best passing defense in the country in terms of yards per game. If one of those underclassmen can separate themselves—if Addazio allows Fadule to pass a reasonable amount of time, that is—then they could see the top of the depth chart entering next season.

As for this defense, a win against Notre Dame will prove this team hasn’t given up this coaching staff. Let’s face it: there’s no reason for this defense to keep putting in their stellar efforts each week except for pride and faith in the staff. So far, it has done a superb job keeping the energy up. Now wouldn’t be the time to pull back.

For this coaching staff, and for Addazio himself, it will, at least temporarily, dispel the notion that he can’t handle the big stage. In his head coaching career, the criticism has been fair. Between BC and Temple, his teams have defeated one ranked team—No. 9 Southern California last year, if you haven’t heard—in eight total tries. Addazio is also a mere 15-23 in-conference at his two schools—8-15 in the ACC while serving as BC’s coach alone. A well-coached win against arguably the toughest opponent he has had to face yet will quell the worry that he can’t live up to the moment.

From a non-team perspective, a win would (temporarily) distract from what has turned out to be a brutal year for the Eagles. BC has lost games in ways that haven’t seemed possible: Smith’s phantom touchdown against Duke, throwing away fumbles against Louisville and Florida State, the Wake Forest game that I’m still trying to process.

While it’s still troublesome that the team hasn’t won a game in the ACC, beating Notre Dame could provide some hope for next season. It proves the Eagles, a team that will largely be intact next season, have a shot against upper-level competition. And it’ll crush Notre Dame’s playoff chances, too.

I’m not promising an upset, nor am I expecting one. I’m just saying, in the event that something amazing like that can happen, give the guys in maroon and gold a break. After all, they just beat Notre Dame. That has to count for something hopeful for this program.