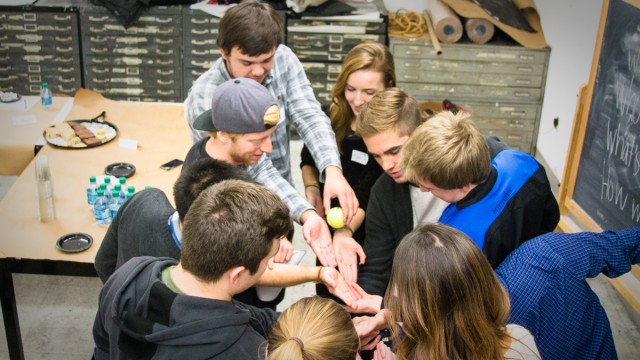 The Next Wave Of Disruption In Business Education At Boston College

With social impact at the core, new interdisciplinary programs are breaking down the silos of traditional business disciplines.

ass. Pass. Pass. Repeat. The goal of the game is for everyone to touch the tennis ball, and with each iteration, shave a little time off the clock. The 10 strangers communicate with stiff body language, exchanging short glances at each other’s name tags as they argue logistics.

“Meet @ Shea” is one of the first student-driven initiatives to come out of Boston College’s nascent Edmund H. Shea Jr. Shea Center for Entrepreneurship—and the goal of the game is for everyone to touch the tennis ball. The program is a social solutions network for undergraduates, built as much around principles for social work like “Root Cause” as traditional concepts in management.

This particular group contains students with backgrounds in economics, computer science, management, communication, and political science. (And this list of majors also comes with the assurance that another student from Lynch couldn’t make it Tuesday night.)

Within the interdisciplinary group, there remain clear imbalances: a majority of participants are male, and a majority come from the Carroll School—a trend that is pervasive, many students involved in entrepreneurship groups at BC say. But if the evening’s focus was indicative of the direction the culture is headed, this could soon change.

“We have a lot to learn from outside our traditional business disciplines.”

nformation systems professor Mary Cronin is one of several faculty members pushing BC’s outlook on management beyond the conventional silos of business teaching. She has championed a new co-concentration on “Managing for Social Impact,” and if all goes as planned, this offering will run parallel to an interdisciplinary minor for students in the Morrissey College of Arts & Sciences. She has also been one of the early proponents of Meet @ Shea.

“We have a lot to learn from outside our traditional business disciplines,” Cronin said. She predicts deeper skills like “design-thinking” will increasingly be demanded of managers. With that in mind, she plans for the Managing for Social Impact co-concentration and minor to be a collaborative effort between the Carroll School and departments in the Morrissey College like sociology, economics, theology, philosophy, environmental studies, earth and environmental sciences, and political science.

On Monday, Cronin helped to bring a panel of social entrepreneurs to campus, including Anna Trieschmann, program manager at the Social Innovation Forum and BC ’12. The enterprises featured are tackling what Cronin categorizes as some of the biggest topics facing today’s managers: social justice, sustainability, and inequality. “There’s no getting away from it,” she said. “Those are the issues.”

During the Dot-Com Boom of the late ’90s, Cronin introduced a course in E-Commerce to BC. With a smile, she’ll recall how many of her colleagues, at the time, viewed Internet business as a fad.

For the champions of social entrepreneurship at BC, this isn’t going away either.

“There’s a stigma that entrepreneurship is supposed to be a CSOM thing.”

eaving Dschang, Cameroon, meant leaving family. It meant adequate treatment for his mother, who suffered a stroke. And ostensibly, it meant a different life for Loic Assobmo, founder of the Global Enterprise for Medical Advancement (GEMA) and BC ’15. Assobmo knew entrepreneurship mattered, and coming to BC as a biology major, he knew that he wanted to do something for health care in Africa.

He just didn’t know what or how.

Assobmo, who went on to win the BC Venture Competition Seed in April 2014, found a scarcity of resources for upstarts in the Morrissey College. He felt his classes didn’t provide the background he needed to put his learning to practice, and the prevailing view among his peers was that business-oriented clubs were more internal offerings for Carroll School students. “There’s a stigma that entrepreneurship is supposed to be a CSOM thing,” he said.

He credits the success of his company—which focuses on mobile technology for health care in Africa—to his experience with TechTrek Ghana, a course offered through the Carroll School and led by professors John Gallaugher and Betty Bagnani.

“I can’t even put into words how profound that experience was to me, but literally TechTrek Ghana was the most valuable experience I had at BC,” he said.

The course inspired Assobmo to join the BCVC Seed competition, through which he won the initial funding he needed for GEMA. From there, he said Gallaugher, Bagnani, and Professor Laura Foote—who leads BCVC Seed and also teaches a course on social entrepreneurship—were instrumental in helping to get his concept off the ground. He also was supported by the Soaring Startup Circle for BC alum, which was founded by Tom Coburn, CEO of marketing startup Jebbit.

Assobmo still sees room for BC to grow in terms of social entrepreneurship and, more broadly, innovation. Schools likeMassachusetts Institute of Technology, he notes, have conferences for entrepreneurship, and looking to the future, Assobmo said he hopes BC could host something similar.

He also sees a gender divide when it comes to interest in startups, and believes this is partially due to a disproportionate number of male faculty teaching in entrepreneurial fields and serving as role models for students interested in founding businesses.

“I have done a lot of investigation of what other universities are doing in this field, and there’s a ton more BC could do.”

C was awarded the Ashoka Changemaker award in 2013 for its progress in social innovation and entrepreneurship. In the time since, the Carroll School has launched the Shea Center for Entrepreneurship and also founded a co-concentration in entrepreneurship.

Foote, who in her research looks at the offerings in social entrepreneurship at other universities, considers the offerings at BC to be in an earlier stage of development.

Foote argues that, when it comes to social enterprise, you have to be prepared to do spreadsheets—to look at how many people you can help, possible revenue streams, and how that compares with costs.

In the context of other Ashoka Changemaker campuses, Foote’s research found that BC is lagging in that it doesn’t have a dedicated clearinghouse or point person for social enterprise projects yet. It also does not offer the interdisciplinary majors in social entrepreneurship you could find at universities like Northeastern.

“I have done a lot of investigation of what other universities are doing in this field, and there’s a ton more BC could do,” she said. “We’re starting.”

“I think that I fought my way into it.”

arissa Venuto, vice president for social entrepreneurship club Enactus and MCAS ’17, wanted to make coffee cups out of coffee grounds. With Foote’s guidance, she met up with students from the Olin College of Engineering in Needham, and through Enactus, prepared to change the world of coffee waste.

“It ended up not working out—the FDA and everything,” Venuto said. “But then we went and presented this project in front of a bunch of entrepreneurs and business owners.”

Venuto stayed with the organization, and is now helping shaping its presence at BC. She said that when she first joined, it was mostly students from the Carroll School. That demographic has shifted slightly, but she still finds recruiting to be hard, and believes opportunities like Enactus can be daunting for students in the Morrissey College.

“I think that I fought my way into it,” she said. “I was really persistent about it, because I know it was what I wanted to do.”

Venuto, who is a communication major, joined Meet @ Shea for its inaugural session. She said she was excited to see this kind of meeting at BC—and hadn’t given up on the coffee grounds yet.

“It’s always in the back of my head,” she said. “And I know now I have some contact who would be willing to work with me, but I don’t have the time or expense to do it by myself.”

At the meeting’s end, the group revisited the tennis ball exercise. They discovered the closer they got, the quicker it went. Their first time was 11 seconds, and their last 0.65.

An earlier version of this article misidentified Marissa Venuto as Maria Venuto. This error has been corrected.

CSOM
Lines & Bodies: A Sketch Of An Artist, A Conversation With Vinny Roca
LTE: Letter From Faculty And Staff Members Of Boston College