Home » Eagles Skate Past No. 5 Northeastern To Stay Undefeated 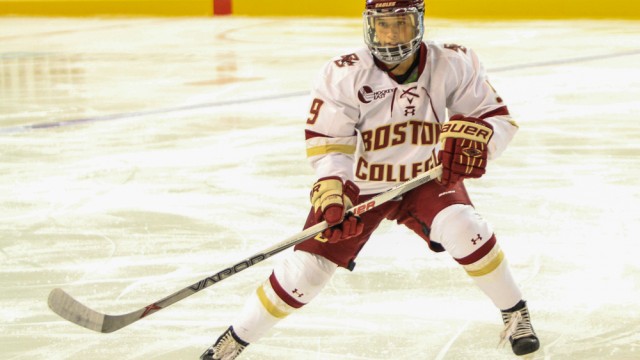 Eagles Skate Past No. 5 Northeastern To Stay Undefeated

With all the changes in the NHL and other sports leagues these days, it is clear that the emphasis is on one aspect and one aspect alone: offense. Rules have been changed to make defense more difficult, overtime has been switched to 3-on-3, and so on. The game between Boston College and Northeastern University looked to promise plenty of that offense: a clash of top-five teams, where each came in averaging well over five goals per game. But in the match between No. 2 and undefeated BC (14-0-0, 8-0-0 Hockey East) and No. 5 Northeastern (10-2-1, 6-1-0 WHEA), spectators instead got a competition between two stout defenses. Thanks to Brianna Bugalski in the net for the Huskies and Katie Burt in for the Eagles, combined with excellent defensive performances on both sides, the goals came in spurts as opposed to a torrent. In the end, Tori Sullivan scored two goals and BC did enough to win 4-2 over the Huskies.

An early checking call on Megan Keller gave Northeastern a power play, during which Kendall Coyne promptly turned a Denisa Krizova assist into a goal in the fourth minute. It was only the second goal the Eagles have given up in the first period all year. But, in what became a pattern for the game, the lead was short lived. Sullivan skated through the chaos and rifled the puck high inside the near post to level the score.

The fast start turned into a more patient game, with each side favoring possession over speed. Both teams were very selective in taking their shots, but when a player finally did pull the trigger, they rarely threatened. The best chance for either side during the remainder of the first period came with less than two minutes left in the first period, when Burt blocked a great shot but could not control it and a scrum in front of the net nearly let the puck in.

BC almost took the lead in the second with a flurry of chances in the opening minute. But after that, the Eagles could not capitalize on power plays and neither side could separate itself from the other. The defenses played superbly, blocking shots left and right. Burt only faced 23 shots all game against a team that has averaged more than 30 this season.

“With their top line, that we were able to hold Kendall [Coyne] to a just power play goal [is huge],” BC head coach Katie Crowley said. “[Kaliya Johnson] is so fast and was out there with their top line. Going down the wall a couple times Kendall had the puck and [Johnson] caught her. That’s just tremendous athletic ability.”

The beginning of the third saw more of the same. But then, after a relatively uneventful first half of the third period, the floodgates opened. Meghan Grieves set it all off with an absolute sniper shot past Bugalski in the 11th minute to put BC ahead 2-1.

The celebration, as before, was short lived, as once again the score was evened within a minute. Hayley Scamurra silenced the previously ecstatic Eagles’ bench with a goal only 27 seconds later to make it 2-2.

Momentum was even again, but Johnson put the Eagles ahead for good with her first goal of the year in the 12th minute. “She steps up in big games when we need her,” Crowley said.

This time, however, BC did not come out slow but played with intensity. BC withstood the Northeastern offense, and eventually a power play at the very end let the Eagles kill the two remaining minutes. After Bugalski was pulled with 20 seconds left, Sullivan slotted her second goal into the open net with one second to spare, securing the 4-2 win.

Despite it being so close, this was a statement game for the Eagles. They welcomed the No. 5 team in the country into Conte Forum for their largest test of the season and beat them, simple as that. It was not flashy hockey nor was it overly exciting hockey, but it was clean, well-executed hockey. And the truth is that this is what the Eagles need to do to be contending for a national championship come March.
“We’ll try to carry this into Wednesday [against Providence],” Crowley said, “and then push on the road to finish strong this semester.”