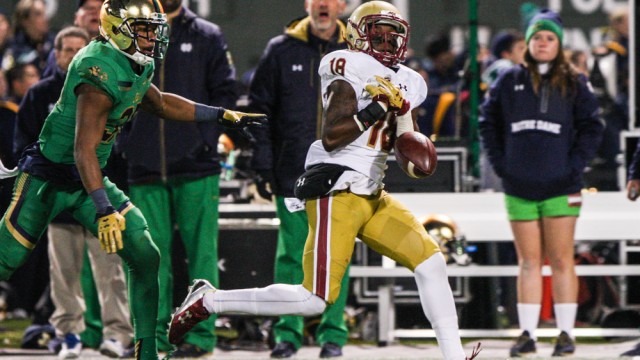 BOSTON—Anyone who has seen a minute of Boston College football this year probably knew the game would end up this way.

We saw it against Duke. It happened against Wake Forest. Even the Florida State game showed it.

Dominant defense, anemic offense, and a sprinkle of coaching and special teams miscues. And that painful feeling that the Eagles might have a chance at coming away with a win against a really good football team, but ultimately, cannot do enough to earn a happy postgame press conference.

On Saturday night, four miles from its home base, in front of a national audience at one of the world’s bastions of sport—Fenway Park, home of the Boston Red Sox—BC (3-8, 0-7 ACC) displayed that technique in the most egregious way it has shown all season.

With five turnovers—three of them coming inside the BC 5-yard-line, the defense gave this team every chance possible to win this game. But the Eagles couldn’t score on any of them, leading to a 19-16 loss in the Shamrock Series to the University of Notre Dame.

On their opening drive, the Fighting Irish (10-1) appeared to show a gritty mix of running by C.J. Prosise and short, over-the-middle passes from Deshone Kizer that had helped them pick apart defenses all season. But Kizer, in homage to ND’s turnover-prone starter, caught a brief bout of Everett Golson’s Disease, getting picked off by John Johnson in the right back corner of the far end zone.

Quarterback John Fadule, trotting out to lead the offense, made a couple of big plays, but a loss of yards from Tyler Rouse and a drop by David Dudeck killed the first drive. Turnover No. 1, for naught.

The Irish got on the board immediately after with a 30-yard field goal by Justin Yoon. But the Eagles got an opportunity again in the first quarter, when Justin Simmons chased down Prosise after a 19-yard run, stripping the ball and recovering the fumble.

The offense followed it up with a three-and-out. Turnover No. 2, irrelevant.

BC almost looked like it got a stop at the end of the first when Yoon’s 44-yard field goal attempt clanked off the right post. Again, a dash of special teams problems hurt the Eagles. An arguable roughing the kicker penalty on Johnson directly led to a 10-yard TD pass from Kizer to Amir Carlisle, and a 10-0 lead at the end of the quarter.

A disaster situation on special teams almost buried the Eagles in the second. Sherman Alston, BC’s beleaguered and ineffective return man, finally made a move that could’ve cost BC, fumbling a Tyler Newsome punt at BC’s 5-yard-line. But Matt Milano made a play that would make Luke Kuechly smile, ripping away the ball from Notre Dame backup running back Josh Adams.

BC head coach Steve Addazio changed his game plan, allowing Fadule to air it out downfield. After a 22-yard pass to tight end Tommy Sweeney, Fadule did just that—a perfect throw down the two teams’ sidelines to Thadd Smith that looked destined for six points. But, like in the Duke game, Smith couldn’t tuck the ball in. A surefire touchdown led to a missed opportunity. Turnover No. 3? Pointless.

But on the subsequent drive, Kizer just couldn’t prevent the mistakes. On a 3rd-and-10, Steven Daniels blitzed up the middle, forcing Kizer to loft it into no man’s land, perfect for Simmons to pick it off—his second turnover of the day.

That’s when the questionable coaching returned. With 1:08 remaining in the half, Addazio left his timeouts on the board and called for poor short pass plays, allowing the Fighting Irish to run out the clock after a punt. Turnover No. 4: inconsequential.

Michael Walker provided a spark to start the half, returning the ball on the opening kickoff 67 yards to set up a Colton Lichtenberg 43-yard field goal, and getting the Eagles on the board.

Kizer marched down the field right after, with effective and well-executed passes over the middle to Alize Jones, Will Fuller, and Carlisle. But Simmons intended to keep that momentum with the BC side. Truman Gutapfel tipped a Kizer pass aimed toward the end zone, which the senior safety snagged with one hand.

At that point, Addazio made the switch behind center to Jeff Smith. “We planned on doing that,” Addazio said of the move. In the immediate, it didn’t pay off. Smith stepped into the offense decently, operating with Richard Wilson to push to Notre Dame’s 40. But Smith fumbled on 3rd-and-11, falling on it for a sack, making Turnover No. 5—you guessed it—worthless. And with a quick touchdown right after to Chris Brown from Kizer, and a field goal to open the fourth quarter, Notre Dame appeared to “shake down the thunder from the sky” and finish off the Eagles for good.

But the toughness and grit of this football team—the positive signs from a youthful group playing difficult competition week-after-week, the dividends that Addazio has promised all year—finally seemed to appear in a small dose.

Smith broke away from the Irish front-seven, dashing 80 yards through the middle for a touchdown. A couple of drives later, Fadule and Smith combined for a 86-yard scoring drive that culminated in a touchdown over the middle to Charlie Callinan.

A game that the Eagles could’ve had ultimately came down to an onside kick, easily recovered by the Irish. Despite not taking the path many expected, the Shamrock Series had the same outcome: Notre Dame walking off victorious in BC’s city.

“I don’t like where we are in terms of our wins and our losses right now, but I like where the future is headed,” Addazio said. “It’s heartbreaking, it’s frustrating, but it’s exciting.”

BC may grow from these experiences when it goes up against these same opponents in the near future, and given how many underclassmen on offense have gotten valuable in-game action over this year, there’s a reasonable chance that it could happen. But this season, the Eagles have cooked up a recipe for failure, with a defense that never stops giving the Eagles a chance to win, an offense that, right now, can’t cash in on those opportunities, and, once in a while, a 404-error from the special units and sidelines.

As Addazio said, it is exciting to see what the team could become. But for many who have stuck with the Eagles this year, it’s just frustrating and heartbreaking.