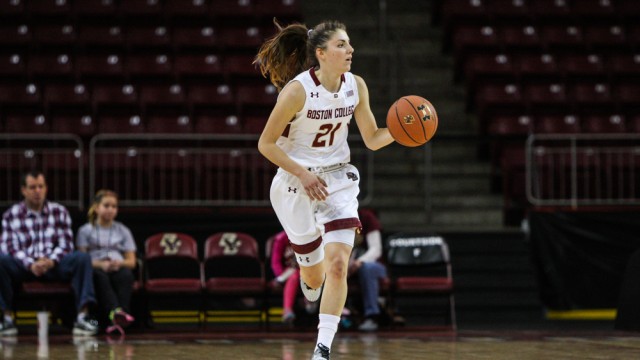 The Eagles trounced the Terriers 58-37 after a very strong defensive effort.

Johnson’s team won thanks in large part to the sharp shooting of junior Kelly Hughes. She was the game’s leading scorer, chipping in 15 points, while hitting on an impressive 5-of-7 from 3-point range.

This has become the norm so far this season for Hughes, who is shooting 57 percent from beyond the arc through four games.

BC came out firing in the first half, as Hughes hit three consecutive threes to give the Eagles an early 14-5 lead. From there, the Eagles wouldn’t look back.

BC’s early momentum continued throughout the first half, with solid play from Nicole Boudreau and Mariella Fasoula, who helped build a 31-19 lead at halftime.
Fasoula would finish the game with an impressive 11 points and nine rebounds, in what was a very encouraging performance for the freshman.

A 41-19 lead left no doubt as to the final outcome. Solid ball management and defense capped off what was never really a competitive contest at BU on Sunday.
One of the most encouraging parts of the victory for the Eagles came in the team’s execution of the basics—facets of the game like passing, rebounding and free throw shooting—that are generally only mentioned when done poorly.

On Sunday, however, the Eagles excelled in all three and it paid off.

BC out-rebounded BU 37-33, but the team’s biggest strength came in its free-throw shooting.

The Eagles shot at an 82-percent clip, ensuring that there were few wasted opportunities to score.

What most impressed Johnson, however, was not rebounding or free-throw shooting. He praised the team’s defensive effort as its strongest asset, and named it the number one reason for the 4-0 start.

“That’s why we have a four-game winning streak,” Johnson said. “For four games in a row, we’ve been able to hold down our opponents significantly in point production and from their field goal percentage. I think that’s a really good sign of a buy-in from our team on the defensive end.” 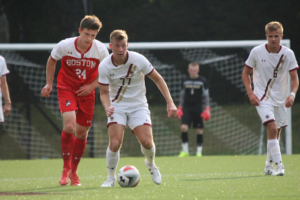