Within a few hours of the recent terrorist attacks in Paris on Nov. 13, Boston College’s Office of International Programs confirmed that all BC students currently studying abroad in the area were safe. Nick Gozik, director of the OIP, attributes this success to a clear emergency plan.

“In the case of the Paris attacks, all ran according to plan, thanks in large part to the excellent work of our onsite coordinator,” Gozik said. “Within a very short time, we were able to account for all students on the BC in Paris program, largely via social media.”

Once the safety of all these students was ascertained, OIP provided updates to all relevant senior-level administrators and staff at BC. The information was then passed onto the BC community through The Heights and a statement released by University Spokesperson Jack Dunn.

“In addition to verifying the safety of BC in Paris students, it was also necessary for us to reach out to students on other programs, some of whom study in other countries yet happened to be in Paris,” Gozik said. “Accordingly, we sent a message to all students studying abroad, encouraging them to reach out to us if they had any concerns about friends. We also asked coordinators in other cities to check in with their students, and they did so very quickly.”

The OIP monitors news from other countries on a daily basis through a variety of sources, including reports from the U.S. Department of State, the Overseas Security Advisory Council, BC’s Office of Risk Management, and other experts.

Katharine Callahan, MCAS ’17, who is currently studying abroad in Aix-en-Provence, said she found OIP helpful, informative, and comforting during the recent Paris attacks. Although her program is located a few hours south of Paris and therefore not in the immediate danger area, she received several emails, updating her on the situation, confirming her safety, and offering counseling and advice.

Yet Max Krys, CSOM ’17, who is studying in Istanbul, had a very different experience with OIP following the October bombings in Ankara, Turkey. Two bombs went off at a peaceful protest in Ankara on Oct. 10, killing 102 people—the deadliest attack of any kind the country has seen since it formed its republic in 1923.

“Over the next four days, some classes were boycotted, others cancelled, but most were used as time for people to reflect on the situation that had happened,” Krys said. “In my Turkish literature class, it finally became clear—people were losing hope in their country. My professor was in mourning for these victims, but also in mourning for his country which, he believed was slipping into chaos. There were daily protests held by students, vigils during the evening, and a sit-in on the quad that lasted nearly a week. I refrained from participating in any of these events, as I had been advised to not be apart of demonstrations, but it was impossible not feel the emotionally charged atmosphere.”

The following weekend, while touring the Dolmabahce palace and Besiktas with friends, Krys received messages from other friends, warning him that the American Consulate had issued an advisory not to be in such public places that day due to a bomb threat.

“Of course, already being down there, we carried on with our day, as it was too little too late,” Krys said. “The philosophy my friends and I have taken on is that if it’s our time, it’s our time. With a city like Istanbul, there is only so many precautions you can take before it’s just a matter of wrong place, wrong time. Over this tense week, I was not contacted by OIP at any point. I haven’t received any warnings of any kind, or for that matter, an email checking in on me since getting here. Ironically, the first email I received from OIP was the email regarding Paris, not Ankara or the other bombings that have killed hundreds in the east.”

Gozik pointed to a possible reason for the lack of communication. “With so many incidents taking place in the world, we filter the information coming in, and update students as needed” Gozik said. “We are careful about not sending too many messages, as this can desensitize students, and prevent them from reading important alerts. Each case is thus handled on an individual basis, as needed.”

Krys offered another potential explanation: he thought the media insufficiently covered eastern affairs. He explained that because of the level of unpredictability in places like Beirut, Baghdad, or even in Turkey, major events that have resulted in the loss of hundreds of lives have less shock value than isolated attacks in countries considered relatively safe. He said this shock value would explain why the media circulates more information about the Paris attacks than about the Ankara bombings or other similarly horrific occurrences in the Middle East. It could also explain the absence of information distributed to Krys when compared to the number of alerts sent to Callahan in France.

Following the recent frightening events, Krys said that he still feels very safe in Istanbul. “Even if OIP sent me precautionary emails, I would likely disregard them, for I won’t let other people’s fear stop me from living my life,” he said. 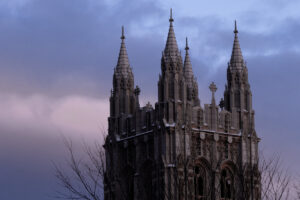