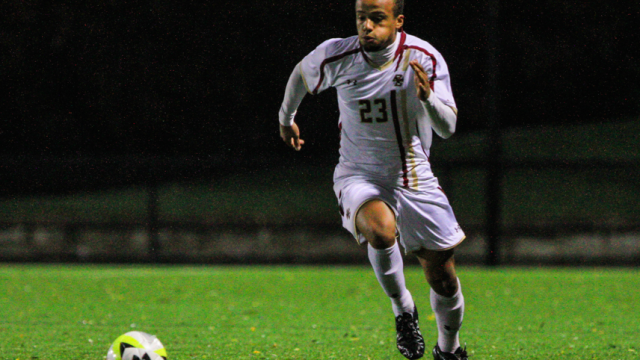 BC Beats Georgetown On Penalty Kicks, Advances To Elite Eight

When Len Zeugner lined up for Boston College’s only penalty kick of the season against Brown University back in October, he shot it wide and missed.

After weathering the initial storm from the Hoyas, who controlled 75 to 80 percent of the possession early in the first half, the Eagles struck first off a goal from the foot of Trevor Davock.

BC’s attacking front combined brilliantly for Davock’s sixth goal of the season in the 19th minute. Controlling the ball in the midfield, Zeiko Lewis played a pass to Simon Enstrom, who immediately turned at the top of the box and chipped a pass to the corner. An oncoming Ike Normesinu beat the defender to the endline and played a short cross for Davock to flick the ball past the keeper at the near post.

The Eagles continued to press the Hoyas high up the pitch, taking the home team out of its rhythm. The game more or less followed the same formula throughout the opening half, in which the Eagles won the ball back off a turnover and gave the ball to Lewis in the middle, who then ran at the backline with two or three teammates in support.

Following Davock’s goal, Georgetown got its best chance on the night when Alex Muyl had his shot blocked from point-blank range by Zeugner.

In the 30th minute, the Eagles had a chance to push their lead to 2-0 when Enstrom found himself with an open shot from the top of the box, but he sliced it wide.

A minute later, Georgetown came right back for a chance of its own, in which leading scorer Brandon Allen whiffed on a dangerous cross.

Both teams finished the half with seven shots each, each having a fair share of chances to break through—yet neither really challenged either goalie.

The second half started with more of the same from BC, as the combination of speedsters Lewis and Normesinu continually tormented Hoya right-back Joshua Yaro.

But Yaro came through when it mattered the most. Two minutes into the second half, Enstrom’s cross on the ground found Lewis clear on goal, only for Yaro to run in for the last-gasp block.

Despite the Eagles maintaining control over the game to start the half, the Hoyas equalized in the 59th minute.

Christopher Lema sent in a looping corner over everyone’s heads that fell to defender Keegan Rosenberry, who made no mistake on the one-timer and sent it past BC keeper Alex Kapp to level the game at one goal apiece.

The goal instilled new life into the Georgetown team, and BC played the majority of the final half hour on its heels.

As midfielder Arun Basuljevic set the pace for the Hoya attack, BC could only rely on springing Lewis forward on the counter. Lewis was the best player on the field, and almost ran past two or three defenders near goal, but couldn’t do much on his own.

Georgetown dominated the final 10 minutes of regulation, but the Eagles stuffed each of the Hoyas’ chances. BC’s Mohammed Moro led the way, coming up with one of the best plays of the game as he lunged to block Basuljevic’s shot from 6 yards out.

Zeugner put in a man of the match performance not only for his game-winner but for his work as center-back. He blocked a big shot in the first OT period to keep the game level and was breaking up attacks all game.

A late corner attempt as time expired went wide for the Hoyas, and a quick and scoreless OT period sent the game to penalty kicks.

Both coaches made some strategic moves to try to get the leg up in the ruthless, game-deciding sequence known as PKs. BC head coach Ed Kelly sent the trainer onto the field to make boot switches, giving the players different studs to combat the slippery conditions on the field.

Georgetown shot first in PKs, and Allen converted past a frozen Kapp.

In the most surprising move, Kapp stepped up to take BC’s first kick and buried it in the bottom-left corner of the net.

Both goalies guessed right in the second round but couldn’t do enough to stop the perfectly placed shots from Josh Turnley and Davock.

GU’s goal-scorer Rosenberry was the first to miss, sending the Hoyas’ third attempt well over the crossbar.

Lewis calmly placed the ensuing PK past a diving Auer, giving BC the 3-2 advantage after three rounds.

Lema and Raphael Salama both scored in the fourth round, leaving the fate of both teams up to the final kicker.

Kapp nearly came up with the win for the Eagles, guessing correctly and getting his fingertips on Brett Campbell’s attempt. The BC keeper slammed the ground in frustration, knowing he could have made the save.

Zeugner then sealed the deal as his attempt went off the crossbar and down before bouncing up into the top of the net for the win.

After nearly three hours of drama ending in a nail-biting five rounds of penalty kicks, BC moves on and will travel to Syracuse next weekend for a rematch with the ACC foe. The Eagles upset the Orange 2-1 at home in the only meeting this year between the teams.

BC has only advanced to the Elite Eight one other time in program history—in 2002—and the Eagles will look to continue their incredible run as they play for a chance at their first trip to the College Cup.