A winnable game slipped through Boston College men’s basketball’s fingers on Wednesday evening as the Eagles (3-4) squandered a halftime lead against Penn State (4-2) en route to a 58-67 loss. The defeat marked the fourth consecutive loss for the Eagles, as well as their first home loss of the year. Let’s take a look at what went right for BC:

AJ Turner’s Growing Confidence
Turner dominated the early goings of the game against the Nittany Lions by scoring a career-high 13 points in the first half—including eight points in a two-minute stretch. Turner’s aggressive play was on display early as he picked up fouls driving to the basket, allowing him to knock down a few foul shots and get his confidence going. With the Nittany Lions using zone defense to stymie the Eagles, Turner decided to make them pay with the three-ball—making three of his five 3-pointers in the half. Finally seeing some shots go in did wonders for Turner’s confidence, which probably explains why he attempted to murder a few Nittany Lions in the second half with a SportsCenter-worthy dunk that—fortunately for Penn State—caromed off the rim. Even though he couldn’t convert the dunk, Turner’s aggressive play is definitely what BC needs to be successful.

Dennis Clifford’s Continued Strong Play
Dennis Clifford’s teammates are passing him the ball more than they ever have, and Clifford is starting to make us understand why. Clifford scored a season-high 17 points Wednesday night, shooting 6-of-10 from the field and at times looking unstoppable. Clifford missed a lot of shots in the first half and only scored four points, but he was getting great looks, and you had the feeling that it was only a matter of time before the shots started falling. Then the second half began, and suddenly Clifford was Dwight Howard. It began with a layup he hit less than a minute into the second act, and continued with a leaping offensive rebound and subsequent putback less than a minute later. 30 seconds after that, Clifford rolled to the rim for a forceful dunk on Penn State center Jordan Dickerson, drawing a foul in the process.

“I think guys are just starting to get comfortable—including myself—within the offense,” Clifford said.

If the Eagles want to score any memorable upsets in the ACC this year, they’re going to need Clifford to maintain his high level of play.

Idy Diallo—A Man of Discipline?
In his last appearance at Conte Forum, Diallo found a way to foul out after only six minutes of game action—the second time in the season he had fouled out in under ten minutes. On Wednesday evening, however, Diallo played with the poise of a samurai, collecting only one personal foul in 11 minutes of playing time. Diallo moved his feet on defense instead of reaching at the ball, and when protecting the rim, he went straight up to contest the shot, as opposed to hacking wildly at the ball. One of the advantages to not immediately fouling out was that Diallo’s talents were put on display for a significant period of time, allowing fans and media alike to actually get a feel for how his game is developing. Overall, Diallo had a good night, having registered four rebounds, one assist, and a highlight-reel worthy block in his 11 minutes of action.

Now it’s time to take a look at what went wrong for the Eagles:

A Penn State Player Dropped 30?
Penn State’s Shep Garner was a beast on Wednesday night—he drained four consecutive 3-pointers before the Eagles even knew what was happening en route to building an early lead on BC. And just when BC had clawed its way back to take a halftime lead, and with Clifford and Turner playing their best, Garner opened the second half with another barrage of 3-pointers, again hitting four in a row (three of them in the span of one minute) to retake the lead for the Nittany Lions.

“It was just bad defense,” BC head coach Jim Christian said. “We didn’t even contest [some of Garner’s shots].”

BC is actually lucky that Garner only tallied 30 points—considering that he scored his 26th point with 15:54 left in the game. Ultimately, the Eagles lost the game because of sloppy offense when it mattered most, but without Garner’s offensive explosion, it wouldn’t have mattered.

Poor Foul Shooting
In what is becoming a recurring problem for the Eagles, BC shot 64 percent from the line on Wednesday night, missing nine foul shots in a game that it would lose by nine points. The poor foul shooting came just three days after the Eagles shot 63 percent from the charity stripe against Santa Clara and less than a week after BC shot 53 percent from the line against Michigan State. If the Eagles are going to win games against more talented teams this season, they are going to have to do so by paying attention to detail and taking care of the little things, such as managing turnovers and hitting free throws. Free throws are called “free” for a reason—they’re supposed to be easy to make.

“In a game like this, [missing free throws] is huge,” Christian said.

Simply put, 64 percent isn’t going to cut it when ACC season rolls around.

Milon and Meznieks Combine For Just Three Points
Matt Milon and Ervins Meznieks have been pleasant additions to BC’s team this year, and have provided reliable offense and good shooting for a team in need of both. As a result, it’s disconcerting for the Eagles to see them so irrelevant in the scoring column, particularly when you consider that in BC’s most recent victory over Harvard,the two freshmen combined for 28 points. Against the Nittany Lions, the two struggled to get open looks beyond the arc and were denied easy driving lanes. Perhaps because of matchup reasons, Christian elected to play Milon only seven minutes the entire game. Meznieks scored the duo’s only points on a 3-pointer in the second half. The freshmen’s small impact against Penn State figures to be an aberration, but if the Eagles want to get back on the winning track, there’s no question they need greater involvement from Milon and Meznieks—if for no other reason than to space the floor for the Eagles’ slashers. 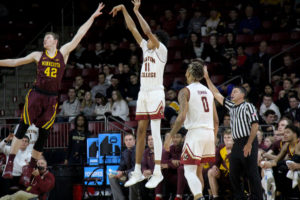 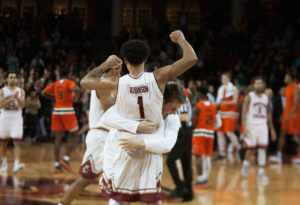