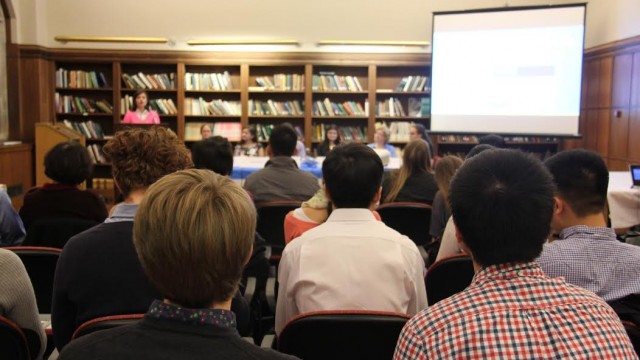 Lynn Lyerly, associate professor of history, began the discussion at the Elements panel talk Thursday by encouraging all students to participate in undergraduate research.

She said that she knew she wanted to pursue historical research when she was conducting research as a graduate student. She found that all of the texts she was looking at were about women, after a man had previously told her that they were all male-dominated.

“New eyes looking at something, seeing new things,” she said. “That was really an ‘aha’ moment.”

Lyerly suggested history students develop relationships with professors and students find advisers for their theses before deciding on a topic. She mentioned that doing research is important because it is what students will remember after graduation.

Conducting one’s own research and publishing one’s findings in Elements demonstrates independent thinking, drive, and organization, Lyerly said. Publishing in Elements will not only help students when applying for jobs or internships, she said, but it will also help them  figure out whether they want to pursue a career in research.

Elements highlights the research pursued by  undergraduates in various academic fields. Its goal is to showcase to the BC community the research that students are undertaking. This year marks Elements’ tenth year of publication. It is now also available for free online.

Danielle Nista, MCAS ’16, worked with Lyerly. She studied ways in which slaves in the antebellum South utilized song and dance in the form of self-expression. Her work was published in the Fall 2014 issue of Elements.

Nista first met Lyerly when a friend encouraged her to take one of Lyerly’s history classes. Throughout the semester, the two established a relationship—Nista was attentive, participated in class, and went to Lyerly’s office hours.

Nista explained that she never felt sure that her work was publishable until Lyerly encouraged her to submit her research findings to Elements. When her work was published, she felt proud and much more confident in her abilities as a researcher, she said.

Jaclyn Camuglia, MCAS ’17, worked with Eric Folker, assistant professor of biology, in his lab. They explored the role of the nucleus during muscle development.

Camuglia explained that she found Folker on BC’s research website during her freshman year. She learned about him and his research before reaching out to him to see if she could join his team.

Folker spoke to the science majors, urging them to find a professor not through classes but through BC’s research websites. He said that most of the professors who need help with research teach upper-level classes. If a student waits until junior or senior year to try to get into a lab, they will all be full.

Most labs only accept a few students, Folker said. He currently has ten undergraduates in his lab, which he explained is probably the largest a lab will ever get at BC. He encouraged students to seek opportunities at hospitals and pharmacies in the greater Boston area as well.

Unlike the history department, Folker said, science departments encourages students to find what they are interested in studying first and then find a faculty member.

Folker first knew he wanted to be in the field of scientific research when he was a junior in college. He was watching a professor conduct research, he explained, and was amazed at the enthusiasm the professor had for her work.

“I was only providing support, but actually seeing the data come off and seeing her be so excited about the fact that her paper was now done was probably the first time I was really excited and decided that science was something for me,” Folker said.

“Elements is an intersection between your research and the community.”

A friend introduced her to Erickson during her freshman year at BC. Her research was published in the Fall 2015 issue of Elements.

The social sciences, Erickson said, offer both quantitative and qualitative sectors of research.  It is important for students to find what they are interested in, because professors in the political science and international studies departments are usually flexible in the kinds of student research they help oversee.

Erickson explained that she usually finds research participants through her classes—she looks for the smart, organized, and engaged students. BC students have many resources available to them, Erickson said, and should therefore take advantage of them.

“Elements is an intersection between your research and the community,” McCaffrey said. “It was definitely a great experience that I didn’t see coming.”

Sophie Reardon is the head news editor for The Heights. She is from Alexandria, VA and is majoring in history and communication. Her favorite news source other than The Heights is The Skimm.