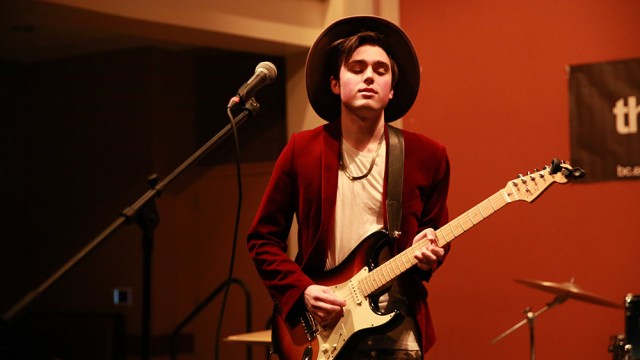 Before Friday’s Music Guild Winter Concert  began, only a hum of noise set the stage in the Vanderslice Cabaret Room as the eager audience mumbled indistinctly near the back of the sizeable venue. A lingering sense of excitement seemed to emanate from the quietly chattering crowd as they waited for the show to commence. The concert started fashionably late, but it began with a bang, both literally and figuratively.

The lineup consisted of 10 bands and performers, all talented in their own regard. The concert began with MT, a girl and guy duo who were melodically succinct and enjoyable to listen to. They opened the concert with a cover performance of Alicia Keys’ “If I Ain’t Got You,” which was performed pristinely, but without much deviance from the original. Notes were not always hit with grace, but at the end of the song it felt like a perfect performance. The exuberant duo followed their cover piece with a more original song, a merry mash-up of Childish Gambino’s “Sober” and “Have Yourself a Merry Little Christmas,” aptly entitled, “Have Yourself a Sober Little Christmas.” Even though microphone issues put a slight dent in the beginning of the piece, the duo’s voices blended perfectly together in the back-and-forth duet. Duets, generally speaking, were one of highlights of the evening.

The band Whatcha Think About Milk opened their performance with a rendition of Bruce Springsteen’s “Tenth Avenue Freeze Out,” enjoyably retaining the song’s jazzy undertones. Their following pieces featured the vocal duo The Kelleher Sisters, whose voices fused well with the overall sound in two great performances. The first was a cover of Mark Ronson’s “Valerie,” and the second was Of Monsters and Men’s “Little Talks.” The quality of the second was considerably better than the first, only because they stuck very heavily to the sound of the original, and the weight of Amy Winehouse’s spectacular voice was much too hefty for the band to carry. The rendition of “Little Talks,” although once again featuring almost all of the original tone, was quite fun to listen to and even participate in as the band requested that everyone join in on the song’s famous lines. The best aspect of the performance were the great keyboard and saxophone solos. Jazzy, authentic, and quite spirited, the solos were engaging and fostered loud, praiseworthy cheers from the audience.

The concert also featured Small Talk, Juice, Will Bolton, Phenom V, Funky Giant, Tabitha and the Halos, Got a Whim, and Blackhearted. The performers had an entertaining lineup of exciting covers and a sprinkling of great original pieces. Some of the most refreshing performances were by Will Bolton and Juice, seemingly two of the premier music makers on the Boston College campus. The fantastic musical quality and originality of both acts was very evident and incredibly fun to listen to.

Overall, the Music Guild Concert featured a display of great talent as well as a deep interest on part of the musicians with respect to their craft. While the concert was certainly not perfect on every note, this imperfection did not subtract from the show heavily. The only true downside was the low attendance. Although the energy was high, the numbers were much too low for such a great event. But this did not seem at all to affect the artists, who put out their greatest efforts in spite of a few setbacks.