Home » Sizing Up The Competition: Looking At The 2016 Oscars Contenders
Arts, Column

Sizing Up The Competition: Looking At The 2016 Oscars Contenders

Usually going into Christmas break, the fate of a few films at the Academy Awards has already been determined. This year hasn’t followed suit, and for the first time in recent memory  the Best Picture category is without a frontrunner.

Ten films you need to see this Oscar season:

Some say that Spotlight, the story of reporters at The Boston Globe who uncovered rampant sex abuse by Catholic priests, has become the  default lead. Directed by Tom McCarthy, BC ’88, Spotlight certainly is the strongest candidate of the released films, but three of the most-anticipated films of the year have yet to be seen. Those are Quentin Tarantino’s The Hateful Eight, David O. Russell’s Joy, and Alejandro Innaritu’s The Revenant.

It’s highly unlikely that Innaritu will win back-to-back Best Pictures (he won last year for Birdman). The film has already been screened to critics, and while it has been widely applauded for its visual design—he and cinematographer Emmanuel Lubeski made the entire film using only natural light—it’s not getting the same rave reviews that Birdman did.

Joy and The Hateful Eight recently screened for the first time to critics and Academy members, but both under the pretense of a review embargo. Rumors circulating seem to hint that Joy is Jennifer Lawrence’s movie and will certainly get a Best Picture nom, but that it isn’t quite the movie of the year. Tarantino has directed three films that have gone on to be nominated for Best Picture (Pulp Fiction, Inglorious Basterds, Django Unchained), but has yet to win. Same goes for the Best Director category, where he’s been nominated twice. The two Oscars he has won were both for writing, but there’s a good chance he’ll be nominated for all three this year.

For the films that have been released, it seems to be a year of old favorites. Bridge of Spies, The Martian, The Hateful Eight, Carol, Joy, and The Revenant all come from directors who have already had films nominated for Academy Awards. Those who haven’t, Lenny Abrahamson for  Room, Ryan Coogler for Creed, and John Crowley for Brooklyn, have all been critical darlings on the indie circuit in years past.

Room has definitely been the surprise hit of the year. Achieving critical success surpassed only by Spotlight, Abrahamson’s film seemingly came out of nowhere. With innovative distributor A24 backing it, Room seems like a sure bet when nominations are revealed in January. The film is about a young woman (Brie Larson) and her young son kidnapped and trapped in their perpetrator’s woodshed, and Larson has emerged as the clear frontrunner for Best Actress. Nine-year-old Jacob Tremblay is also deservedly in the running for Best Supporting Actor after his heartbreaking portrayal of  the son.

Another indie with an unexpected following is John Crowley’s Brooklyn. The story of a young woman who immigrates from a small town in Ireland to immigrant-heavy Brooklyn, it’s a heartwarming story with a compelling ensemble cast. Having worked mostly in theater, Crowley manages to keep his film emotionally complex and well-rounded. While it’s doubtful that it will take the top prize, Brooklyn  undoubtedly deserves the Academy’s attention.

In predicting this year’s awards, Steve Jobs was touted as this year’s The Social Network. But Danny Boyle’s take on Apple’s highly controversial leader, while greeted warmly by critics, was a heavy disappointment at the box office. It’s a smart, well-made film lost in an unusually packed awards season. While Michael Fassbender is sure to get a nomination for his performance as the neurotic Jobs, the film is losing steam, and fast.

One film that surprised this year was Ridley Scott’s (Black Hawk Down, Gladiator, Thelma and Louise) The Martian. The film was expected to be a blockbuster, but had less hopes for awards season. But The Martian has stayed strong not only at  the box office but also in its reaction from critics. It’s not only visually stunning, it’s also refreshingly funny, something not often seen in serious Oscar contenders. If both The Martian and Pixar’s Inside Out get nominated, they’ll have almost the same box office return as all of last year’s Best Picture nominees combined. Nominating box-office successes also means higher ratings for the actual ceremony, which will be hosted by Chris Rock on Feb. 28.

Chris Rock may be the lone black actor at this year’s Academy Awards. Continuing a trend of little diversity amongst nominees, this year will likely see no African-American actors or directors nominated. Unless Creed’s Ryan Coogler finds a directing nom, or Michael B. Jordan gets an acting nom for the same film, there won’t be. There are murmurings  about Will Smith’s performance in Concussion, but it’s unlikely he’ll make it to the Dolby Theater.

Tune in Thursday for the next half of this piece. 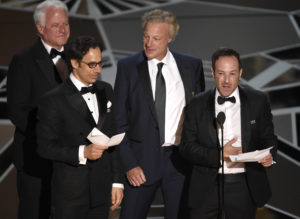