Over 80 Students Suffer From Food Poisoning Linked To Local Chipotle

At least 80 members of the Boston College student body are currently showing symptoms of food poisoning, confirmed Thomas Nary, director of University Health Services (UHS) and Sports Medicine, in an email to the student body this afternoon.

“It all started over the weekend toward Monday morning,” he said to The Heights this morning. “The common link for all but one of the patients has been Chipotle.”

Students initially began showing symptoms, such as nausea and vomiting, this past weekend. Although initially only a small number of patients sought medical attention— including members of the men’s basketball team, at least one of whom missed Sunday’s game against UMass-Lowell from illness—the number grew exponentially on Monday afternoon.

The UHS staff, working in conjunction with the Massachusetts Department of Public Health, is currently awaiting culture results to determine the cause of the food poisoning outbreak.

“At this moment, there is nothing confirmed,” Nary said this morning. “We are awaiting the results.”

The news comes after weeks of E. coli cases reported across the nation in states such as New York, Maryland, and California. There are currently 52 confirmed cases nation-wide—resulting from consuming beef containing the bacteria, according to the FDA—but the current cases involving the BC students would be the first, if confirmed as E. coli, in Massachusetts.

Early Monday afternoon, Maria Knoerr, an athletic administration staff assistant, advised all student-athletes, in an email to the staff, to refrain from eating at the Chipotle due to the suspected outbreak in an email, which Nary confirmed today.

Chipotle, which prides itself on “sourcing the very best ingredients we can find and preparing them by hand,” ceased production and closed for the day on Monday, the manager of the Cleveland Circle location said. The restaurant remains closed today.

“Health inspectors are here,” he said. “We are currently working on how to resolve this situation. I cannot comment any further.”

Currently, UHS strongly recommends maintaining strong hygiene, especially washing your hands constantly, but that the disease does not spread easily from person-to-person contact if good hygiene is maintained. 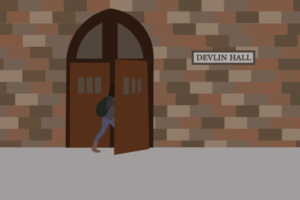