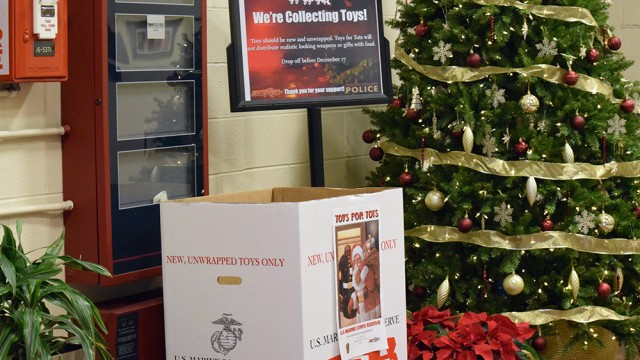 In accordance with the spirit of the holiday season, the Boston College Police Department has a philanthropic goal in mind: fill a police cruiser with toys to donate to underprivileged children.

BCPD has co-partnered with BC Campus Recreation in order to collect toys for this year’s Toys for Tots drive. The organization, which is run through the Marine Corps, collects donated gifts for underprivileged children throughout the United States.

“We actually have a very big SUV that we would like to see filled [with toys],” Lt. Jeffrey Postell said. “But, I’ll tell you, I’d like to actually have to get a trailer to put toys in, to hook to the back of a cruiser, and take to the Toys for Tots site for drop off.”

BCPD and BC Campus Recreation are encouraging students, faculty, and staff to donate unwrapped and unused toys, games, and books. All collections will be donated to children in and around the Boston area.

Collection sites for the toys have already been set up in the police department in Maloney Hall and inside the Flynn Recreation Complex. The toy drive will end Dec. 17.

BCPD is also currently working to implement a service where a police officer can pick up donations for the drive from students on campus who are unable to drop them off on Lower Campus, Postell said.

“But, I’ll tell you, I’d like to actually have to get a trailer to put toys in, to hook to the back of a cruiser, and take to the Toys for Tots site for drop off.”

BCPD began to look into holding a fundraiser for the holiday season this past November. When they decided to host Toys for Tots, BCPD asked BC Rec to partner with them. The Plex receives heavy foot traffic on a daily basis, so the police department thought it would be the ideal location to set up, Postell said.

“I absolutely believe in Santa Claus,” Postell said. “I totally believe in the spirit of Santa. It may not be the big, jolly man in a red suit, but I believe that people like us, others who bring in toys, and those who organize these events, those are your Santa Clauses.”

In addition to BCPD and BC Rec, other BC departments annually hold Toys for Tots drives, including the BC Athletics Department. BC Athletics began collecting toys at sports games in early December. Students and fans will have the opportunity to drop off toys at six remaining women’s basketball, men’s basketball, and men’s hockey games. Attendees who donate a gift will receive either discounted or free admission.

Toys for Tots was founded in 1947 by Major Bill Hendricks of the U.S. Marine Corps Reserve in Los Angeles. The organization was spread nationwide by the next year. Last Christmas, Toys for Tots received over $284 million in revenue, the most successful year to date.

“Ultimately, the more toys we get delivered and dropped off, the more families can have a good Christmas and not have to worry during this time of year to be able to provide for their families,” Postell said.

BCPD Toys for Tots
McWilliams: ‘It Is Time For Us To Focus On Welfare, Not Warfare’
Top 10 Tweets: Reacting To The Norovirus Outbreak