Home » From Food Truck to Brick-And-Mortar: Bon Me Dazzles In Chestnut Hill Square 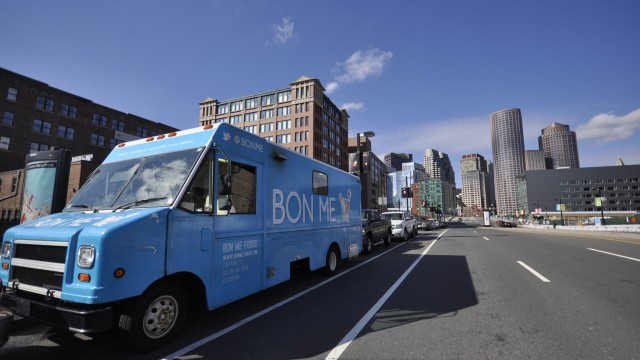 From Food Truck to Brick-And-Mortar: Bon Me Dazzles In Chestnut Hill Square

This past Saturday, the familiar maze-like parking lot located in the center of Chestnut Hill Square featured a noticeable addition: a vibrant yellow truck parked among the masses of neutral black and white minivans. The truck, stationed in front of the site of the newest addition to the square, was nothing other than the original award-winning Bon Me food truck

The brightly-colored vehicle spent the day in Chestnut Hill Square to promote the Dec. 18 opening of the newest Bon Me brick-and-mortar location. Throughout the afternoon, the Boston-located chain’s co-owner, Allison Fong, and a small team of staff served complimentary samples of Bon Me’s trademark Vietnamese-with-a-twist fare to Chestnut Hill shoppers, introducing the residents of Chestnut Hill to what may become their new favorite casual dining location.

Although the nature of the event limited the items available for sampling, passersby had the opportunity to try two of Bon Me’s most popular menu items: warm rice bowls or cold soba noodle salads. Each bowl could be topped with either roasted soy and paprika tofu, or spice-rubbed chicken. Regardless of the combination chosen, the samples were a glimpse of what is to come, filled with bright, yet fresh flavors.

It was this same culinary experience that allowed the truck to win The City of Boston’s Food Truck Contest in 2010. Since, duo Patrick Lynch and Allison Fong have grown their business from a single food truck, which hit the streets in 2011.

“The City of Boston [Food Truck] Contest was looking to add the street food that they’ve seen in other major cities—like healthy, quick, inexpensive, [which] were all things that really appealed to me,” Fong said. “We developed this concept for the contest, and as it turned out, it has worked out really well in the city of Boston.”

The Chestnut Hill location is the fifth in a series of Bon Me restaurants, which can also be found in found in Cambridge, Fort Point, Alewife, Boston Public Market, or on-the-go in one of Bon Me’s five roaming food trucks.

Although this is Bon Me’s first location outside of the Boston and Cambridge area, Fong feels very comfortable in the Chestnut Hill community, as she grew up very close to the area and even worked in the community as an adult. This understanding will benefit Fong as she irons out the specifics of the restaurant menu over the coming days.

“With all new locations, we look and kind of think what are the things we think we could be doing in the future, or would be fun to do and customers would like,” Fong said.

She says that the establishment is currently developing the menu for the new location, as they usually have special items, such as different add-on items for the salads and bowls, for each individual restaurant.

“For example, at our Fresh Pond location, when we opened up, we served a Japanese sweet potato fry, as well as lemongrass fried chicken,” she said. “[It] was completely new for us.”

With such an extensive and fluid menu, Fong is always looking for ideas. Since the Bon Me menu encompasses the traditions and flavors of many different cultures, Fong and Lynch find inspiration in everything, from techniques they admire while eating out on their own, to flavors they are simply eager to explore.

After such a busy few years of rapid growth, the pair will likely take a breath in the coming months.

“I think we are just going to focus on making sure we serve the same food, with the same quality and care that we’ve been doing since our first truck,” Fong said. “We’re probably not going to be growing quite at the [same] pace.”

food trucks bon me
Keaton, Lawrence, And Mara In Line For 2016 Oscars
McWilliams: ‘It Is Time For Us To Focus On Welfare, Not Warfare’ 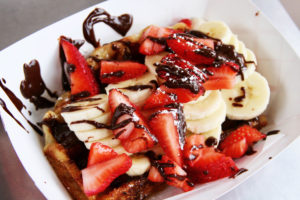