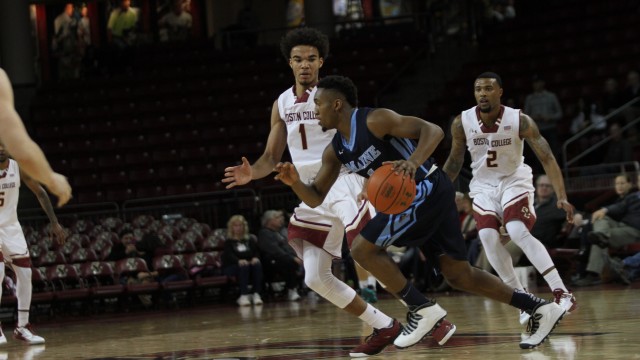 With 3:43 left to play in the first half, graduate transfer Eli Carter stepped up to the free throw line with a one-and-one opportunity. Carter sunk the first and then the second to put the Eagles up 29-24. While the lead was by no means commanding, those two points were the first in a run that ignited Boston College men’s basketball to go on a 64-36 run, in a game full of runs from each side, over the remainder of the game.

The Eagles established themselves earlier in the game by getting out to a quick lead with baskets from Carter, Dennis Clifford, and Jerome Robinson to establish a 7-1 lead only two minutes in. While the score was in the Eagles’ favor from the start, the team got itself into some trouble early in the game.

“It’s tough because we’re not a very big team to begin with, we’re small at the 4,” Christian said, commenting on what it was like to deal with the early foul trouble. “So, we had to play a smaller lineup and that is when we pressed a little bit. Got the ball up and down the floor and it can be very tough for the other team to match up with that.”

Even with the foul trouble, the Eagles continued to forge ahead in the game and not let it slow them down. BC focused on pushing the tempo and pace throughout the game, as Christian said. Forced to go small without their two big guys, the Eagles were able to effectively utilize transition and capitalize on their multitude of ball-handlers.

Maine went on a 21-11 run in the middle of the half to bring the game to 27-24, when Carter stepped up for his two momentum-shifting free throws. The Eagles closed out the half by scoring 17 points in the final four minutes and holding Maine to 5 points over the same span. Carter and freshmen Robinson and AJ Turner were the keys to the Eagles’ play in the first half, with Turner offering multiple highlight-reel plays.

Just as BC ended the first half on a run, it began the second half with another one. The Eagles came out and scored nine points to make it 55-29 at the start of the second half, before Maine could even net a basket. Maine was overmatched and simply lacked the athletes to keep up with or contain BC’s attack. The differences in each side’s troops could be seen on many plays throughout the game. Whether it was Turner making a highlight play, Clifford making dunks in traffic, or Robinson hitting killer threes, the Eagles were a clear mismatch for the Black Bears.

By the middle of the second half, BC’s lead had stretched to 66-39. The Eagles refused to get complacent.

“We’ve got good kids and they work, man,” Christian said after the game. “They play for one another. It was just good to see them feel good about it. Like I said, get that swagger back.”

The game could be seen as ending at the 2:31 mark, when Christian removed his starters and put in the guys from the end of the bench. With the deep reserves in, the Eagles were still able to continue their dominance down the stretch, outscoring Maine by one over the rest of the game.

The final result was due to a total team effort with balance up and down the box score. No player scored more than 16 points, yet five players hit double figures. And after a long stretch of losses (and illnesses), a blowout win against a regional opponent might get BC back on track.