Home » Kentucky Quarterback Patrick Towles To Transfer To BC 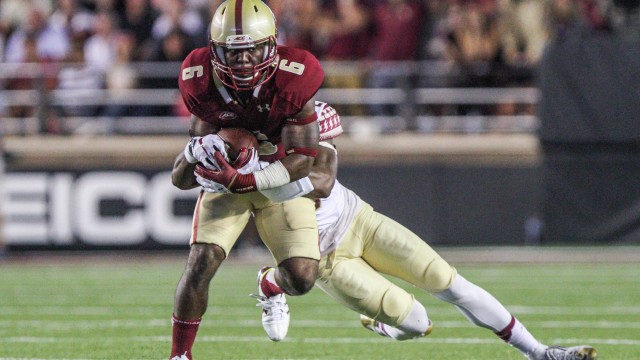 Kentucky Quarterback Patrick Towles To Transfer To BC

Boston College football may have finally found its signal caller.

Former University of Kentucky quarterback Patrick Towles, a fifth-year senior, has announced Friday afternoon that he will play his final season with the Eagles. Towles announced the news via a YouTube video on his brother’s account. BC Athletics confirmed the news later in the evening.

As a redshirt junior, Towles threw for 2,148 yards at a 56.1 percent completion rate, to go along with nine touchdowns, and 14 interceptions. His best season was 2014, when he threw for 2,718 yards, 14 touchdowns, and nine interceptions at a 57.4 completion rate. His quarterback rating was 122.8 and 112.0 for those seasons, respectively. The Fort Thomas, Ky. native has thrown for over 5,000 yards in his career, yet only rushed for 65 yards last season (albeit with five touchdowns). His best season on the ground was also 2014, rushing for 305 yards on 146 attempts and six touchdowns.

According to Kentucky Athletics’ website, Towles remade his throwing mechanics in the winter of 2014 year, helping him become only the fourth player in Wildcat history to top 3,000 total yards in his first full season (2014). He is the grandson of Baseball Hall of Fame pitcher Jim Bunning and won Gatorade Player  of the Year in Kentucky in his senior year of high school. As a fifth-year transfer, Towles is eligible to play immediately for one season for head coach Steve Addazio’s team. Addazio has found magic with transfer quarterbacks in the past, helping University of Florida transfer Tyler Murphy turn into one of college football’s biggest sensations in 2014, as he broke BC’s career record for rushing yards (1,623) in only one season.

In the 2015 season, Towles had some struggles, losing the starting quarterback job to junior Drew Barker following Kentucky’s 21-17 loss to Vanderbilt. Towles did not play in UK’s 11th game against the University of North Carolina Charlotte, yet saw time on the final drive of the Governor’s Cup against rival University of Louisville, a 38-24 defeat for the Wildcats. (That drive ended in an interception.) Towles’ addition now gives the Eagles five quarterbacks on the roster, joining sophomore Darius Wade, redshirt freshman Troy Flutie, and true freshmen John Fadule and Jeff Smith. That quintet will be joined by 2016 recruit Anthony Brown, who is grayshirting and will be heading to BC in January.

Excited to announce I’ll be playing my fifth year at Boston College! The only Jesuit FBS School in the country! #GoEagles #SaintMichael