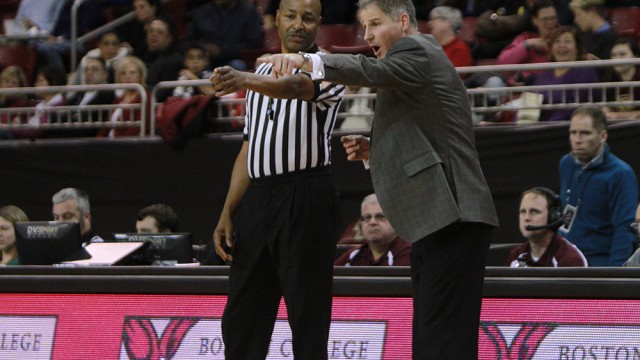 A few weeks ago, Boston College women’s basketball was glowing. The Eagles could not have been happier about where the team was standing. They had the best program start since 2010-11. On top of that, all 11 players were actively involved in scoring, the defense was tight, and the inside-out offensive strategy that head coach Erik Johnson boasted about in the preseason finally came together. The Eagles were excited to start ACC play for the first time in years, looking to make some noise in one of the country’s toughest conferences. Virginia Tech did not want to hear any of it. The Hokies (13-1, 1-0 Atlantic Coast) drowned out BC (11-2, 0-1) in a 58-33 blowout at Conte Forum.

BC started out strong, just like every other game. Ball movement was fast, defense was sound, and Kelly Hughes made a 3-pointer from way downtown. And then, just like in many of its other games this season, BC briefly crumbled. The Eagles allowed their opponent to get in down low while they failed on the offensive end. This gave VT the opportunity to go on an 8-2 run, putting BC in an early 12-5 hole. But Johnson’s squad always found a way to come together and make a comeback. Why would this game be any different?

It seemed like BC would take on ACC teams like it did non-conference opponents, going on a 10-1 run to end the first quarter. Thanks to a buzzer beater 3-pointer by Ella Awobajo, BC had the lead 15-13 going into the second quarter.

The Eagles allowed the Hokies to go on a 12-0 run to open the second. Luckily, Martina Mosetti ended the drought with two jumpers, and with the help of Mariella Fasoula, BC was back in the game, but still down 28-23. The Eagles momentarily pulled it together in order to close out the half at 33-25, before a much-needed break in the locker room.

Then, disaster struck. The third quarter was the worst basketball the Eagles have ever played. Absolutely nothing went right. The Eagles allowed VT to score 14 points, while they scored only two of their own—thanks to two free throws made by Hughes. The team tried to get the ball to Fasoula to chisel away at the deficit from down low. Instead, BC repeatedly tossed the ball out of bounds or straight into the hands of a VT player.

The mistakes did not end there. Although BC had four steals and the Hokies turned the ball over six times, the team did not capitalize once. The Eagles went 0-for-12 from the field, including four beyond-the-arc attempts from 3-point star Hughes. The team continued to foul and turn the ball over, handing the Hokies every opportunity to run away with the game. BC was crumbling, and nothing seemed to be working. With one quarter to go, BC was down 47-27.

Into the fourth, senior Nicole Boudreau had zero points. The bench had no points from the field. The team had not made a field goal since the 2:52 mark of the second quarter. If the Eagles wanted to make a comeback they had to work, but they just could not do it. Fouls, turnovers, and missed shots continued to plague BC. After going 17:45 without making a field goal, the Eagles finally ended the drought with a layup by Fasoula. Hughes responded with a jumper to make it a 53-31 game. BC might have had the energy left for a comeback, but the team did not have the time.

Mosetti looked up at the scoreboard, disappointed. Down 24 points with 3:41 remaining, the Eagles did not have a shot. BC kept struggling from all over the court and continued to miss every shot they took. Awobajo and Katie Quandt each made a free throw, but BC could not make the score respectable and went down 58-33.

The Eagles were ready to make some noise in the ACC. The game plan was set and the players were prepared, or so it seemed. But the ACC opener hit the Eagles hard. They wanted to drain threes, sink layups, and dominate on defense. The Eagles wanted their mantra to be heard loud and clear, but they made no noise. That’s because the Hokies made sure to put them on mute from the start.