Over the last few days, Reid has surfaced as a potential candidate to replace Don Brown, who has accepted the defensive coordinator position at the University of Michigan. Reid’s served as high as a head coach, albeit at the FCS level. A five-time Coach of the Year in the Atlantic-10 and Yankee Conferences, Reid captained the University of Massachusetts (prior to its jump to FBS), the University of Richmond, and the Virginia Military Institute to a combined record of 87-101-3 record, including four berths in the NCAA Division I-AA playoffs.

The Medford, Mass. native, who played defensive back at the University of Maine, also has considerable experience as a defensive coordinator, including stints at Richmond prior to his head coaching gig, and the University of Virginia. Most notably, however, Reid has spent time in Chestnut Hill. He was defensive coordinator under Danny Henning in 1994. That season, the Eagles were led by Reid’s strong defense—BC ranked seventh in the nation in points per game at 14.7—and also spent time flirting with the AP Top 25. BC finished at No. 23 with a pair of wins over No. 11 teams: 30-11 over the University of Notre Dame and 12-7 over Kansas State University in the Aloha Bowl in Honolulu, Hawaii.

Although two of Brown’s assistants, Coleman Hutzler and Kevin Lempa, left for positions at other universities, the fate of the third, defensive line coach Ben Albert, remains to be seen. It is likely that Albert remains on the staff, however. He coached Richmond’s defensive line for several seasons when Reid was its head coach. 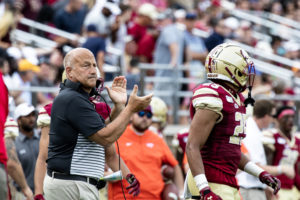 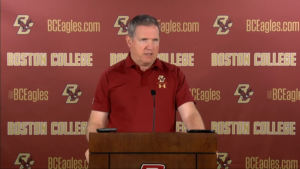