Home » Previewing BC Basketball: What to Expect from Notre Dame 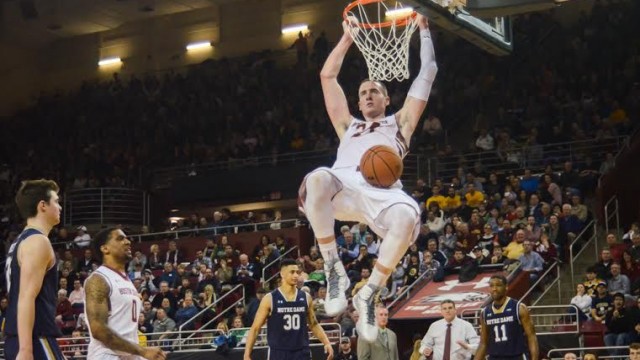 Previewing BC Basketball: What to Expect from Notre Dame

Boston College men’s basketball (7-7, 0-1 Atlantic Coast) enters Thursday’s matchup against the University of Notre Dame searching for its first conference victory. The surging Eagles have been playing some better ball lately, winning four straight before dropping their first ACC matchup at home against No. 15 Duke University by a 81-64 final, a contest that played much tighter than its score. Other than a late first half run by the Blue Devils, the two teams traded buckets for the majority of the game, with BC getting hot and playing a competitive, confidence-building second half against the perennial ACC powerhouse. The Eagles were only outscored 44-40 in the back half of the game.

Notre Dame (9-4, 0-1), on the other hand, dropped its last contest on the road against No. 5 University of Virginia by a respectable 11 points (77-66), a game in which the Fighting Irish actually outscored the Cavaliers in the second half. But, like BC, Notre Dame lacks a marquee win against a good team. Head coach Mike Brey’s squad can only count a most impressive victory of its 2015-16 campaign coming against a lackluster University of Iowa team.

Thursday’s 7 p.m. meeting at Conte Forum will mark the 26th rendition of the Holy War on Hardwood. Notre Dame leads the all-time series 15-10. The Eagles, however, have not gotten much luck lately—they’ve lost nine of their last 10 against the Fighting Irish.

Last time they played: The Eagles and the Irish met twice last season, with Notre Dame handling BC with relative ease in each contest.

In their first matchup, then-No. 10 Notre Dame put on a show early in South Bend, Ind., opening up a 34-9 lead over the first 15 minutes of the contest. BC’s Olivier Hanlan accounted for almost for almost half of BC’s points, putting up 28 in a losing effort on impressive 11-of-16 shooting. Hanlan drilled four inconsequential 3-pointers with less than four minutes to play in the game, cutting into Notre Dame’s lead but never truly threatening it—the game ended 71-63. Notre Dame distributed its own scoring fairly evenly, with four scorers in double digits, Zach Auguste (16), Jerian Grant (17), Pat Connaughton (11), and Steve Vasturia (17). Of the group, only Auguste and Vasturia have returned for this season.

In their second matchup, this time in Chestnut Hill, Aaron Brown led all scorers with 22 points, Hanlan contributed 19 of his own, and big man Dennis Clifford made his presence known, just missing his career highwater mark with 17 points, notching six boards and four assists along the way. While cruising to its 87-70 victory, Notre Dame continued its varied onslaught, with six scorers hitting double digits, including Auguste and Vasturia, who had 14 and 10, respectively.

Three Keys To the Game: