Home » Previewing the Second Half of the Season for Men’s Hockey
Featured Story, Men's Hockey

Previewing the Second Half of the Season for Men’s Hockey

Boston College men’s hockey started out its first half of the 2015-16 season spectacularly, for the most part, falling only to Rensselaer Polytechnic Institute in their second game. The Eagles benefitted from its talented freshman class, which helped provide offensive energy that was sorely needed. Thatcher Demko played better than ever to give the Eagles six shutouts.

The No. 7 Eagles, however, ended their first half in an unimpressive manner. Continuously plagued by third period losses and an abundance of penalty minutes, they struggled against teams like Northeastern University and the University of Notre Dame. In their first game of the second half, they even fell to the Big Ten Conference’s last place team, The Ohio State University.

Hello from the other side.

BC will have a difficult second half coming out of its three straight losses, facing high-ranked teams such as No. 3 Providence College, No. 15 Notre Dame, No. 11 Boston University, and No. 5 Harvard University. And it only gets worse: Demko is out of goal for the Eagles indefinitely due to an upper body injury, replaced by second semester freshman newcomer Ian Milosz. With that all in mind, here’s a look at the Eagles’ upcoming opponents:

The defending national champion’s clever play stems not from its offense, but its defense. The Friars generate their plays by seizing upon turnovers and transferring the puck up the ice. Their penalty killing unit does similarly well, killing 64 out of 75 penalties and ranked No. 16 nationally. Providence knows how to keep itself out of the box, with opposing teams typically having more time in the box than the Friars. Contributing to the Friars’ effective play is goaltender Nick Ellis, who currently has a conference save percentage of .962 and goals against average of a low 1.14. Providence will look to regain its winning stride after its most recent loss to Brown, and its earlier 4-3 overtime loss to Cornell in the Florida College Hockey Classic. This slide has dropped Providence to No. 3 in the USCHO.com rankings after holding the top spot for the entire season (the University of North Dakota is now at No. 1). BC hopes to avenge its loss to Providence in the consolation game of the same tournament, but to do so, BC must seek to get goal-scoring chances in front of the net.

The tough Terriers found themselves in the 2015-16 season without Jack Eichel, the high-scoring forward, who they lost to the Buffalo Sabres. BU has not found itself with the high level of success that it had last year, but is still holding its own in the Hockey East, most recently edging out No. 5 Harvard in an away game, 6-5. Danny O’Regan, leading the team with 21 total points, scored twice in the third. O’Regan is just one of a strong senior class, including defenseman Matt Grzelcyk As captain of the Terriers, Grzelcyk has proved himself a valuable asset, often generating energy from the BU zone. He showed tenacity in the win against Harvard, where he was the starting point for the rush late in the game. The Terriers started out the new year by adding to its offensive stride with two new forwards, Oskar Andren and Erik Udahl. The third period win for the Terriers sets them apart from the Eagles, who recently have struggled with losing leads in the third. BU is typically an aggressive team, usually with more penalty minutes than the opposing team, BU with 97 total penalties and its opponents with a total of 82. This will no doubt be shown in its games against rival BC.

The Minutemen have had a quiet, but tough season so far, ending their first half with six straight losses.These losses, however, included games against No. 3 Quinnipiac and No. 15 Notre Dame. UMass lost forward Frank Vatrano to the Boston Bruins last spring, and has had trouble generating offensive energy. They have had a whopping four ties—all in the Hockey East. Austin Plevy is just a freshman, but is the team’s third-highest goal scorer with six goals and nine assists. While its record is 7-9-4, only one of UMass’s losses was against an unranked team. The Minutemen came out of their downward spiral in the second half of the season with a win against Army, and a loss against Yale in overtime. UMass, however, cut its two-goal deficit in its third period against No. 12 Yale, so it should not be underestimated. If the Yale game is an indication of how UMass’s season will continue, BC should be on the lookout in the third period.

Marred by losses, UConn looks to gain some momentum, having most recently snapped its eight-game losing streak with two wins against against No. 10 UMass Lowell and a tie with Merrimack. The Huskies are tough, with freshman defenseman Joseph Masonius leading the team with 15 penalties and 30 penalty minutes. Masonius is also UConn’s third-highest point generator, with four goals and seven assists. UConn usually struggles offensively, which shouldn’t be too much trouble for BC’s defense, but Tage Thompson does lead the nation with eight power-play goals. The Eagles should also keep an an eye out because goalie Rob Nichols usually ups his play when faced by them, making 26 saves to Demko’s 29 in their last meeting. With Nichols backed by the UConn defense, the Huskies are sometimes difficult to beat. The Huskies’ wins against ranked UMass Lowell and BU also show UConn’s potential.

Notre Dame just ended a four-game winning streak with two away games ending in ties against the University of Denver. The team is well-rounded, with strength in goalie Cal Petersen’s .926 save percentage and in its high-scoring forwards Thomas Dipauli, Anders Bjork, and Jordan Gross. The Fighting Irish live up to their name, with four players serving more than 20 minutes each in the penalty box. They are ranked No. 17 for penalty minutes. Notre Dame isn’t very effective on the power play, only scoring on 12 out of 64. They are ranked No. 24 nationally. To beat their rivals, the Eagles must keep their penalty minutes down and try to get as much even play and power play time as possible to break the Fighting Irish’s momentum.

No. 5 Harvard will face BC in the first round of the Beanpot at TD Garden. Harvard has had key wins against No. 12 Yale and No. 15 Notre Dame, and goalie Merrick Madsen has three shutouts this season with a save percentage of .940. The Crimson has also only tied with Union and Rensselaer, proving that the team is beatable. If given the lead, Harvard will run with it, with an average 3.92 goals per game and Jimmy Vesey as Harvard’s leading goal-scorer with 10 goals and 12 assists. When the Crimson is leading after the first period, its record is 7-1-1. The Eagles cannot give up an early lead to the Crimson, but if they do, the third period will prove interesting. Both BC and Harvard have recently given up leads in the third, for Harvard, in its game against BU.

UNH has racked up some wins against teams like Merrimack and Maine, but will face higher-ranked teams in the season’s second half. The Wildcats have a formidable offense, with the nation’s top two goal-scorers Andrew Poturalski and Tyler Kelleher, respectively. Poturalski alone has 18 goals and 18 assists. The Wildcats were on a four-game winning streak to end the first half, but it was defeated by the University of Vermont on Jan. 2 in a loss, 3-2. UNH has been flaky, as its loss against UVM shows, but when the team has chemistry, it is tough to beat. Not only does UNH have a good offense, but it also has a steady unit that has killed 46 out of 57 penalties. The Eagles’ defense will have to pursue the forecheck and keep the Wildcats from getting chances close in on the net, all while preventing blue line turnovers.

Northeastern potentially could meet BC in the second round of the Beanpot, depending on how the first round goes. The Huskies in the 2015-16 season have an abysmal record, losing every game in the Hockey East. Northeastern still has notable play, which has helped it tie with No. 1 Quinnipiac and win against Michigan State on Jan. 19. Zach Aston-Reese leads the squad with six goals and 11 assists. The Huskies have killed 52 out of 67 penalties, so they are not incapable of slowing down the Eagles’ often slow to start power plays. Most memorably, they knocked the Eagles out of the Beanpot last season, so it would be unwise to disregard them.

Merrimack has thus far flown under the radar with its overall even number of wins and losses. Its high penalty kill—63 out of 78 penalties—stands in contrast to its power play unit that has only scored in seven out of 60. The Warriors are currently on a three-game losing streak, thanks to Army, Union, and Dartmouth. Despite their record, Warriors goalie Collin Delia has a save percentage of .917 and a 6-4-5 record, ranked No. 18 in the nation. Two of Merrimack’s most recent losses are away games—the team’s home record is 4-3-3. Merrimack needs offensive rejuvenation. If the Warriors can deliver on the power play and skate consistently well away from their home rink, then they could be a team to beat.

UVM, despite the slow start to its season, is currently on a three-game winning streak. While the wins were against Lake Superior State, Colgate, and UNH, this newfound momentum could help the Catamounts’ play against Dartmouth and Providence. Forward Mario Puskarich has a prolific 82 shots on goal and has 12 assists, and Jarrid Privitera is tied nationally for No. 38 in most goals scored. The Catamounts have yet to gain their footing on the power play, only scoring on seven out of 67 chances, ranked No. 59. Although their power play struggles, Tom Forgione is No. 17 in the country for shorthanded goals, with 12 points. It will help immensely if the Catamounts can direct some of their penalty-killing energy into their power plays.

UMass Lowell faced BC in the last game of the regular season last year, with the matchup ending in a tie. The River Hawks have had a good season so far, notching in a 3-1 win against Notre Dame in November. Despite having 36 penalty minutes, C.J. Smith has eight goals and 11 assists and is among the top 50 goal scorers in the country. Goalie Kevin Boyle has also had a solid season, currently ranked in the top ten of goaltending leaders with a save percentage of .936. Boyle also has four shutouts. The River Hawks have a skilled defense, so they will most likely concentrate on bringing up their offense. The Eagles will have to generate offensive energy, because their defense is equally matched with the River Hawks’.

Statistics are as of Jan. 8 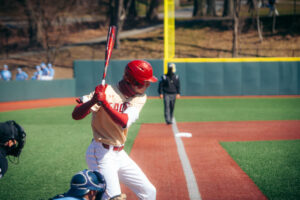