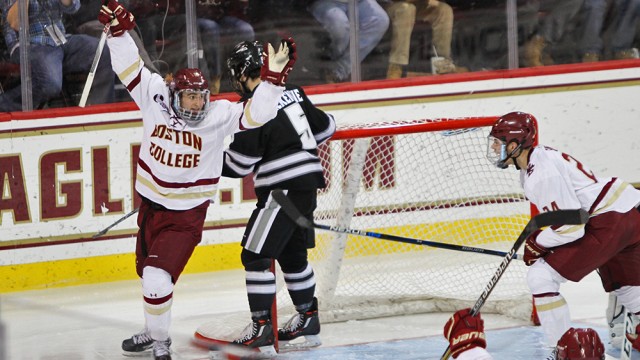 Jerry York didn’t have Thatcher Demko on Friday. He didn’t have his primary backup, Chris Birdsall, either. With both of his goalies sidelined with upper body injuries, York had to hold his breath, accelerate first semester freshman Ian Milosz to campus, and roll him out onto the ice. His first competition wasn’t an easy one: No. 3 Providence College, the defending national champions.

For one night, all of that was okay, because York did have Colin White. The freshman center dominated in his first game back from the U-20 World Juniors Hockey Tournament in Finland. White tilted the ice every time he stepped onto it, dangling and grinding his way to three goals, one assist, and lots of scoring chances in Boston College men’s hockey 7-3 win  in front of a sellout crowd at Kelley Rink.

“I thought he [was] excellent tonight,” Providence (13-3-3, 4-1-2 Hockey East) head coach Nate Leaman said of White. “ He was the best player on the ice by far. I thought he was making a play every time he got the puck.”

BC’s defense didn’t make Milosz, fresh from the United States Premier Hockey League’s Junior Bruins, do too much, blocking eight shots to limit the number of times the goaltender had to move post-to-post. The Grafton, Mass. native’s 6-foot-7 frame got in the way enough to turn away threats from several talented Friars, such as Brandon Tanev and Hobey Baker candidate Jake Walman. After White made it 1-0 in favor of BC (14-4-1, 7-1-1), Milosz made the best save of his short career when he denied Nick Saracino on a cross-ice feed from Tanev, sliding across the crease in time to keep BC’s lead, one it never relinquished.

“We got to tighten up, play harder, [because] we had just seen Ian for two practices,” York said. “We had been depending on Thatcher for so long and all of a sudden a brand new guy steps in. […] I think he just did a really good job.”

But a good job might be an understatement by York, a coach who rarely boasts about his players. In his first game ever against an incredibly tough opponent, Milosz made 24 stops to help his boss earn his 998th win.

“We just told [Milosz] to have fun tonight,” White said, adding that he met the freshman during Friday’s pregame skate. “We’re not asking him to do too much.”

to dumping the puck in, White created his first goal by gaining the offensive zone and passing it off to Ryan Fitzgerald before driving the net. Fitzgerald threw it toward the goal, and White redirected it past Friars’ goaltender Nick Ellis.

A Hanover, Mass. native, White uses his dangerous trio of skill, speed, and aggression to create an irresistible wave of energy. Eventually, he takes that energy to such a high level that his talent and grit overcome opponents to the point where it’s impossible for him to not make something happen. Take a look at his assist. White flew down the right wing past Providence’s penalty killers midway through the second period, turned hard toward the net, and fired a cross-crease pass to Alex Tuch’s tape as he hit the ice. He later chipped away at both Ellis and his replacement, Hayden Hawkey, for two greasy rebound goals that topped off his hat trick.

White left the sellout crowd wanting one last thing: he failed to break out his “dab” celebration that dazzled at the World Juniors. Though the Ottawa Senators draft pick said he may be saving it for bigger games, York glowingly declared that “coach is a big fan of the dab,” while patting his star on the back postgame. Without Demko, and desperately in need of a PairWise-worthy win, York’s best skater swooped in from Finland took over in BC’s biggest game to date. All-world goaltender goes down, and in steps an all-world tour de force. Must be nice for Mr. 998.