Home » Previewing BC Hockey: How The Eagles Can Beat BU 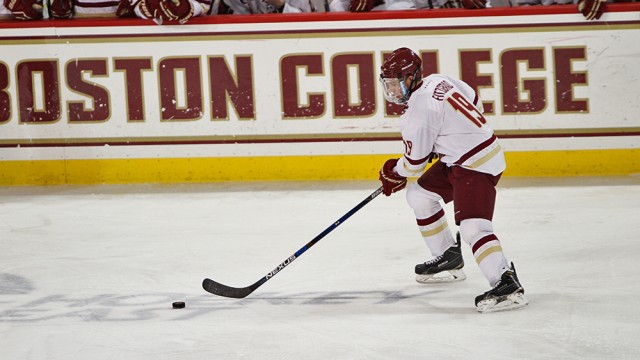 Previewing BC Hockey: How The Eagles Can Beat BU

This weekend’s showdown marks the renewal of one of college hockey’s fiercest rivalries, as No. 10 Boston University (11-6-3, 5-3-2 Hockey East) and No. 4 Boston College (14-4-2, 7-1-2) square off for the 268th and 269th times in this historic rivalry. Expect emotions to be running high on both sides as the two teams prepare for a home-and-home series, especially as head coach Jerry York is vying for his 999th and 1,000th career victories.

The weekend series provides more than just a couple of rivalry games, as the two-game set could have a critical impact upon the Hockey East standings, and, more importantly, the PairWise Rankings. Entering Friday night, BC sits in second place in Hockey East, four points ahead of fourth place BU. With first place University of Massachusetts Lowell playing its weak Amherst counterpart in a home-and-home, and the third-place University of Notre Dame taking on Merrimack College, the Eagles need a sweep to keep their current pace. The Terriers, on the other hand, could avoid falling too far behind with a sweep of their own.

As far as the PairWise Rankings are concerned, BU has the upper hand. The Terriers are ranked at No. 9, one spot ahead of BC. It doesn’t take much to make a massive jump in the rankings—BC leapfrogged several teams from No. 16 to No. 10 last weekend—and the Eagles desperately need “signature wins” to bolster their case to earn a spot in the 16-team NCAA Tournament field.

BU comes into the matchup playing solid hockey as of late, winning three in a row and four of its last five contests. BC’s most recent action came last weekend in another home-and-home series against Providence. The Eagles dominated the first matchup against the Friars, winning 7-3, before earning a tie after an impressive three-goal comeback in the second contest.

Last time they played: The rivals only met twice during the 2014-15 season. BU took the first matchup 5-3, while BC took the second, 4-2. Much has changed in 12 months. Last season’s Hobey Baker Award winner Jack Eichel has moved on from torching NCAA competition at BU to lighting up the NHL scoreboard for the Buffalo Sabres. Eichel was a huge part of BU’s run to the National Championship game last season, as was star goaltender Matt O’Connor, who has also gone to the pros. There has been major turnover down the Green Line, but many players from the National Championship runner-up squad still remain intact, such as captain Matt Grzelyck and Danny O’Regan. The Terriers have also successfully injected new talented freshman into their lineup, including Bobo Carpenter, the brother of BC women’s hockey star Alex Carpenter.

Three Keys to the Games: