Home » A Seduction by Food: How a New Movement Captured the Country 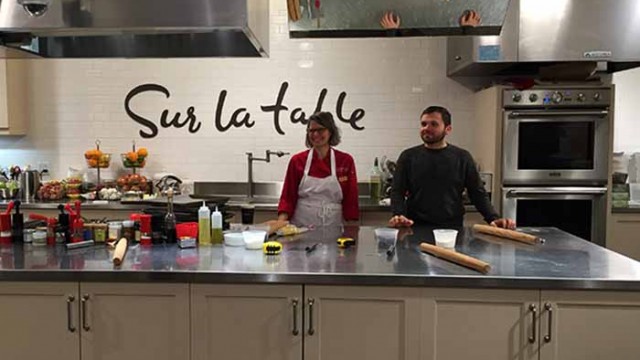 A Seduction by Food: How a New Movement Captured the Country

Downtown in Copley Place, the Sur la Table teaching kitchen surrounded me, fluorescent light beaming down. As I stood across from pastry chef—and my teacher for the day—Rachel Miller, all I could think of was the layers of butter and pastry that swelled sweetly just before flaking away as my teeth sunk in. Over the course of the next three hours, I would make the croissant.

I thought back to the day before. On Sunday at two in the afternoon, I sat at a small café table beneath the street over in the South End. White tile covered the floors while dim light encircled the room and glinted off the Perrier bottles that dotted the dining space. I looked down at the menu at Gaslight, a French brasserie, searching for coffee and the usual omelet that colored my Sunday brunches. That afternoon, however, the pan au chocolate was speaking to me.

Back in the kitchen, the rhythm of croissant making was peaceful and methodical, a mathematical performance.

The butter and pastry were layered and layered tirelessly. The chilled dough was then cut into the triangles and two-inch rectangles that would become the homes of chocolate, almond, and cheese. Twenty minutes in the oven, and they glinted gold on the butcher-block countertop.

Sitting on their cooling racks, the golden pastries were saying more than “Eat Me,”—sorry Alice in Wonderland. Through the process of their creation, I began to look at the memory from the day before with more fondness and appreciation rather than just sweet-tooth satisfaction.

Food is art. Food is also the only form of art you can experience with all five senses, unless you take to eating canvas, oil paint, or wood. Food, in many ways, is the most accessible form of art because it is necessary to survive, literally. And this necessity makes it an art form that people want to explore themselves by trying their own hands at cooking and baking. Food is an art form that most are not afraid to delve into, unlike painting, printmaking, creating large-scale installations, or playing the guitar.

As this art form has taken hold in restaurants across America, gourmet eating has become so pervasive that over the course of the last few decades, “foodie” became a way to identify oneself. Consumers have become both more erudite and selective about the food they consume for themselves and their families, causing a language shift—adjectives are more prevalent than ever because we must differentiate between the superior and substandard. Adjectives commonly used today include free-range, grass-fed, organically-raised, hormone-free, locally-sourced, and in-season. We live in the age of the hyphenated moniker.

As knowledgeable as our population is becoming, however, most only experience gourmet food created by a chef. After repeated gastronomic memories, one becomes well versed in the difference between bouchees and bouillabaisse, but lacks understanding of time, technique, and skill.

When I first bit into the croissant at Gaslight, I thought of little else besides the warm chocolate, flaky pastry, and the calories I didn’t care to ask about. But after standing for hours and making croissants myself, by becoming the artist, I found a deeper appreciation for the commonly known pastry because I understood it on a level beyond reception. I knew it from inception.

As the foodie movement continues in cities across America, the American consumer might find that to enrich the dining experience beyond knowing terminology, they should try their own hand at the most beloved, and sometimes abused, art form. Creating can exceed receiving and yield more understanding. But the finished product doesn’t taste bad either.