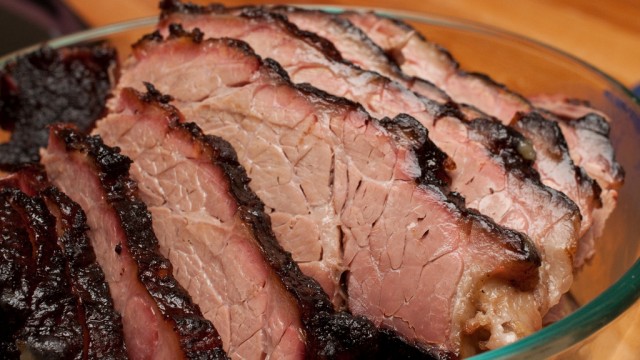 At Trignis, Smoking Permitted (And Encouraged)

The Northeast is not often associated with the Southern tradition of smoking beef, especially due to ever-changing weather conditions that affect the quality of the end product. The Harvard-based startup Trignis hopes to reshape the age-old process and bring it into the 21st century.

Founder Jordan DeGraaf, a senior in the engineering program at Harvard University, got the idea for a smoker from a junior-year project in which all the students in the class were tasked with building a better grill or smoker.

“In the course there is a new topic every year,” she said. “We had to develop the concept and build the product. We actually did over 880 hours of testing in the freezing Boston weather.”

The result of all of the testing is the Trignis Smart Smoker, “one that implements better airflow, an automated fan system to eliminate hot spots in the grill without the need for constant monitoring, and, most significantly, an integrated smartphone app that reduces labor to the touch of a button,” according to its website.

The new design aims to create a constant environment inside the grill that allows for a consistent result, time and time again. Ensuring that environment in the harsh New England winters was one of the biggest challenges the development team faced.

“Smoking is a long process, up to 10 hours,” DeGraaf said. “It’s easier in the South than in the North, with the big hour-by-hour temperature changes that cause temperature discrepancies in the grill itself.”

To combat it, Trignis implemented a fully-automated system that can be operated from the app itself—the algorithms in place control the airflow and the amount of smoke in the smoker itself, and self-regulate by sensing the temperature in different spots of the grill and compensating as necessary.

The app does more than simply ensure the ideal conditions for the meat to cook. It also serves as a step-by-step tutorial for those new to smoking meat.

”It works a lot like autocorrect,” DeGraaf Said.  “If you are a novice it will walk you through the process, but, if you’re more advanced, there is a lot of customization and recipes available too.”

“The goal is to make better meat and be more accessible to the consumers,” DeGraaf said. ”It works a lot like autocorrect: if you are a novice it will walk you through the process, but, if you’re more advanced, there is a lot of customization and recipes available too.”

After its final presentation during the spring of 2015, which featured representatives from Williams-Sonoma, the development team decided to go forward as a startup. The feedback the team members received from taste tests was positive enough that they decided to pursue it full-time as soon as they graduate.

“This is a first-class brisket … as good a brisket I’ve had in months and months,” Dave Schaefer from Blue Ribbon BBQ said during a tasting session.

Originally, Harvard took care of ensuring the proof of concept and filed for the intellectual property patent, but, Trignis has begun working with its own startup lawyers and is evaluating licensing the remaining IP from Harvard.

“After we’re done putting all of the pieces in place in terms of development, we go full force,” DeGraaf said.

One of the biggest challenges encountered during the transition from product to company has been that many startups are based around software, while they are dealing with hardware, which involves manufacturing, transportation, and storage, on top of all of the other issues software companies face, such as marketing and app development.

“We can’t follow the 1,2,3 startup guides … we are paying good attention to all the details, [we face] higher stakes,” DeGraaf said.

Trignis is currently applying to tech incubators and searching for beta testers—they are looking to launch their product sooner rather than later. Much of the press the company has been getting has been from more “techy” publications and word of mouth, according to DeGraaf.

“We want a fun, techy, cool … product to have in the backyard,” she said. “Although we first want to target beginners interested in techy products, while eventually reaching the die-hard smokers who want the best quality meat possible.”

startups harvard university Williams-Sanoma Trignis
Despite Deadline Set by UGBC, Administration Has Not Yet Adopted an Action Plan Regarding Race
Men’s Basketball Returns to Profitability, According to Equity in Athletics Data