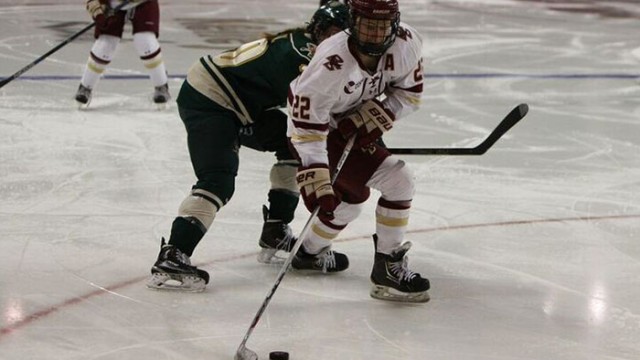 Boston College women’s hockey (26-0-0, 17-0-0 Hockey East) entered Kelley Rink on Saturday afternoon for a matchup against the University of Vermont (6-17-2, 4-9-2) with high stakes. The Eagles came in riding a 25-game win streak, which has earned them the top rank in the nation. Perhaps more importantly, those 25 consecutive wins were good enough to tie the longest streak in program history. The second game of the weekend double-header against the Catamounts provided the Eagles with the opportunity to establish a new record. The Eagles took advantage with a convincing 6-1 victory.

This 26th straight win moves the current streak into second place for the longest winning streak in NCAA history. The Eagles still have their work cut out for them if they want to earn the number one spot. The University of Minnesota holds the record for longest win streak, which lasted 62 games from 2012-13. The win also marked the tenth straight for the Eagles over the Catamounts.

The Catamounts were simply outmatched from the opening face off until the final buzzer, as the Eagles imposed their will for the full 60 minutes.

Despite the puck residing almost exclusive in the Vermont half during the first period, the Eagles were only able to find the mesh once in the first period. The Eagles outshot the Catamounts 14 to six, but it was the way in which the Eagles killed two power plays that best demonstrated the upper hand they had established. Despite being down a skater, the Eagles’ defensive line pressured the UVM puck-handlers well beyond the midline. Not only did they kill the penalties, but they forced turnovers leading to promising offensive chances.

Working with just a single-goal lead, the Eagles came out in the second period with the intention of putting away the Catamounts for good. Just 3:14 into the second period, senior Haley Skarupa dazzled the UVM defensive line with precise stick-handling en route to her 21st goal of the season to make the score 2-0. This opened the floodgates for BC, as the nation’s second-highest point-scorer, senior Alex Carpenter notched two consecutive goals. Carpenter scored her second goal of the afternoon with a crafty shot off the back of Vermont goaltender Molly Depew landed just over the goal line. Megan Keller added a fourth goal through Depew’s legs to cap off the BC-dominated second period. With the score at 5-0 entering the third period, it was apparent that the Eagles were poised to capture their 26th straight.

The third period featured more of the same puck dominance by the Eagles, as a beleaguered UVM squad skated without the same heart that they had displayed earlier in the contest. The BC front line was reminiscent of a firing squad, as it fired 46 shots at Depew. Vermont managed a single goal with 3:21 remaining, taking advantage of a 5-on-3 power play. The single goal might have provided some reassurance, but it was simply not enough.

It was not only a day of milestones for the program, but also for Carpenter. With her three-point afternoon, Carpenter became the eighth player in the NCAA to reach the 250-point mark for her career.

“She came to the rink today ready to take control of the game,” head coach Katie Crowley said of Carpenter’s performance.

Despite the dominant showing and the significance of the win, Crowley believes there is still room for improvement.

“I would like to see [them] continue to come to the rink with a little bit more energy,” she said. Crowley, however, still was pleased with her team’s performance. “I thought it was a good win, a good weekend overall,” she said.

Crowley conceded that in the midst of such a long streak it can be difficult to keep focused and energized, but she commended her players’ ability to score goals and make plays when they needed to.

Featured Image by Lizzy Barrett / For The Heights