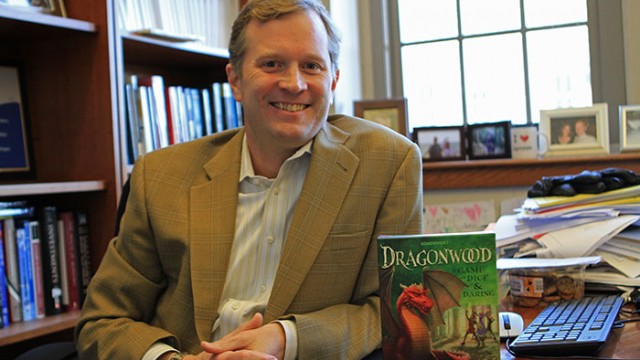 Kisgen’s board game Dragonwood hit stores last summer to critical and commercial success. While Kisgen remarked that the game has little to do with his finance teaching and research at BC, he noted that he drew on his background as a math major to forge a gameplay that engages both strategy and chance.

In Dragonwood, players act as travelers in a magical forest trying to capture creatures like bears, ogres, and dragons, represented by illustrated cards. Each person starts with a certain hand of numbered cards that he or she must combine into poker-like straights or groups of the same colors or sequences. The person can then roll a special set of dice to try to match their total with a number on one of the visible creature cards. The players can also draw enhancement or event cards that randomly advantage or disadvantage them.

“At a simple level you’re doing addition with the dice, and you’re doing addition with trying to add up your score given different points,” Kisgen said. “It teaches different number patterns. On a more complex level, you can do some pretty sophisticated probability calculations to try to figure out based on the dice and the numbers what’s your probability of achieving a certain creature given their points. And it also teaches strategy and planning.”

The game was originally designed with a younger age group in mind. While the Dragonwood box says that it is best for players ages eight and older, and Kisgen quotes the best age for it as between six and fourteen, it has reached a larger audience of whole families and older players.

Dragonwood was especially successful over the Christmas season and received five awards, including the Mensa Select, awarded by the American Mensa high IQ society, and the Parents’ Choice Silver Honor, awarded by the Parents’ Choice Foundation to honor, “the best material for children.” The combination of awards granted to Dragonwood seems to indicate both its popularity and its potential for education and intellectualization.

“I didn’t want it to be 100 percent strategy because I think that’s just like chess, where everybody’s very serious and only the best strategy will win,” Kisgen said. “But I also didn’t want it to be 100 percent luck. And I also wanted it to be something that was accessible to a lot of people. I think the fun thing is that it’s 20-30 minutes, but you still get that fantasy feel. You feel like you’re going in a forest, taking on creatures.”

Kisgen got the idea for Dragonwood over two years ago and made a publishing deal with Gamewright in a matter of months. The company illustrated the game pieces while Kisgen developed the original rules and pieces. Much of the design was also made with his children, a 7- and 9-year-old boy and girl. He tried to include characters that would appeal to both boys and girls.

“We play it all the time,” he said. “My kids still love it. I mean, we must have played it over 100 times by now. I still really enjoy it even though I have played it a lot.”

Kisgen was delighted with the success of his game and said he already has a few next steps in mind. Besides working on cards for an expansion pack to the original game, allowing players to extend the gameplay time beyond the usual half an hour, Kisgen is working with some other game designs and has already finished developing another idea.

“I don’t know what I’ll do, but it’s a fun thing for me to do” he said. “It’s sort of like solving puzzles to try to come up with a game. So I enjoy it, whether it ends up being successful or published. I’m just playing with my kids.”

CSOM kisgen
Professor Paul Lewis Collaborates with Students to Recover Poems
This is Holy Ground: A Message to the Class of 2016