Yashar Montoya, Member of the Class of 2019 Who Deferred Acceptance, Missing

Update, March 18 at 5:32 p.m.: Yashar Tesori-Montoya has come forward to say that he was never missing, and that his family misrepresented the note he left.

Yashar Montoya, a student accepted to the class of 2019 who chose to defer his acceptance for one year, has not been seen since Nov. 7, 2015, according to members of his family. On Jan. 14, 2016, a Facebook page was made titled, “Come Home, Yashar,” telling those who know Montoya of the circumstances. The page included pictures of Montoya, and informed the audience of his last appearance near Times Square on Nov. 7. This morning, the page went public for a few hours, before returning to its private state.

Montoya, who his family says also goes by the names Yashar Tesori-Montoya and Yashar Tesoriero-Montoya, was accepted as a member of the Carroll School of Management Class of 2019 in April 2015. His family has said that he attended the final orientation session in Aug. 21, 2015, but went on a leave of absence for the Fall 2015 semester seven days later. Montoya is in the Agora Portal student roster—however, according to Dean of Students Thomas Mogan and University Spokesman Jack Dunn, Montoya deferred his acceptance and was never enrolled in classes. BCPD said that it takes matters like this seriously and acts upon them immediately, but could not comment further.

“Yashar Tesori-Montoya is not enrolled at Boston College,” University Spokesman Jack Dunn said in a phone call. “Records show that he was accepted from Regis High School, but deferred his admission and never enrolled.”

“We wish the best for Yashar and his family during this difficult time,” Dunn said.

According to BC’s Missing Student Notification Policy, students residing in on-campus housing can register a student to be contacted through the Agora Portal if he or she goes missing for more than 24 hours. In these circumstances, the student’s Confidential Contact will remain in confidence, where only authorized campus officials and law enforcement officers conducting the missing person’s investigation have access to the information.

Yashar Montoya’s brother, Joshua Tesoriero, said that Montoya returned home in September and lived with his father in New York, N.Y. He got a part-time job and was trying to work, but in early November, Montoya left home, leaving a note that said, “Look guys, I’m going to be fine, don’t worry about me.”

At that point, Montoya ended all communication with his family, shutting down his phone and email address. His family believes there is no current way of contacting Montoya.

Tesoriero said that the family tried to reach out to the New York Police Department, which told him they could not do anything because Montoya is 18. He also reached out to the University, but was told that it is their policy to not disclose any information about students, per the Family Educational Rights and Privacy Act (FERPA), according to Tesoriero. He also said that he spoke with ResLife.

“I don’t know why he’s doing what he’s doing,” Tesoriero said in a phone interview, “but if he kinda wants to do his own thing, hey, I just wanna make sure he’s okay.” 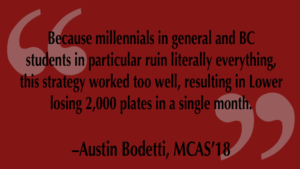