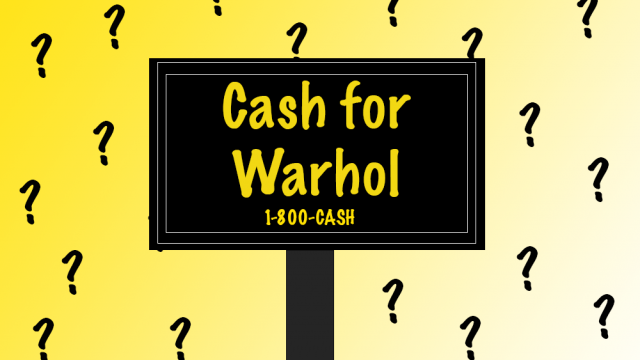 Over the past few months, I’ve become convinced that the Boston area doesn’t get enough credit. People who view the area from afar see a veritable mountain of snow covering pink whales, boat shoes, and respectable businessmen who can trace their family history back to Plymouth Rock.

There is the ever impressive Museum of Fine Arts and the Orchestra peeking out from the snowdrift because we are, of course, talking about a metropolitan area, which means that it not only has history but also culture.

But, once you really start looking at Boston, and the cities surrounding it, you might notice that they walk themselves back from the abyss of stuffiness (something that can come naturally to cities with just the right amount of history) because they have developed a trait coveted in both people and cities alike.

The Boston area refuses to take itself too seriously.

Take for example one of the newest storefronts in Cambridge, Cash for Your Warhol. If you walk past it, located in Inman Square, the aggressive yellow signs in the windows might make you pause for a minute.

Cash for your Warhol? Are there people who wonder what to do with all the extra Warhols they have lying around their homes? Who are those people? They must be really rich.

You may be intrigued enough to start peeking inside the windows of the store, which at first glance looks authentic enough, kind of like those stores that dramatically announce that they will ‘buy gold for cash.’ But there are no Warhols of any kind in the store. There are only more of the brightly colored Cash for Your Warhol signs and a few checks hanging on the wall.  At this point, you might be so curious as to how this establishment functions that you actually go into Cash for Your Warhol.

If you do get to that point, you will discover that the whole thing is but a joke, with conceptual art projects all wrapped into one storefront.

Cash for Your Warhol is the brainchild of Geoff Hargadon, a Somerville resident, whose day job is managing a wealth management practice. Hargadon’s passion for photography and conceptual art lead him to begin the project in 2009 with just a few Cash for Your Warhol signs. Hargadon intended to comment on the financial crisis of the time, and the way art is sold in the modern world, according to the Boston Globe. The project gained momentum from there as public interest grew, and separate galleries began featuring Hargadon’s Warhol signs. Cash for Your Warhol even has a function phone number and a website proclaiming that you can “Raise cash!” and “Avoid bankruptcy!” with your “Confidentiality assured!”

For me, the fact that this form of storefront can exist within the Boston area is a victory.  Cash for Your Warhol is a platform that opens up a discussion for more serious topics, like the nature of art or the financial crisis, while allowing people to laugh at the absurdity of it all. It is the kind of place that lends an important element of lightheartedness and sends out the signal that Boston is the kind of city that you want to actually be in, not just look at from afar.

I guess that cities are not too dissimilar from people. The enjoyable ones are constantly changing, with just the right about of stuff staying the same. Like people, they also need the ability to disassociate themselves from the stressful expectations of their past and their present so that they can make people laugh. They need to be a space where conceptual artists feel comfortable setting up transient shops that will brighten someone’s day and give them something amusing to discuss at the dinner table.

Like Hargadon, the Boston area needs, and seems to have, a practical side, where they manage wealth, balanced by a side where they can express—or provide a place for others to express—their passions.