Home » In Support of the Iran Nuclear Deal
Opinions, Column

In Support of the Iran Nuclear Deal

On Jan. 16, 2016, the United Nations lifted most of the economic sanctions that have been imposed on Iran since 1979, in accordance with the Nuclear Deal that was passed unanimously by the U.N. Security Council in Vienna last year. While it is not a perfect solution, it is plain to see that the deal achieves the primary goal of the international community: preventing Iran from building nuclear weapons, and preventing a nuclear arms race in the Middle East.

The deal eliminates Iran’s enriched uranium stockpile and restricts the number of uranium-enriching centrifuges that Iran needs to build a bomb. While the Iranian government retains the ability to enrich uranium up to 3.67 percent for nuclear power plants, which is much lower than the 85 percent enrichment level for viable atomic weapons, the International Atomic Energy Agency monitors radioactive material processing at all levels of the supply chain in order to notify the U.N. if the country is violating the resolution. Madeleine Albright, Colin Powell, Francois Hollande, David Cameron, and Angela Merkel have all praised the deal for making the world a safer place, but it is not a perfect solution.

Some critics of the deal have speculated that Iran is the military giant in the region, and that the deal enables Iran’s ruling clerics to eventually acquire weapons of mass destruction to destroy Israel. These criticisms are completely unfounded. In reality, Saudi Arabia and the United Arab Emirates outspend Iran on military expenditures nearly 7:1. The Iranian military has relied largely on obsolete military equipment from before the Shah was ousted in 1979. The idea that Iran wants nuclear weapons to destroy Israel is even more outlandish. In 2012, the CIA released findings from an investigation on Iran that stated it had completely abandoned its nuclear weapons program, and had no intention of starting a new one. Even if Iran had nuclear weapons and wanted to use them against Israel, there is no evidence to suggest that the ayatollahs are insane enough to risk their own annihilation to do so. Many critics have failed to put forward the best way to prevent Iran from getting nuclear weapons: a nuclear weapon-free zone.

The Iranian foreign minister, Mohammad Javad Zarif, has called for a non-nuclear zone in the Middle East (the Egyptian government first proposed such a zone in 1980), which most of the 162 Nuclear Non-Proliferation Treaty countries are in favor of. Last year in May, the United States blocked a U.N. addition to the nuclear non-proliferation treaty to create the non-nuclear zone. The U.S. was criticized for stonewalling the month of negotiations in defense of Israel, which is not a Nuclear Non-Proliferation Treaty member. If the U.S. had not blocked the resolution, the U.N. Security Council would not have needed to negotiate a separate deal with Iran at all.

While it is the most straightforward measure to prevent Iran from getting nuclear weapons, the non-nuclear zone is outside of the Overton window in Washington. Getting support from senators to approve the nuclear deal was difficult enough, as congressmen were worried that their constituencies might not support them in the upcoming election. New York senator Chuck Schumer voted against the resolution, despite the vast majority of Democrats voting for it. It took President Obama eight weeks to get enough votes to get the deal to pass, after Senator Tom Cotton of Arkansas convinced 46 of his Republican colleagues to sign a letter to the ayatollahs of Iran stating that a new Congress or president could easily undo whatever the eventual agreement entailed. The letter was an unprecedented attempt to undermine President Obama’s and Secretary of State John Kerry’s credibility in negotiating with Iran. Even though the deal got enough votes to pass in order to prevent the worst possible consequences, the president and Congress should work together to create a non-nuclear zone to ameliorate the problem permanently.

Creating a non-nuclear zone in the Middle East will be particularly difficult for politicians who receive donations from the military-industrial complex. Israel’s assumed nuclear deterrent strategically allows the country to occupy the Gaza Strip, the West Bank, and the Golan Heights militarily without repercussions. The Israeli possession of nuclear weapons allows the country to engage in aggressive military practice with imported conventional weaponry. American arms manufacturers profit from U.S. military aid to Israel, as well as direct purchases from Israel. While politicians voted in favor of this particular deal to prevent the proliferation of nuclear arms, it is not clear whether or not these same politicians would vote to completely expel weapons of mass destruction from the region, because the political will does not currently exist.

The international community largely agrees that the safest future for us entails the ban of nuclear weapons in the Middle East, if not the entire world. Intellectuals in the U.S. have a responsibility to themselves and the world to advocate peace and make the truth known. 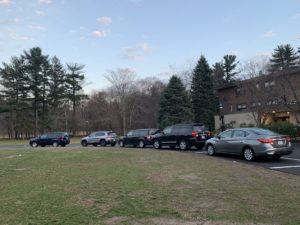