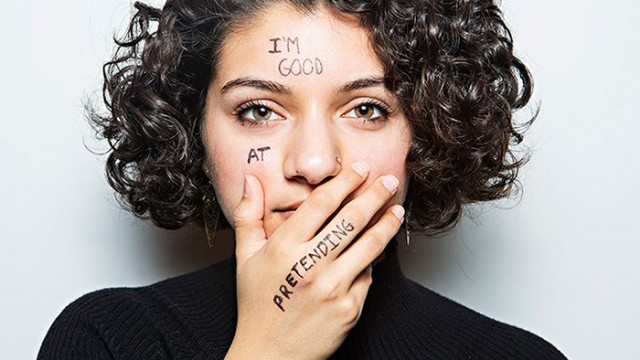 Photos of students, their hands and faces covered with inky phrases like “swept under the rug” and “smiling but not happy,” are scattered over Facebook in an effort to share insecurities, and why those insecurities are not absolutely defining.

The What I Be Project, an eight-day online photo campaign, is returning to campus for the second time as part of Undergraduate Government of Boston College’s Mental Health Spotlight Series. Created by artist Steve Rosenfield in 2010, the What I Be Project focuses on building students’ self-confidence through expressing their insecurities.

The photo campaign is “designed to create an open and safe community around campus that encourages diversity and empowers students,” according to the UGBC website. The project will culminate Monday, Feb. 1, when UGBC will host an event to reflect on the campaign.

“It completely shatters the image of the ‘perfect BC student.’”

As a part of the project, Rosenfield will photograph portraits of over 80 Boston College undergraduate students, each with his or her largest insecurity written somewhere on his or her face or hands. The photographs will then be publically posted in an album on Rosenfield’s professional Facebook page throughout the week. Links to the album will also be made available on the UGBC Facebook page.

“I think the best part about What I Be is that everyone struggles with something, but the important thing is not letting it define you,” said Connor Marshall, UGBC senator and MCAS ’18, a main organizer of the event. “Unfortunately, that is so much easier said than done.”

The caption of each photo describes each subject’s insecurity in detail, stating “I am not my ____.” By stating I am not my_____, “students acknowledge their insecurities, but do not let them define who they are.” Students can sign up on the event’s Facebook page.

“I chose to be photographed because the photo emphasizes that everyone has these troubles,” Joseph Arquillo, LSOE ’17, said. “It is time to be honest about the differences that affect us today.”

The project has created bonds between people, Arquillo said.

“Suffering in silence is something that one should not have to go through alone because feeling alone is something that we all can attest is not a good feeling,” Arquillo said. “Ultimately we are more than our scars and struggles.”

The What I Be Project has visited college campuses across the country, including Providence College, Cornell University, and Princeton University. Rosenfeld said that his initial inspiration for the project came while talking to a friend about an idea to share people’s insecurities without literally showing them.

“I decided that night that I wanted to photograph my friend with her insecurity written somewhere on her face or hands as a way to boldly displaying [sic] her greatest insecurity on her skin and fearlessly stare into the lens for a powerful headshot,” Rosenfield said on his website. “I wrote ‘thunder thighs’ on Amanda’s hand, alongside the photograph she came up with the statement, ‘I am not my body image.’ And thus, the ‘What I Be’ project was made.”

The What I Be Project first came to campus in the fall of 2014 as a part of UGBC’s “Be Conscious” campaign. The 2014 campaign was a success, with Rosenfield photographing over 70 students. The project invoked a strong, positive response from the student body, attracting thousands of views, likes, and shares on Facebook.

Molly Newcomb, MCAS ’18, co-director of the UGBC mental health committee and UGBC senator, said the popularity of last year’s campaign made it an obvious choice for this year’s UGBC agenda. Newcomb believes the best part of the What I Be Project is its ability to make students relate to one another.

“It completely shatters the image of the ‘perfect BC student,’” Newcomb said.