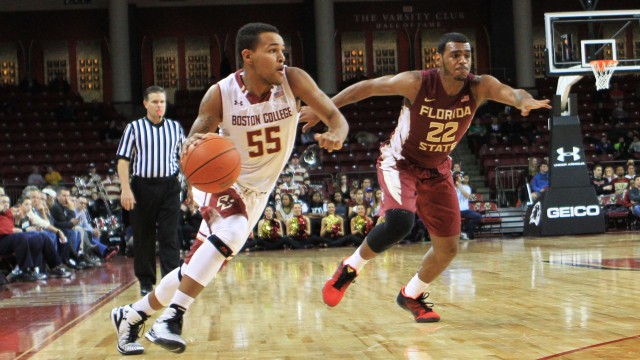 During one of the media timeouts, an announcer made his way to the BC logo at half court. Microphone in hand, he tried to fire up the crowd. Much to his dismay, no one was there to answer. His “We Are! BC!” chant fell on the empty seats of Conte Forum.

In front of a sparse crowd—official attendance was listed at just over 2,000—Boston College men’s basketball (7-13, 0-7 Atlantic Coast) dropped its seventh straight game to the Florida State Seminoles Tuesday night (13-7, 3-5) 72-62, in a sloppy, fast-paced affair. Though the results were again dismal, there were several positives hidden in the defeat.

Even Jim Christian agreed with that notion.

“That was probably, for 40 minutes, the hardest we’ve played in a while,” he said after the game.

1.) Jerome Robinson – Robinson had an excellent game, scoring 15 points on an efficient 6-for-10 shooting clip. For most of the season, he has impressed with his ability to get to the basket and finish through contact, as well as with his midrange shooting acumen.

Tonight, he impressed from beyond the arc, canning three of his four 3-point attempts, tripling his total from the first six games of ACC play. Robinson did most of his damage by spotting up on the weak side of Eli Carter’s pick and rolls.

Robinson utilized the general concept of the play above to hit all of his threes. Christian knew before the game that this particular shot would be open.

“That was what was going to be open today, because of how they guard the ball screen,” he said.

FSU had their center hedge hard on the screen, essentially doubling Carter. This left only Robinson’s man to bump Dennis Clifford rolling down the lane, which then opened up Robinson for easy 3-point looks. He was able to hop into the shot and set his feet, making the defense pay for its strategy.

2.) Eli Carter, Attacking – Though he still settled for too many isolation, pull-up threes, Carter demonstrated his pick-and-roll skills throughout the game. He totaled eight assists, with the majority generated by his penetration and its impact on the defense. In addition to the passes he made on Robinson’s threes, he had several nice dimes to his big men under the basket.

The play above demonstrates the patience Carter has developed in the pick and roll game. He drives into the lane and waits for Boris Bojanovsky to commit to him before dropping a pass to Idy Diallo for the layup.

Carter also used the pick and roll to score.

He does an excellent job of slowing down and keeping his defender on his hip, away from the ball. He then crosses over and puts up a floater before the defense can recover. Most importantly, the shot comes in rhythm. If Carter can incorporate more of this type of play into his game, forgoing a few ill-advised threes, he could open up even more looks for both himself and his teammates.

3.) Darryl Hicks – During ACC play, Hicks has gradually become a staple in the rotation. While his shooting range has not yet expanded out to the 3-point line, he has shown comfort with taking jumpers one or two steps inside the line. Twice against FSU, he capitalized on open looks generated by teammates, something the Eagles desperately need.

He also showcased aggressive, physical defense and tremendous hustle, constantly diving on the floor for loose balls and even getting a tip in on a missed shot among FSU’s big men, despite standing just 6-foot-2.

On a team that sometimes needs a bit more physicality, Hicks could be in line for a more prominent bench role as the year progresses, particularly if his offense develops further.

1.) Transition Play – FSU likes to play the game at a fast tempo. It allows guards Dwayne Bacon, Malik Beasley, and Xavier Rathan-Mayes to attack the rim against a backpedalling defense, picking up easy buckets. Stretches of this game turned into a track meet, with both teams sprinting the floor, throwing full-court passes and relentlessly attacking the rim.

In theory, this would be good for the Eagles, an offense that struggles mightily to score in the half court. Despite that, against FSU, BC’s fast breaks were very inefficient. Often the ball handler simply put his head down, barreling to the rim and throwing up a wild attempt, hoping for a foul call. Carter was guilty of this a few times.

Other times, the Eagles simply couldn’t handle passes or maintain their dribble on the break. These live ball turnovers allowed FSU to run the other way, allowing them to score 16 points off turnovers.

2.) Defensive Rebounding – In news that shocks nobody, the Eagles’ lack of size was again an issue against FSU. The Seminoles, whose players have the third highest average height in the nation, amassed 16 offensive rebounds, constantly beating the Eagles to the ball or muscling them away from rebounds.

Some of these issues were because Eagles’ played a 2-3 zone for some of the game. In the zone, rebounding assignments are hard to keep track of, often allowing opponents to grab a high percentage of offensive rebounds.

Regardless, these second-chance points helped the Seminoles score 36 in the paint and shoot 25 free throws. Bacon pulled down 14 rebounds, including five on the offensive end, proving too strong for BC’s smaller guards to handle.

3.) Free-Throw Shooting – BC ranks 330th in the nation in free-throw rate, indicative of both its lack of size and inability to get to the rim consistently. In addition, not only do the Eagles rarely shoot free throws, but they also struggle mightily to make them. As a team, the Eagles shoot 63.6 percent from the line, 320th in the country.

Against FSU, this season-long issue once again reared its ugly head. The team made just two of its nine free throw attempts, a feat that left Christian dumbfounded.

For the Eagles to win in the ACC, they will have to work on the little things, starting with the most open shots in the game.