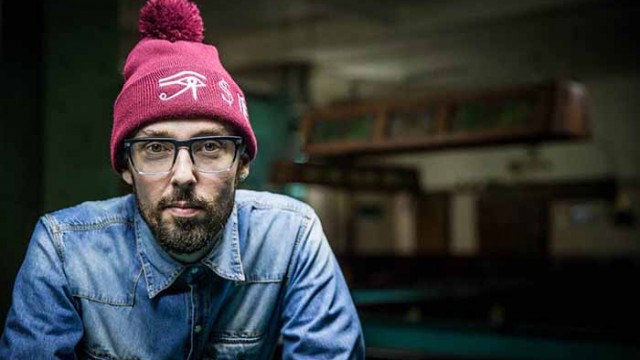 Hip-hop was once a creative engine of music and political messages, forged from the experiences of diverse communities in New York City and other urban centers around the United States. Like all great American creations—blue jeans, American democracy, the iPhone—it was exported around the world. And like these things, American hip-hop seems to have diverged and assimilated into popular culture.

Thankfully, the hip-hop of other countries has stayed on course.

Gas-Lab is an Argentinian multi-instrumentalist whose latest creation, a collab with MC Hache St. called Jubilo, is a refreshing, genre-defining mixture of diverse styles and musical influences. Listening to the album is as much an exercise in morality, culture, and regional politics as it is music. Granted, much of that political and cultural message will be missed by non-Spanish speakers. Yet Jubilo is enjoyable even to the average American’s ears. Hip-hop is about balance, and the balance between voices and instruments on the album is such that musical language takes precedence over spoken language.

Gas-Lab has produced purely instrumental albums in the past, as well as English-language projects. Jazz Hop, perhaps his most recognized work to date, could be brilliant, but was largely inconsistent. That project was incongruous—upbeat title tracks mixed with overly artsy interludes and mediocre filler content.

Since then, it’s evident that Gas-Lab has evolved not just as a producer, but as a musician. There’s more variety in the instrument choices, for example. The first track, “Reencuentro” (Rediscovery) is rife with crackling vinyl effects, piano backing, and maracas. Immediately following “Reencuentro” is “Primavera” (Spring), which includes jazzy electric guitar riffs and traditional cymbal accents. Perhaps the most experimental track on the album is the “Altas Montanas, Spoken Word” (Highlands), a french horn-headlined, synth-heavy ode to Haiti and its tragic history.

The diversity of the album’s styles is present in its featured artists as well. “Altas Montanas” contains a verse in French Creole from guest rapper Me-Stair. Several guest singers perform in English, and the final track features a pair of Mexican artists sharing the mic with resident MC Hache St.

The pacing of the album is slow and methodical. Jubilo is collected and calculated. The first four songs follow a similar formula of upbeat bass and drum beats mixed with slow, relaxing instrumental features. The fifth, “Principio” (Beginning) has quicker drums and more dominant percussion, but retains a slow, melodic chorus, meant to maintain a tonal continuity. After “Principio,” percussion remains strong for most of the rest of the album, while the speed of Hache St.’s lyrics seems to gradually quicken, building urgency and changing the tone, in such a way that, even if the listener doesn’t understand the lyrics, he or she will perceive an audible change in the music regardless.

Hache St.’s lyrics are not to go unnoticed, though. He touches on such major issues as racism in Latin America, with a line that translates to “black in plural, little white when single.” The treatment of immigrants in the United States is mentioned on multiple tracks as well: he wonders if he’d be questioned in the U.S. as an illegal immigrant, due to his heritage. He criticizes the U.S. immigration system as “failed reforms, like Perestroika.” Such references remind the listener that Jubilo—and hip-hop—are global entities with global awareness.

Despite the heavy content, Jubilo is the sort of album that can be studied to, chilled-out to, or even slept to. The music calls to mind sleepy jazz clubs of old, but to quote one of Gas-Lab’s stylistic influences, Guru, “there’s always a message involved.”

And it’s important that there is a message in Jubilo. All the greatest albums in hip-hop’s rich history have contained a certain message and captured a certain feeling. Music makes a listener feel a certain way, and hip-hop is no exception. Jazzy, mellow, intellectual hip-hop has existed for decades—just look at pioneers like Common, Gang Starr, A Tribe Called Quest, The Roots, and the late J Dilla. Modern.

“Smart rap” has fallen out of favor in recent years, and it’s a shame. Jubilo will not reverse this trend, and will likely not be listened to much in the U.S. because of the language barrier. Gas-Lab and Hache St., though talented, lack the name recognition or English-language connections to make it big here.

But Jubilo should not be ignored—it represents hip-hop in the world. As modern American hip-hop drifts closer and closer to electronic music, trap music, and pop, listeners must wonder if the rest of the world’s local hip-hop communities will follow suit. To that question, Jubilo is a reassuring, satisfying, and enrapturing “no.”

gas-lab
Bowie, Sia, and Coldplay in Singles This Week
“What I Be” Photo Campaign Returns to Campus for the Second Year